Jason Isbell is fast becoming one of the most respected songwriters of his generation. The former Drive-By Truckers guitarist has been publicly lauded by the likes of John Mayer and won numerous awards since his solo career took flight.

For his latest record Isbell has brought back his band, The 400 Unit, and kept his wife and respected solo artist in her own right Amanda Shires by his side on fiddle and vocals. The album is perhaps bravely titled ‘The Nashville Sound’ – in a market and scene that inspires a lot of debate ‘the Nashville sound’ is something that’s perhaps hard to pin down. Interestingly, on said debate, Isbell said some years a go “Hate to break it to y’all, but Nashville didn’t “ruin” country music. Lotta good burgers in this town; nobody forcing you to eat McDonald’s”. An astute view on a town which is full to the brim with fantastic talent – just not all of it is getting to the top.

Despite having the power of The 400 Unit Isbell kicks off the record with the slow and thoughtful ‘The Last of My Kind’. This song almost carries on where Isbell left off on his last record ‘Something More Than Free’. The picked acoustic guitar rolls along as Isbell sings and takes us on a journey through his hometown where he wonders just what went wrong and how he was left feeling so alone and alienated. Maybe the song is a statement about Nashville and how the traditional songwriting acts like him have been ignored for so long? Whether it’s about Nashville or not this tender ballad makes you feel Isbell’s loneliness and how lost he truly feels in this world.

‘Cumberland Gap’ follows up ‘The Last of My Kind’ in rollicking fashion. This big and brash number with it’s driving distorted guitars and soaring chorus was the lead single to the album. Lyrically it’s very similar to it’s predecessor as Isbell sings about a dying town and a world that is changing for the worse. Isbell touches on music in the line “there ain’t much money in an old time mandolin, so I’ll cash my cheque and I’ll drink until I’m on my ass again” which maybe hints to his problems with addiction in the past and that familiar sense of not fitting in. One of my favourite lines on the record comes in this tune as he sings “when the sun goes down I’ll make my way to the Mustang Lounge, if you don’t sit facing the window you could be in any town” – this sums up the working class struggles of a small town and its faceless bars and repetitive cycle of life.

Next up is ‘Tupelo’ where things take a little step back from the previous in-your-face track. This song is beautifully written and tells the story of someone escaping their problems both metaphorically through drink and literally through moving to a different town – “there ain’t no-one from here that’ll follow me there” sings Isbell in the chorus however the singing discovers that the sepia toned blissful view of a girl from his past was not accurate “kept her close but way too close to me, she never lived up to my memory”. It’s these types of character songs which really make Isbell stand apart from other songwriters.

The chugging guitar lines of ‘White Man’s World’ lead us into another song which acts as a social commentary on the plight of the nation and the people living within it. Isbell examines the prejudices and disadvantages that still exist. The song itself doesn’t point fingers and instead acts as a call to arms and pulls people together – “there’s no such thing as someone else’s war… we’re all carrying one big burden, sharing one fate”. The song slowly chugs along and it feels like the music is supporting that idea of a turgid and bleak system that isn’t changing.

‘If We Were Vampires’ is another acoustic driven number which just shines through with its lyrics. It’s not an easy thing to do a more quiet and subtle acoustic folk song and it really means that the lyrics have to stand up on their own – this song does it with aplomb! Producer Dave Cobb famously said that when Isbell told him about this song his first question was “dude, please tell me that you’ve not been watching Twilight?!”. Thankfully the answer to that question is a firm no! Instead the song gives us a twist with Isbell examining the idea that, if we had an infinite amount of time on Earth, we wouldn’t take the care to tell each other how we feel or make plans to make the most of our time. “If we were vampires and death was a joke, we’d go out on the sidewalk and smoke, laugh at all the lovers and their plans, I wouldn’t feel the need to hold your hand”.

Next up is ‘Anxiety’ and the band come back in with a big noise. The roaring power chords at the start of the song break into a more subdued verse. Again, this is a song where the music almost moves in a way that reflects the content of the lyrics with those quiet parts juxtaposing with loud and hard hitting parts. Lyrically it’s certainly a song that’ll resonate with anyone who has suffered from anxiety with ideas that delve into the feeling of a “a crowded room is a burning battlefield” and the frustration laden “I can’t enjoy a god-damned thing”.

‘Molotov’ is a song that, as they all have, hits me with it’s lyrical content however leaves me wanting slightly musically. I have to say at this point there are one or two that feel like that. The great lyrics just lack the punch that they deserve from their musical accompaniment. This feels like a song that is reflecting on life and having regrets about not following through on the things that you’d set yourself. Lines such as “I made a promise to myself, to ride the throttle ‘til the wheels came off, burn out like a Molotov, in the night sky, I made a promise to myself, made a couple to a brown eyed girl, who rode with me through the mean old world” show this retrospective feeling.

Track eight, ‘Chaos and Clothes’, is a song that’s apparently a tribute to his close friend and the man who took him to rehab Ryan Adams. The song is littered with references to Adam’s lyrics and refers to his recent divorce. The line “you’re in a fight to the death my friend, black metal t-shirts your shield” is one of my favourites and refers to Adam’s sense of style.

‘Hope The High Road’ is one that’ll go down as one of my favourite songs of the year. After a couple of songs where there was something musically missing for me this one comes smashing through. The 400 Unit are in full flight again with a resilient Isbell who has seen enough negativity and just wants to take the high road. It’s lyrically spot on and also has one hell of a slide guitar solo which is where Isbell really comes into his own. Having had a pretty shitty year last year myself this track almost feels like a call to arms for those of us left on our knees by things that went on in 2016 (whether it be in our personal lives or in the political spectrum) “so if you’re looking for some bad news you can find it somewhere else, last year was a son of a bitch for nearly everyone we know, but I ain’t fighting here down in a ditch, I’ll meet you up on the road”. It’s a song that can be taken to mean a variety of things depending on who the listener is. As a personal message it’s one that can help pick you up off the floor and as a political message it’s something that can keep us all fighting but to do it in the right way. As Isbell himself said “I want [listeners] to feel encouraged to be vigilant but to still stay classy, for Christ’s sake. If you’re doing too much yelling and too much screaming and acting out of frustration, you’re not effecting change in any positive way.”

The album is closed out by the sweet folk song ‘Something to Love’. This romantic song closes out the album as a message to his daughter and almost feels like a lullaby. It’s a really beautiful acoustic number where Isbell and Amanda Shires sing in harmony to their daughter. The main theme of the song is that life is tough and the world is changing but the most important thing to do is to find something that makes you happy and pursue it. It clearly comes from a special place as a father and the outpouring of love on the track is obvious. 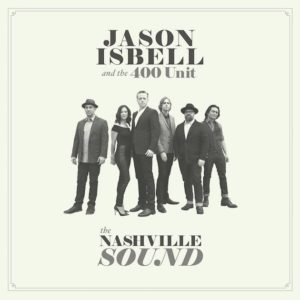 ‘The Nashville Sound’ is a real statement from Jason Isbell and the 400 Unit. It’s a record which is chock full of beautifully written and poetic lyrics which touch on a range of subjects that the listener can relate to. There is a lot of bleakness in the lyrics and songs like ‘Cumberland Gap’ and ‘Last of My Kind’ speak of loneliness and hopelessness whereas ‘Anxiety’ seems like a personal story of personal struggles. It should be said that Jason Isbell himself is quick to point out that not all of his songs are autobiographical; sometimes he chooses to write from the perspective of a character in a story. Though the lyrics are some of the best that Isbell has produced there were a few tracks where the music let me down slightly. Despite having his band The 400 Unit back on board some tunes just chug along a little and don’t quite grab me. Maybe this is just me though – I absolutely love the punch that is packed in ‘Cumberland Gap’ and ‘Hope the high Road’ and would love to see more of this however some fans may prefer the more folky songs which match Isbell’s previous work. Going back to the quality of song craft on offer there are very few who can match Jason Isbell. Becoming a father and reuniting his band has clearly had a good effect on him and this album is just the start of that journey.

Cumberland Gap, If We Were Vampires, Hope The High Road, Something to Love