Red hat, sleeveless shirt and some fine music. That’s Kip Moore. One of the most underrated country artist was first introduced to the UK in 2015 during Country To Country. Since then, he sold out his first UK tour, causing him to promote to bigger venues, and announced another UK and US tour supported by Drake White. And this Friday, the new and highly anticipated album, Slowheart, will finally see the light of the day.

Constantly on the road, either travelling from one city to another for shows or for surfing trips, Moore started recording this album in-between his travels without the knowledge of his label. This gave him the opportunity to create and produce exactly the kind of music he wished to do. The album is a mixture of old and new, with Moore inviting some of his fantastic writers, Westin Davis and Dan Couch, both of which have feature on the previous two albums. However, for the first time, this album also includes songs that have not been co-written by Moore, yet they still have that rock attitude that Moore can deliver with ease.

This song of the album, Plead The Fifth, is a mid-tempo and electric guitar driven track which can almost be seen as a continuation from Moore’s previous album Wild Ones due to its intense and rock-fuelled chorus but slower and relaxed verses. This anthem-like chorus makes Plead The Fifth not only the perfect album opening song, but it can absolutely be the opening song for live shows. I can already see people holding their beer bottles up high.

Another contender for live show opening song is Just Another Girl. Similarly to Plead The Fifth, this track is lifted by its incredibly energetic chorus with Moore’s whiskey-soaked hard vocals. Electric guitar riffs and that unique voice of Kip Moore in Just Another Girl will take you back to 1970s rock, something that suits Moore so well, and it will leave you thinking that this album is definitely one of those that you simply cannot get enough of.

I’ve Been Around is in a way a funny and laid-back song at first listen, with Moore singing about his lifestyle of non-stop travelling and sometimes giggling when singing about hanging out with supermodels and experiencing other celebrity lifestyle. The lifestyle in this song is so far away from what Moore actually represents, therefore I’ve Been Around actually showcases some very clever writing by not taking seriously lavish lifestyles but still appreciating the experiences. The playful melody reflects the lyrics but also keeps up with the ‘70s rock base of this album.

Classic Kip is what Fast Women sounds like. Moore’s raspy vocals perfectly interpret these very personal lyrics which speak about his life as a single guy while all of his friends are settling down and asking him whether he is still making ‘that noise for the fans with that rock and roll band’.

The happy toe-tapping melody of Bittersweet Company tricks you into thinking you are listening or singing along to cheery and uplifting song. Actually, the lyrics talk about something completely different – they reflect upon a relationship that suddenly ended without any significant reasoning. In a way, this song reminds me of the Motown era where the melody was always so uplifting despite sensitive and sad lyrics. For Moore, Bittersweet Company is surely a reflection of this era he grew up listening to, therefore this song offers you an individual spin on the influence of Motown.

Even more of a Motown throw-back is the track Good Thing. With the sound much less based on guitars, and more rhythmic than I remember Moore ever singing, Good Thing is a perfect sing-along for any occasion. Whether you are driving a car, cooking a dinner or singing at the top of your lungs at Moore’s concert, Good Thing will get you going!

Top 15 single More Girls Like You and fantastic song Try Again take Kip Moore from being a wild country rocker who is hard to tie down to romantic country boy. Hard to imagine on paper but do you remember songs like Hey Pretty Girl or Crazy One More Time? Although, this time around, a romantic song does not mean a slow song, especially not for Kip. Both, More Girls Like You and Try Again, can make great acoustic songs for Moore’s live shows.

The Bull, another song which was not written by Moore but it joins the club of tracks such as Plead The Fifth and Just Another Girl, which reflect Moore’s musical authenticity. The Bull can easily become a go-to song for everybody who is struggling and needs that extra bit of motivation. The Bull is about Moore’s struggles as a musician but also about the joy of proving the critics wrong. This song is easily relatable and gives a chance for everybody to find themselves somewhere in the story.

Luckily, Kip Moore likes to play a lot of his new material during his shows to see how the crowd responds. Last Shot, a heart-warming ballad, was first introduced to fans last summer and was an instant hit. Although, Moore likes to play this song acoustically, the album version of Last Shot is just something special. With heavy chorus and a wide range of instruments including piano (quite unusual for Moore), Last Shot’s melody has aspects of rock power ballad. Intimate lyrics that speak how truly special one person can be lift the song even further. Even though Slowheart is a damn good album, Last Shot brings it a whole new level of great.

Talk about saving the best for last. If you’re a fan of Kip Moore, I am certain you have heard of Guitar Man. An insight into Moore’s early career but also insight into almost every musician’s career when they are struggling to get by.

“/No drums, no pianos, no sweet harmonies/ it’s all in a song and it’s all on me/ You wont find nothing fancy, I’m a tired one-man band/ I’m a picking and grinning guitar man/”

When you first hear this song, you listen to a story with a timeline, you listen to a man describing his life. Personally, I thought these lyrics were so beautifully written as they showcase all of Moore’s emotions. Every verse is a different chapter to the story, a very unique way of writing. And then, the melody hit me. Guitar Man starts off with an old guitar riff here and there, which underlines certain parts. As the song progresses, the riffs intensify and you can also hear keys in the background that help carry the melody towards the end of the song. This simple arrangement is so touching, it would make you want to listen to the instrumental version too if there was one. A masterpiece of a song. One that comes along maybe once in an artist’s career and it puts Slowheart into a league of its own. 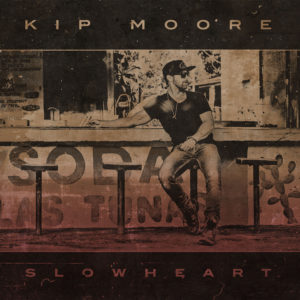 The album is filled with with clever lyrics and fine storytelling, a talent that is so hard to find but Moore does it with such ease. Slowheart will take you on a journey that explores influences from different genres and eras, from 70s rock all the way to Motown. However, the clever arrangement always finds only the best parts from each of these influences and creates something new and unique, yet something absolutely true to Moore. An album that does not chase fame, but one that should be acknowledged as a great reflection of an artist, with game-changing songs like Guitar Man. Slowheart is a definite sing-along from start to finish.