You’d have to be hiding under a rock if you’ve not heard at least murmurs of Midland – the country trio that are currently taking the genre by storm. Comprised of Mark Wystrach on lead vocals, Jess Carson on lead guitar and Cameron Duddy on bass this three piece of friends from Texas all met serendipitously at a family wedding and have found themselves on a whirlwind journey. In a genre that is crying out for a return to it’s more traditional sounds the band have rocked up with their colourful suits, cowboy hats and nods to the likes of George Strait and The Eagles to take things back. It was only earlier this year when their debut EP was released but, such has been their success, the three piece are now steaming back with ‘On The Rocks’ – their debut album produced by Shane McAnally, Josh Osborne and Dan Huff.

The album opens up with the country tear-jerker ‘Lonely For You Only’. This track sets the stall out for the type of album that we can expect to follow. The song is co-written by the band with Rhett Akins and Josh Osborne and transports you back to the 1980’s with its smooth music and vocal harmonies. Midland are a band that immediately make you feel as if you’re listening to them in a smoky dive bar and the lyrics convey the desperation of an old country singer pouring his heart out over his lost woman “I run to the blinds and look out my window, and hold my breath every time a car drives by, and I don’t want no other heart to ever own me, no, ‘cause I’m only lonely for you”.

The bands latest single is up next in the form of the rollocking ‘Make A Little’ which was written with McAnally and Osborne. The band give a nod to Alabama with their soaring harmonies on this country rock ‘n’ roll number. It’s the type of song that will get you up and dancing around the place. Lyrically the song is a positive message in trying times “there’s just not enough love in the world, so we should make a little, conjugate a little, maybe even make the world a better place a little”. This is the type of country music that has been sadly missing for a long time and brings the honky tonk sound back to Nashville!

Next up is the bands breakout song ‘Drinkin’ Problem’ which, just like ‘Make A Little’, was written with McAnally and Osborne. Lyrically this is one of my favourite songs to have come out in recent years. It takes the classic country drinking song which has been turned into a good-time-party-in-a-field thing in modern country and sticks it straight back into that smoky old bar. Wystrach sings about finding the solution to his problems at the bottom of a bottle “people say I’ve got a drinking problem, that ain’t no reason to stop” immediately gives me the image of the old grizzled cowboy throwing back the whiskey but being more than happy “sitting here in all my grand illusions, they call it a problem I call it a solution”. This song is the perfect example of how Midland have taken classic old country music themes and modern country ideas then stuck them together to make a hugely relevant but definitely throwback sound.

‘At Least You Cried’ comes next and again showcases the bands superb knack for writing catchy lyrics that feel almost like stories. This song is all about a woman ending the relationship and having tears in her eyes but the whole thing not really being believable however saying, oh well, at least you made the effort of crying. It’s the perfect break up song written from the male perspective that’s kind of saying “cut the sh*t”. The band sing about how “these words on your lips sound good but they don’t quite fit” over soaring honky tonk country. Everything about the bands sound on these tracks is traditional yet it somehow sounds more relevant than the latest hip hop infused country number one!

I mentioned earlier about certain songs sounding like they are coming from a smoky old bar and ‘Burn Out’ continues that theme. The album itself could almost be a concept record set on one night in the same bar with the stories of either one or many people being told. ‘Burn Out’ takes the tone back to tear jerking lonesome country. The lyrics are absolutely heartbreaking and are backed up by the mournful pedal steel. This song has all of the makings of a modern country ballad classic “watching rivers run, down the side of my bottle, almost like it’s crying my tears, had the world on a string then I lost everything and that how I wound up here” is just teeming with superb storytelling. Awesome stuff.

The next song is one of my favourites on the album in ‘Out of Sight’. It’s another great slant on a country break up song and once again plays with those clever lyrics. McAnally and another of Nashville’s finest songwriters, Luke Laird, helped the band on writing duties for this one. The band show off their harmonies again on this mid-tempo number and it’s the type of song which looks back at a lost love with sadness but also a cheeky upbeat feeling. This juxtaposed upbeat sound with the lyrics where Wystrach sings “everybody knows that she’s out of sight and I’m outta my mind” fits and gives you that feel of deep heartbreak but a strange euphoria when going out of your mind. I particularly love the line “all the kings horses and all the kings men couldn’t put me and my baby back together again”. The song swings, sways and keeps your foot tapping.

‘More Than a Fever’ is a down and dirty love song about being infatuated with someone and the way that it makes you hot and sweaty with a “devils grin”. It’s the type of song that will have couples twisting and holding each other close as the band perform it.

Next up is a tune which was written solely by guitarist Jess Carson. ‘Check Cashin’ Country’ reminds me of Bob Seger in the way it’s a road song about the trials and tribulations of being in a “travelin’ band playing country western”. It’s an upbeat number that tells the story of having no money and travelling from town to town playing shows whilst trying to keep your family back home. Midland are obviously a band born of the hard touring dive bar culture in Texas and this song could almost be autobiographical.

Many of the songs on this record have focused on the stories of people within the bar and ‘Nothin’ New Under The Neon’ is all about the bar itself and how it’s the place where friends can meet and put the world to rights. It’s an honest look at going back to your hometown and finding that nothing has changed in the local bar and never will change. “Nothin’ new under the neon, same old stories, the girls and glory… Who knows when we’ll be back here, How many miles, how many years” sums up the nostalgic mood of the song. One of the stand out lines for me is the heartfelt “remember when you lost your father, we blew through a couple hundred dollars”. It’s a song that reminds you of those safe places with the faces that you know and makes you feel that warmth.

‘This Old Heart’ is an upbeat song that appeared on the original EP from the band. It’s a song that basically sums up the up and down heartache of the album and talks about needing a break from heart break. “This old heart needs a break, this old heart’s had all it can take, it needs a little less wreckin’ and a lot more affection” sums up the cry for a peaceful and positive life in this song.

We get a nod to John Denver in the weed smoking, fun song ‘Altitude Adjustment’. It’s a song about heading away from “Tennessee blues” and over to Colorado for a change of scenery and to get high to escape your problems. This is a great song on the record and is one of the few times that we escape that dive bar feeling in other tracks. It fits nicely with ‘This Old Heart’ before it and follows on perfectly almost like the character in that song has now left town and is travelling around getting away from all of the heartbreak.

‘Electric Rodeo’ kicks off with piano and sweeping strings before leading into a big chorus. It’s a song similar to ‘Check Cashin’ Country’ in that it tells the story of a band on the road. It also specifically mentions those things that Midland are on a quest to bring back such as rhinestone suits and cowboy boots.

The last song ‘Somewhere On The Wind’ is reminiscent of the Eagles – particularly with the harmonica intro. It’s a classic country cowboy song about a modern day drifter who hates to say goodbye to his woman but just knows that his place is out on the road. It’s a poignant end to the album and shows all of the heart that the band bring to their music “I already miss you, so baby let me kiss you, ‘fore I head back to where I’ve always been, somewhere on the wind”. It’s the ideal end to this debut album and sends the listener away with yet another slice of traditional country music which has been brought into the modern day.

1. Lonely For You Only 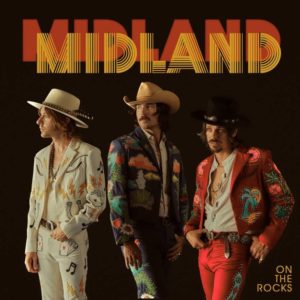 This is country music. There’s no other way of putting it. Midland are doing something with their music which I genuinely don’t think has been done so successfully for a long time. The record is perfect track for track and there are no points where you want to turn it off or skip on to the next one. It’s absolutely brimming with atmosphere and, as I keep saying, transports you to places with it’s lyrics. You feel like you could be sat in the corner of a dusty bar out in the desert just watching these stories unfold in front of you. The band have clearly taken their influences such as The Eagles, Dwight Yoakam, George Strait and more and put them into their music but with their very much unique own twist. The songs are so well written and that is in no small part due to the fact that the band were involved in writing every track and had such heavyweights as Shane McAnally, Josh Osborne, Rhett Akins, Luke Laird and more involved. Having Dan Huff play a part of the production duties means that Midland had assembled somewhat a ‘dream team’. I truly think, and this may cause a stir, that this album is one of the best that we’ve seen in over a decade. One thing that I can be sure of is that it is one of my favourite albums of all time.

Make A Little, Drinkin’ Problem, Out of Sight, Somewhere On The Wind

2 thoughts on “Midland – On The Rocks: The three piece throw things back and dive bar country never sounded so good!”