Now on his fourth country album since the Hootie and The Blowfish lead singer, South Carolina resident and now Opry member Darius Rucker went solo it’s fair to say he has become established as one of the genres modern greats. Always maintaining a traditional sound and really making his mark with a cover of Old Crow Medicine Show’s ‘Wagon Wheel’ Rucker has shown the kind of versatility as an artist that many can only dream of. This year sees him return with his latest record ‘When Was The Last Time’ and we took a listen.

The album kicks off with the uplifting ‘For The First Time’. Driven along by hand claps and a thumping beat the song is a great vehicle for Rucker’s smooth vocals. Lyrically it’s all about taking a chance in life, doing something different and following your heart. It’s got that typical Darius Rucker blend of traditional country sounds and his pop sensibilities.

Next up is ‘Bring It On’ which is a typical soaring ballad from Rucker with a huge chorus. It’s another song drenched in positivity where he sings about all of the things that he loves about someone and how he’s ready to take it all on. It’s another example of Rucker crossing those catchy pop hooks with country balladry.

‘Life’s Too Short’ kicks off with the banjo and takes us on a jaunty walk through a hot Southern Summer day. It’s got another great sing-a-long chorus where Rucker sings “I don’t like this living I love it, sweet magnolia sky up above it, I don’t call Carolina just a place I live I call Carolina home”. This nod to his home state and appreciating life and its briefness is just what the world, and in particular the country music world, needs right now.

Track four was the lead single from the album and is one of my favourite songs of the year. ‘If I Told You’ is a powerful and introspective ballad where Rucker wonders if he would be accepted by someone if they knew his past and all of the mistakes that he’s made. It’s a song that we can all relate to lyrically and is sung with that real passion that Darius Rucker can convey in his voice. The chorus of “If I told you all the stupid things I’d done I blamed on being young, but I was old enough to know I know, if I told you the mess that I can be when there’s no one there to see, could you love me any way?” hits you like a jack hammer just like the opening verse where Rucker sings “what if I told you there’s no fixing me because everybody’s already tried?” This is country balladry at it’s very finest. No surprises that Shane McAnally has a writing credit on here…

Another big arena filling anthem hits us next in the form of ‘Don’t’. It’s another song with a big old chorus that’ll get the crowds going at live shows and you singing along at home. It’s lyrics tell someone to leave their insecurities behind because the love between them will never change. “Every single morning my eyes fall open on you, it’s like my dreams keep going on and on and on” is song like a true country love song. It’s got a big old guitar solo too!

Rucker gets a little reflective on the thoughtful ‘Twenty Something’. This is a chilled out and relaxed tune with clever lyrics looking through every decade of life and almost laughing at how people change through time. Much like the other songs on the album it switches between well written verses and big choruses.

‘Straight to Hell’ is up next and this cover of a classic recorded by Hank Williams III features a few familiar names! Luke Bryan, Jason Aldean and Charles Kelley all join Rucker in taking turns in the verses. It’s real honky tonk music and gives a nod to Darius Rucker’s influences. Great fun.

Up next is ‘Count The Beers’ and those fiddles and twanging guitars stick around for more honky tonkin’! This fun song will get your toe tapping as Rucker sings about his good woman who lets him go and out his have fun but just isn’t his old love. It’s musically quite traditional and has a great slide guitar solo in there. “It might not be love like our love was but girl that’s alright because she don’t count the beers I drink at night”.

‘Another Night With You’ slows things down a little with a romantic acoustic guitar and pedal steel sitting under Rucker’s smooth vocals. It’s a great change of pace from the previous songs and adds a nice slice of swing onto the album that really complements Rucker’s vocals.

Next up is ‘Hands On Me’ which keeps the tempo a little slower and get’s things a little steamy with lines like “turn the lights off, pull your jeans off and put your hands on me”.

The penultimate song on the album is ‘She’ which has a great relaxed Southern feel to it. You could almost imagine a group of performers playing this around a campfire especially with the catchy sing-a-long chorus “and she’s old black water, she’s Southern Comfort, she’s sweet magnolia sugar cane”. It’s a great little love song and really leans on those traditional country influences.

The final track on the album is another cracker in ‘Story To Tell’. It’s a fun and happy almost autobiographical song for Rucker who looks back on his life growing up and becoming a performer. It’s yet another big old catchy chorus and I love it! As Rucker sings “if I ever get to Heaven I’m gonna have a story to tell” you feel uplifted and positive that, whatever you may do in life, it’s all part of creating a great story! 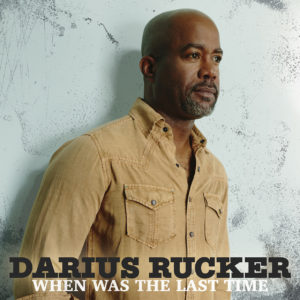 Darius Rucker just seems to get stronger with every country album that he releases. This album is a fantastic mix of arena sized anthems, heart breaking balladry and smooth love songs. There are some amazing lyrics on offer which is shown in songs like ‘If I Told You’ and ‘Story To Tell’ where the listener can relate to the stories and feelings that Rucker tells. It’s amazing just how many of these songs have fantastic choruses that just catch you and make you want to sing along. By this time in his career Darius Rucker is considered a great of modern country and this album only solidifies that position.

If I Told You, Don’t, She, Story To Tell