Travis Meadows is a name that may be familiar to some country fans but probably wont to most. He’s a legend in Nashville and has song writing credits for Jake Owen, Eric Church and Dierks Bentley (that list should be longer!). If you’re looking for a man with a story to tell then Meadow’s is the perfect person. He was an orphan

who became a preacher, lost a leg to cancer, then having struggled with and overcome addiction found his way to this – his debut album on a major label ‘First Cigarette’.

The album kicks off with ‘Sideways’, which is an acoustic guitar driven song that has Meadow’s world-weary vocals over the top of it. This song is a full on punch to the gut. The song is hopeful yet remorseful as Meadow’s sings about how bitter roads can become highways and gives advice for those who are feeling stifled or struggling in life. This is the perfect introduction to Travis Meadows and his music. The lyrics, stories and emotions are the heart of this man.

‘Pray for Jungleland’ comes next and we are transported, through a long outro to the previous song, into more upbeat and rocky territory. It’s impossible not to draw comparisons with Bruce Springsteen in Meadow’s rough and ready vocals, which is interesting as he name checks The Boss. This song is a look back to being young and going out on a Friday night without a care. It’s a hopeful but misty-eyed look back at days that are gone.

Next up is ‘McDowell Road’ which slows things down a little bit. It’s a mournful and regretful song about taking life for granted when you’re young and thinking that you’ll live forever. Some artists try to sing about regret in life but when Meadow’s does it there is a searing believability to it. “When you’re young you don’t think about getting old” is testament to something that we can all relate to.

The title track ‘First Cigarette’ offers a rawness where Meadow’s sings “I am a little more content with who I am and who I was, I have learned to love the comfort when it comes, like a first cigarette in the morning buzz”. The verses are sparse and thoughtful and the pain and struggle comes across as he sings, “I keep trying to get high”. The tune ticks along at the same tempo all the way through and really lends to the tone of the song.

‘Travellin’ Bone’ is up next and has the feel of a back porch blues. The acoustic guitar chugs along with the banjo weaving in and out. In the song Meadow’s almost tries to justify his reasons for always leaving and moving on as well as talking about his job as a travelling musician and how it keeps him alone. It’s another hopeful song as Meadows sings “I’ve gotta believe that there’s a reason that keeps me moving on”.

The next track is a favourite of mine from the album in ‘Underdogs’. It’s thumping beat will get your foot tapping and the big chorus is almost stadium sized and Springsteen-esque. It’s a song that brings together all of those people who, like Travis, people have written off or have had to come through the hard times. The chorus of “We are the underdogs, we may fall behind but we rise, we climb and we shine like broken stars” is a call to arms for all of those people who have suffered or struggled. Again, what makes this so believable is that it’s coming from a man who has truly lived this and not just any Nashville hired gun.
‘Pontiac’ is another rocker. It chugs along in the opening and you can feel that it’s building into something big. This is another positive spin on the hard times and remembering to use them to provide perspective in the future. “I hope you get your heart broke at least once before you fall in love, I hope you wind up flat broke at least once before you have enough, hold on to some innocence through the almost and the could-have-beens” is a life lesson that many of us could learn from and use in life.

Track eight slows things down slightly in the form of ‘Hungry’. This song is soothing and reaffirming as Meadows tell us to stay hungry for the things that we want as they’ve kept him alive. The big chorus is a fist in the air type of moment which fills you with a sense of belief in yourself and who you can be. As Meadows sings “my good intentions never got me much, but the stubborn part of me that pushes things that will not budge, that’s the me that keeps on dreaming when the other stops believing, neither one is ever satisfied” the listener can start to feel invincible.

‘Better Boat’ has a haunting guitar intro that leads into another soul baring song about recovery. Meadows sings about smiling more despite the pain and having friends to talk to. It could be the theme tune for addicts who are pushing through the barriers of their problems and can’t see that light at the end of the tunnel.

The penultimate track ‘Guy Like Me’ picks things up with a jaunty acoustic guitar and beat. As the album is closing out it feels like Meadows is at the end of the journey that ‘First Cigarette’ has led us on. The refrain of “I’m doing alright for a guy like me” is sung with genuine satisfaction as he lists the good things in life whether it is as small as having a cigar on the patio or a song on the radio. It’s uplifting and punchy.

The album closes out with ‘Long Live Cool’, which kicks in with a wailing harmonica and is oozing the blues. As opposed to the rest of the album this song doesn’t look introvertly at life but celebrates the blues, rock ‘n’ roll and everything that made those things cool. Backed with some great gospel vocals and a mean guitar solo this song is a superb way to end the record. It’s proper rock and roll! 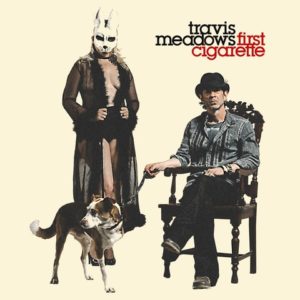 This is a life affirming record. The lyrics come from a place of knowing and a place of pain and hope. Travis Meadows is not just some country singer who sings about subjects that sell records – he’s a songwriter that sings about life in a way that heals and helps. It has to be said that Meadows clearly isn’t trying to write a self-help record and it’s obvious that his strength and healing comes from speaking his truth. It’s testament to the karma that can and does exist in the universe that this man, after all of his troubles and strife, has released his debut LP on a label. Most importantly of all these songs can help people who are struggling in life no matter what their situation. Meadows sings genuinely about going through hard times and coming out of the other side with such raw emotion and feeling. He dares to bare his soul in a way that makes others understand that they’re not alone and they’re not without hope. This album probably wont be a huge success in the country charts or in Nashville but the mere fact that Travis Meadows has been given a platform and in using it in this way means that, as long as it reaches the ears of one person, it’s a success.