Just a year ago Walker Hayes was working in Costco having been dropped from his label Capitol Records. The father of six was starting to think that the career that he dreamed of in music was long gone. On 8th December

2017, having been picked up and signed to the revived Monument Records label by Shane McAnally, Walker released his debut record ‘boom.’ We chatted to him in Nashville via the phone on the day before the album came out.

Hi Walker, thanks for spending some time chatting to us today. ‘Boom.’ is released tomorrow. How excited are you for the album to get out there?

Oh yeah! I woke up and we were counting down, you know? Three days, two days, one day and I can’t believe it! Honestly, I just can’t! I can’t imagine, I’m sure tomorrow wont be that much different than today except my album will be everywhere. In stores for people to get, it’s such a new thing to me and I don’t even know what that’s going to be like! Man, I’m so excited, it’s been a long journey to have this happen and I couldn’t be more thrilled.

It must exciting for those fans too who have followed you for years and can now finally get hold of the CD?

Yeah. It was only yesterday that I actually picked up and held my first CD, a physical copy of it, I’ve been so kind of around the world lately that it was surreal to just sit there and look and it and think that there’s going to be thousands of those around and that’s what people are going to hold when they buy it! It was awesome and it looks great – I’m so proud of it! There are so many people who have been working so hard to make it look so great and to make it just kind of be everywhere.

The single ‘You Broke Up With Me’ has had some great success on country radio. That must be encouraging ahead of the album release?

Oh yeah! That’s the plan I guess, you know, when people drop albums if they have a single kind of beginning to peak at least. I could not imagine better timing in the way that it’s all worked out and you’re right ‘You Broke Up With Me’ has been such a big song and continues to be. It’s without a doubt the biggest one that I’ve ever been a part of.

This isn’t your first album with the previous record coming out in 2011 however a lot has changed since then. Does this almost feel like another debut?

You were with Capitol Records which didn’t work out in the end. Has it been hard to keep your faith that this day would come?

Yeah, you know, there were years where I worked at other jobs, I worked at Costco for a year which was kind of my last ‘other’ job. Yeah man it was definitely hard to look myself in the mirror and not laugh at me! A lot of people will probably do that. It didn’t make sense for me to continue devoting a lot of my life, time and energy to writing songs that nobody was hearing, nobody was cutting and no one wanted to hear me sing them at the time. From outside looking in I looked a little bit foolish – as dreamers do! – I feel like that’s kind of part of the weeding out process of dreamers and why not everybody has a job singing or writing. You’re exactly right there were times where I was definitely considering throwing in the towel and making a little more sense in society.

I agree with that. That really is the difference between those who do and don’t make it. People who just don’t give up…

Yeah and I consider myself one of the few where not giving up actually worked out. Unfortunately the sad truth of Nashville and the truth about giant dreams, whether you want to play professional sport or be a painter or a singer or whatever, the truth about it is that out of a hundred people maybe one is gonna actually see that dream come to fruition. I am so fortunate that I get to do this. I know so many singers and songwriters that are so much more talented than me that went home and their music will never sit on the shelf but, you know, tomorrow mine gets to and I’m just savouring every moment.

Moving back to the album. For people who don’t know Walker Hayes how would you describe your sound?

I would say, just from hearing a lot of peoples responses from the advanced copies that we’ve released, is just that the common response is that it’s shockingly honest. I think the common thing from me as the artist and the label is “this music is really me”, for once I got to got to make the music that I wanted to make, this is really who I am. I feel like I’m fortunate to say that about this music. The project really is a reflection of that – all of the furniture in it is truth – the details are all about my life and it’s very specific. It’s very quirky to my style and it’s very different and unique. I recognise that a lot of people have never heard anything like this and I love that! It’s a good mixture of every influence musically that I’ve ever had with my spin on storytelling.

You’re now on Monument Records and working closely with Shane McAnally. How important has he been in getting you to this stage of your career?

So important! He is single handedly the one who plucked me from the depths and kind of gave me the chance. Not only did he do that but, by being signed by him, nothing was imposed on me to look, sing, act or write in a certain way. He just wanted me to do me. That was hard to get used to! It took me a couple of months to really go there and dig deep inside my soul and be that honest. It’s all Shane! That is all Shane taking the reins off and saying “man, I signed you to do what you do! Right now you just create it!” I truly wish that every artist had the opportunity to make music that free!

You can feel that when listening to the album. I feel like I don’t need to have a conversation to know about you because the album tells all…

That is the biggest compliment! Thank you! It takes a lot to get there and I appreciate that.

You have writing credits on each song on the album. These songs are clearly all from a personal place for you. It must be tough, I read that you have a big family of six kids, it must be difficult to balance?

Man, after three it was never really that different. It’s a unique lifestyle. When we started my wife and I chose to not wait until things make sense. If you waited for the perfect time to get married and have kids then we’d all wait our whole lives because it never really makes sense! I’m so glad we did it and I love my children, they have such a unique childhood with what I do for a living and the dream that I’m chasing. I’m so proud that they’ve gotten to see this little bit of success for all of the hard work that my wife and I have put into this job. I’m so happy that I get to write about them.

Let’s talk about your live show for a moment. You must have spent years as a songwriter playing in rounds or on stages alone. How has that affected your approach to performing live?

Yeah it’s a really unique thing jumping kind of from the singer-songwriter type of atmosphere to the Thomas Rhett opening act stage. The band we are really meshing and gelling and getting it figured out how to keep it on an intimate level where people leave and go “I know that guy. That was a unique concert! He actually told stories behind the songs and talked!” which is, in my opinion, the best. We’re doing a great job of keeping the craft that I’ve honed doing writers round but also bringing the volume and the feel of the band.

You’re heading over here to the UK next year for the Country2Country festival. How excited are you to be bringing your show over?

I’m so thrilled! It’s such a genuinely new experience for me! I’m not a well travelled person and that’s just, not because of choice just opportunity in my life, I’m just excited about to go to a new culture and be around a new musical climate. I’ve heard that your fans are incredible and I can’t wait to meet them. I love music and it sounds like they love music in a similar fashion so I can’t wait to share my stories and say thanks to those who’ve already checked out my music.

Do you see touring over in the UK and Europe as a long term proposition for you?

Oh yeah! I’m going because I have intentions of sharing my stuff and building a fan base and a family more or less where I can continue to come and share unique experiences live. I’m sure that I’ll probably leave with a couple of song ideas too where I can say forever “I wrote this here!”. This is not a one time stop here – we’ll be back I’m sure after we experience it for the first time!

Check out our review of ‘boom.’ here 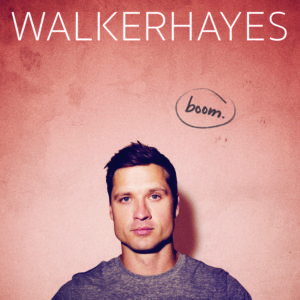