Big Machine Records has a habit of throwing out top quality artists. Carly Pearce is no exception to that rule. Having had her share of heartbreak both in her career and personal life 2017’s ‘Every Little Thing’ was

presented to listeners as an honest and personal reflection of her journey. We managed to chat to Carly to discuss the album release and her journey.

Carly, thanks for spending some time chatting with us today. How are things? It must have been a bit of a wild year for you?

Oh my, yeah! It’s been the most whirlwind year that I think I could have ever dreamt up in my head!

The debut album ‘Every Little Thing’ was released in October. How have you found the reaction to the album?

Way more than I could ever expect! I don’t think that you can plan to have a year like I’ve had!

It must be quite a nerve wracking thing releasing your first music to the world and thinking “I hope people like this!”?

Yeah it’s kind of like your heart and your soul and you hope that people are going to react to it. At the end of the day you have to stand for what you believe in and hope for the best. I definitely got lucky!

The record made it up to number four on the Country Chart. That must have been an unbelievable moment in such a vast genre to find out that you’d hit number four?

Oh my gosh yes! To have an album that resonated with people, I was nervous that it was just going to be a song and not really work when the full product came out. Just to embraced past ‘Every Little Thing’ is just so exciting and I’m really looking forward to what is to come in the new year.

You’re right as it is such a singles market these days. I’d imagine it’s a totally different thing putting out an album compared to a single?

Sure! I’ve seen so many of my peers and friends release a massive single and then they go to release a follow up song or the album and it doesn’t do nearly as well as the first single did. That’s the scary reality!

It’s such a tough market to break into now with country music being incredibly varied in style. Did you always have faith that you’d find your place?

Yeah I think what is so exciting about the state of country music is that there is so much and you hear everything from Thomas Rhett to Florida Georgia Line to Carrie Underwood to Kelsea to Maren to Midland to Me. I think that there are pockets of fans for each area of what we all do. For me it was not an option to not make country music that had a traditional throwback vibe to it and I’m so thankful that, in the time that I got my shot, there are people doing kind of what I do and there’s a place for it.

As a female in country music, it’s that often asked question now, do you feel that it’s that little bit harder to make it? Obviously now there are artists like yourself, Miranda, Carrie Underwood, Maren Morris and more who are maybe blasting those doors open. Do you think that there has been a change and women are becoming more accepted?

I definitely think they’ve helped to open the doors for girls. I think that slowly but surely you’re starting to see the next generation under Carrie and Miranda, people like Kelsea and Maren. Quite honestly with this song doing what it’s done for me then it’s going to help the next female that comes out so I think that if we can just make music that’s connecting special and we all do what we do and build each other up then you’re going to start to see a lot more female artists in the format.

I guess it helps that the females in the format are pretty badass too?!

Yeah! For sure! Even people like Kelsea and Maren who aren’t exactly pegged as the badass but are unapologetically singing what they believe in and aren’t changing anything for anyone – I think that’s pretty badass!

Interestingly, over here in the UK the likes of Maren, Kacey Musgraves and Brandy Clark have found great success and a big fan base perhaps because there aren’t as many preconceptions, maybe because country music isn’t ‘our music’, do you think the UK is somewhere that you want to head to?

I definitely do! I’ve heard from many of those women including those that you just mentioned that you guys appreciate songwriting and true artistry and at the end of the day I feel like I’m an artist that wants to tell my stories and dig deep and, from what I understand, that’s what you guys like! I’m so excited to get over there!

You were signed with Sony Music Nashville in 2012 that didn’t really come to fruition. How tough was it to keep faith that you’d make it after that?

Oh my gosh – so hard! In the moment I was a 22 year old who thought I knew everything but really knew nothing! I was very heartbroken over that and thought that it was over. There was something in me that knew it was my destiny to sing country music and knew that there was no way that I could have devoted my whole life to something like that and it not happen. It was the best thing that ever happened to me! Even ‘Every Little Thing’ the guy that broke my heart, I thought it was the worst thing, turns out it was the best!

I see that you recorded and toured with one of my favourite bands Josh Abbott Band in 2016. How big an impact do you think that had on your career?

I think that they gave me so many opportunities that so many new artists, I didn’t have a record deal or anything, I was getting sort of an inside peek into a radio tour, into chat shows, we played on national television. I was being exposed to things that you kind of have to figure out in the first year of your own career so the fact that they believed in what I did so much was so special. The first person that I ever played ‘Every Little Thing’ for was Josh Abbott on a flight and he was like “oh my gosh what is that!” I’m forever grateful to those guys for the opportunities that they gave me! He probably wouldn’t say this because he’s too good of a person but he paid for my band and I to travel when he shouldn’t have but he just wanted me to be there – I’m forever grateful!

You’re now with Big Machine Records. Did that all happen off the back of that tour?

It came the second that I put ‘Every Little Thing’ out on satellite radio and the head of A&R, her name is Alison Jones, sent me a direct message on Instagram and said “hi, it’s Alison. You have to call me in the morning.” I think what is so special about them is, I had a lot of offers come in after the song was selling, they came in and Scott and Alison came to see me the night after the song came out at the Opry. They really believe in me before the song was even doing anything. Actually I was negotiating my record deal this time last year! I signed the deal in January 2017!

We often hear artists singing the praises of Big Machine when they’re on that label. How important have you found them in developing you?

I am on the best label in the world! I mean that – it is a family and we all support and love each other. I think Scott is so incredible to pick artists that he knows are workers and visionaries and he allows us to create our identities and our place in the format. Midland and I, look at the year that they’ve had with two new artists, they listen to their artists and help them shine. I’m so grateful to be at that label!

Just going back to the album. You have co-writes on most of the songs on the record and that’s common with a lot of artists on Big Machine. Do you think that helps to make a much more personal record?

I think so. I really think that if you’re going to have a voice then you’re going to have to write your songs. For me I grew up loving the late 90’s and early 2000’s women and they built careers on songs that they didn’t write and ‘the best song wins’. For me, there were five outside songs that I felt told areas of my story that I didn’t quite nail and I felt like I needed those songs. It’s only because I resonated so much with them that I felt that they needed to be a part of it.

I guess it’s the same as a listener where you can hear a song and think “wow that could be written about me”?

That’s a great point! I think that it would be a bummer not to use some of the unbelievable songwriters that we have in Nashville. I believe in what they do and I was so lucky to get some of the songs that I did.

Well it’s a record that really did resonate with us so hopefully we’ll get to see you over here soon and you’ll surely be welcomed with open arms!

I’m coming I promise! I’ve never been and I want to come! Hold me to it!

Check out our review of ‘Every Little Thing’ here. 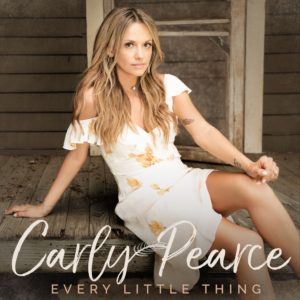