One of the wonderful things about country music is that every year sees a whole host of exciting new acts coming through. Lanco have been cutting their teeth out on the road with the likes of Chris Young and Brothers Osborne in the last 18 months and January saw their debut album ‘Hallelujah Nights’ hit the shelves. The Jay Joyce-produced project hit the number one spot in the Billboard Country Chart. We managed to get some time to chat to guitarist Eric Steedly about their fantastic rise! 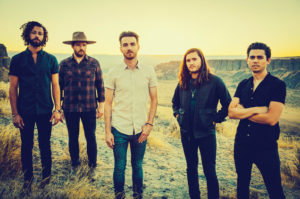 I guess the first thing that we should talk about is the fact that the album, ‘Hallelujah Nights’ went straight in at number one on the Billboard Country Chart?

Oh man! It is incredible! It’s kind of hard to describe, you have your head down for so long, working hard to make all of this a success and then all of a sudden you turn around with a number one album! It’s like “oh my gosh!” You know, I don’t know if I ever believed that it would happen, it just does. It’s really a dream come true for us. It’s crazy!

I’d imagine so! You’re record breakers as well, you’re the first band since Lady Antebellum to come straight in with a number one on their debut!

Oh yes! That’s another part of it, to get a number one album is one thing but to get that sort of accolade just makes you ask how did this all happen! We were a garage band a year ago and here we are.

The single ‘Greatest Love Story’ was a big success but did you ever believe that the album could match up? Obviously, singles are a big part of the business now and albums can be difficult to make a mark with.

Totally. That’s the thing. It’s something that you talk about in your strategy. We were just elated when ‘Greatest Love Story’ did well, I mean, we love all of our music but we do realise that you need that help from a breakout single to expose you to a bigger audience. Then you do hope that you’ve built a fan base along the way that wants to invest in your music, I think that’s somewhere that we were fortunate. We built a fan base that really bought into us over the past couple of years and so, when we were finally ready to release all of our music, they were excited to hear it. We love albums too, it’s an important thing to us and we really did want this body of work that represented us. It’s really affirming to sell that well and have people believe in what we’re doing.

It’s interesting that you say that, here in Britain we do have somewhat an album culture, we buy an album and listen to it from track one to the end. I think the album that you released has all of those ups and downs, which I’m sure is part of the reason it was so successful.

Absolutely. Some of it got mixed down but there were sections on the album with 16 minutes of music without a break because we had transitions and things, we’re obviously millennial guys and have everything from Alan Jackson to Jay Z to Fleetwood Mac on our iPhones. A lot of us grew up with those older rock acts and things from those great album eras. Our producer, Jay Joyce, is obviously a very creative and kind of left-of-centre guy for country so he was all about making this a cohesive album. It all really worked out!

I was going to ask about Jay Joyce actually, it must have been amazing to get to work with him on your debut record?

Oh man, I can’t even describe it. There have been so many moments where I’ve been picking my jaw up off the floor and early on that was one of them. We met him before we had anything, Brandon just ran into him on a whim and we played for him, he was like “Ok, I get it. Let’s make a record”. At that moment, I think we were fans of him and he would be our dream producer! We literally made jokes early on about how cool it’d be to have Jay Joyce produce our record! Then three months later we’re in his world-class studio and he’s in your face just “play that guitar part differently!” It’s just surreal and so crazy!

You’ve also recently announced as well that, along with Brothers Osborne, you’ll be hitting the road with Dierks Bentley. That’s a huge tour to get on! That must be another pinch yourself moment?

Absolutely! For multiple reasons, Dierks is an incredible artist who has had an incredible career, which is still going up, and the Brothers are right there as well. They have some really cool things going on. It’s also special for us because we’ve been able to make good relationships with them. We were on the Brothers Osborne’s first headline tour, so to us it’s kind of like our dream tour! It’s not only a great line-up of music but it’ll be like a family backstage!

I have to say Brothers Osborne are the nicest guys and the easiest to get along with!

Oh man and they can drink! They’re both, like, six foot four so they can down a lot! They are the best! They picked us up early on when we used to travel in a little crappy RV and at a festival they came and hung out with us on there before they asked us to go on their tour a few months later. I think they felt like we got along well, they’re really good dudes and gosh they can make music!

It’s interesting talking about that tour and you’ve been on tour with Chris Young as well. How much do you learn whilst you’re out on the road with these artists?

We learn a massive amount, that’s one of the things that we strive to do. Eery band or artist that we play with, you can always find us side-stage watching the show. Whether it’s a band like Brothers Osborne or an artist like Chris, there is always something to learn, it could be how the band grooves together or how to take control of 10,000 people. Also, watching how they treat people behind-the-scenes. There’s a lot to learn!

Speaking of the live shows. How would you describe a typical Lanco live show?

It’s a blast! We bring a lot of energy and I think that’s something that we found early on. We were born and bred playing in bars to a bartender and people eating cheese sticks so we had to get their attention! Brandon is very energetic, he’s like a jumping bean all over the stage and he’ll get out in the crowd. We’ve always dreamed of playing arenas one day and we’ve built our sound around that. It’s a fun place to be and we always try to get involved. We learned a lot from the alternative world, we’re all fans of that. It’s an exciting experience!

Have you got a favourite tune to perform live?

It’s hard to say because they’re all your babies. I’ve been enjoying ‘Troublemaker’ live. It’s a really sassy song and we really amp it up live. If it’s our show and we have the time, we’ve actually started doing this improv jam to that! It’s really fun for me as a guitar player!

The most exciting thing for us over in the UK is that we’ll be seeing you over here at C2C! How excited are you to come over for some shows?

Oh man! We’re elated! I don’t think any of us have even ben to Europe! We all love to travel and see different cultures and that is a place that you dream of going. To get to go there and also share your music with a totally different world is so exciting, it’s hard to process!

The album is getting a bit of a buzz too over here. How aware are you of the country scene that we have over here?

Well, I’d say we’ve learned from other acts in the last year how awesome and engaging and excited the crowds are. I’ll be honest, two years ago I’d have probably assumed that there was no country scene over there! I don’t know why, that’s just probably naïve but you just assume that it’s geographic! It’s awesome and so encouraging knowing that there are places that you can go outside of the States, not only to play a show but to connect with people. It’s amazing!

Are you likely to add the UK as a regular touring spot in the future?

Oh absolutely! I think we would all be chomping at the bit to come over and tour! I’d say that, the minute we can do it, we’d be over in a heartbeat! Like I say, we love travelling too so any chance to come over we’ll take it! We’re really excited!

‘Hallelujah Nights’ is available now. Check out our review here. 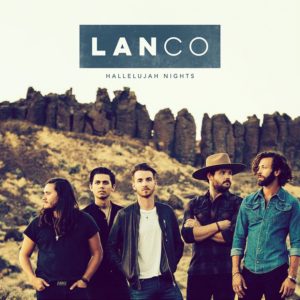