There’s no doubt that the women of country music are kicking some serious ass at the moment! The likes of Miranda Lambert and Carrie Underwood still fly the flag whilst Maren Morris and Kacey Musgraves, amongst 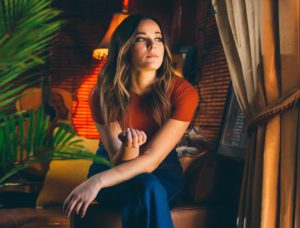 others, are becoming the new superstars. Jillian Jacqueline is a name that is frequently being added to that list of stellar songwriting and performing females. Her EP ‘A Side’ was released last year and she’s back over in the UK for C2C in March before supporting slots on several big tours in the States. We caught up with her at the start of the years after she’d made her debut on Late Night with Seth Myers.

It must be quite an exciting time, I hear that you made your late night TV debut last night! How was that?

Oh my gosh! I’m still on cloud nine for sure! It was so exciting. Lots of good nerves because it was my first late night television performance but it was amazing. My whole family was in New York so they all got to come and hang out backstage and see it all. It just made it really special and Seth Myers was amazing. It was as good as it could have gone and I’m very happy with how it went!

It must have been nerve-wracking performing infront of the entire nation as well?

Yeah, it was a little bit intimidating but I tried not to think about that. The good thing is that when you’re in those studios it’s just a small audience so I tried to imagine that I was just playing for that little crowd as opposed to millions of people watching television! The good thing is that, after the performance, they let us go downstairs and listen to the mix to make sure that we were happy with it. If something had gone horribly wrong they probably would have let us do it again! My goal was just to not fall on my face or forget the words!

You recently released your EP ‘Side A’. How have you found the reaction to that?

Yeah I released it in October, so it’s been out for a few months. The reaction has been overwhelmingly positive for me. I feel incredibly lucky to be able to put music out without going to radio first and be able to reach people as organically as possible. The cool thing is, right after I signed my record deal, I recorded my full album and that’s been done about a year now so we get to choose exactly how we want to release the music. This first is a very good indicator of what’s the come. I’ve enjoyed giving people time to live with this songs and I’m looking forward to putting out the rest of the album this year. I’m excited!

I think that’s a really interesting way to do it. You’ve been building your career for a few years now, it must be exciting to get the music out there?

Yeah! It’s definitely not an overnight success. I’ve technically been doing it since I was nine! It’s amazing how much I’ve learned and it’s been a long road with a lot of twists and turns that I didn’t expect but it kind of makes me appreciate things a hundred times more because I’ve had a lot of time to figure out what my music is all about and I actually appreciate all of the years that felt like blood, sweat and tears and all of the random odd jobs. It makes it feel very fruitful to be here and very confident in what I do. Luckily Nashville is such a great starting point because you already have this community of artists who understand what you’re going through and it’s like a big family.

I saw that you’d worked with the likes of Lori McKenna and Trent Dabbs. They must be great to learn from?

Yeah. It’s always been an honour to write with people who are heroes of mine. I’ve been a fan of Lori for many years and to have her as part of my record is pretty surreal! I look up to her so much and really admire her incredible wise and unique vision. She’s just one of those songwriters who nobody else can do what she does and she does it so humbly! There are so many that I could name like Sarah Buxton and Shane McAnally who I could name! I want to gain respect for what I do and having the respect of my peers means a lot to me!

Tell me a bit about some of the songs on the record. How would you say that you approached writing them?

They’re all very personal. It’s funny, when I was younger I was when I was trying to write I was trying to steer the songs away from love and relationships and now I feel like, ironically, what a lot of people have heard from me is extremely raw because I happened to go through a horrible break-up before I signed my record deal. It wasn’t by choice that the songs came out extremely vulnerable but it was almost a blessing in disguise, people are hearing that! I think that’s probably why I connect with the sad songs with other people as you want them to feel a little bit less alone. You might be a little bit ashamed of how things fell apart but it’s one of the best things to do to let your guard down.

The song ‘Reasons’ actually got a lot of traction early on and had over two million streams on Spotify. Were you quite surprised with how people connected to the song?

I was because I wasn’t expecting it to be so widely received across the pop genre as well. I was just surprised that it was speaking to a wide audience. We were very pleasantly surprised with the results. People keep finding it and it continues to grow. It’s what you hope for but you never expect it!

It looks like a busy year ahead for you as well, I see that you’re joining up with both Thomas Rhett and Brett Eldredge on their tours. That must be exciting?

I’m so exciting! That’s exactly what I was hoping that this year would be. It’s the coolest thing to get out there and get to play across the US and now the UK and have people know the words to the songs. It’s all about getting to play the songs live for me.

Obviously you’ll be in the UK for C2C this year. How excited are you to head over to the UK and play some music?

Well my first time was such a blast and I was so blown away by the people and their love for country music. It was just so much fun and everyone was extremely receptive. I’m pretty excited! I’m not looking forward to anything more than C2C at the moment!

The final thing that I was going to ask is that Kacey Musgraves headlines one of the nights at the festival. A lot of comparisons have been drawn between the two of you. With her and the likes of Maren Morris, do you think that women in country are starting to get that respect?

Yeah. I think that conversation has come up a lot and it’s more so just a good time to be a woman who knows what she wants to say. All I can say is that I’m really happy to be in a place where I have a really clear vision as an artist so, yeah, I think Maren and Kacey are incredible and I’m thankful that people are drawing that comparison.