Knoxville-born and Alabama-raised Ryan Kinder may not be a name that many readers are familiar with yet but, with over 39 million 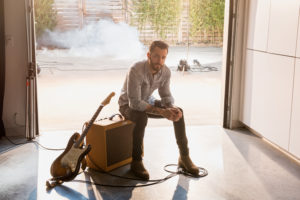 streams, this could be set to change! Kinder hasn’t yet released an album but is receiving critical acclaim to add to his digital domination of the airwaves!

Ryan Kinder is a voice to watch in the country music genre. He’s currently signed to Warner Music Nashville and has shared the stage with some huge acts. He knows his way around a guitar and is a self-confessed Keith Urban fan. He’s been racking up the miles on tour with the likes of Brandy Clark and Zac Brown Band, not bad for a couple of mentors!

He is currently working on his Warner Music Nashville debut album which we can expect (hopefully!) in the near future. Kinder is co-producing and writing the record alongside his long-time writing partner Luke Sheets. His song ‘Close’ was a huge viral hit in 2017 and has been followed up by ‘Still Believe in Crazy Love’. It looks like we’ll be hearing a lot more from him too!

He’s been on the radar for a while and in 2015 Rolling Stone rated him as one of ’10 New Country Artists You Need To Know’. In that article they referred to him as ‘Lady Antebellum’s smooth pop-country topped with John Mayer’s raspy vocal style and a dollop of a drawl’. We wouldn’t disagree with this! The balance of soul and rock in his music, coupled with skilled songwriting means that Ryan Kinder has a lot to offer! Also, check out his cover of Creedence Clearwater Revival’s ‘Fortunate Son‘

He’s been working on his debut album so hopefully that should be seeing a release soon! He’s been on the road out in the States for some time and heads over to the UK in 2018. He’ll be playing at the Country 2 Country festival in London before heading out on some shows with Ashley Campbell and Mo Pitney (dates below). Hopefully it’ll be the start of a long relationship with the UK!