It’s been five years since Scotty McCreery last released a full length album. The one-time American Idol winner’s last album See You Tonight peaked at number one on the Billboard Country chart in 2013. The last five years have seen a tremendous amount of change for the North Carolina born singer, a change in record label and management as well as the book ‘Go Big or Go Home’. 2018 see’s McCreery revitalised and he already has a number one single under his belt with Five More Minutes. The track features on this latest album, Seasons Change. 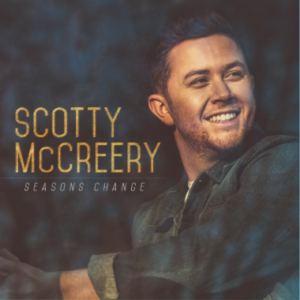 The album opens up with the title track. It’s an unmistakably country sound with banjo and guitars driving the tune along, it sounds quite similar to something that fellow Carolinian Darius Rucker might produce. The lyrics seem to reflect on the last few years as McCreery sings “it’s been a long time coming” and “sometimes going through all the bad weather makes the sunshine that much better”. It’s a positive statement on his return and a very catchy song.

Wherever You Are follows up and McCreery’s baritone vocal takes centre stage in this ode to always being there with a love. It’s a really great upbeat and catchy country song with a typically big chorus. The country world seems to have shifted away from this type of song in recent years and it’s great to hear Scotty McCreery bring it back.

Next up is Boys From Back Home, which is another uptempo rocker. It’s a somewhat autobiographical story about small-town life in the USA and has that big anthemic feel to it.

The number one single Five More Minutes is one that could have the hairs on the back of your neck stand up. It’s a huge and emotionally charged ballad about wishing for five more minutes to enjoy the people and things that we love in life. It’s a hugely relatable song that reminds you to make the most of life. It’s truly deserving of being a number one single and quite a refreshing return to the type of country that we were hearing a few years ago.

In Between kicks off with the banjo in true country style. It’s a driving ballad that has that big anthemic arena filling sound that we’ve seen on previous album tracks. Lyrically it seems to be about the balance between being a country and a city boy, a worker and a drinker and so on.

Track six is This Is It. It’s a song that slows things down a little after the breakneck start to the record. It’s a lyrically sweet song about the perfect moment in the perfect place to propose to a love. Scotty actually popped the question last year, near Grandfather Mountain in North Carolina so it’s most likely an autobiographical song.

Wrong Again picks things back up. This funky number gets your foot tapping as Scotty sings about thinking that he’s going to have a quick romance but ending up spending a lifetime with someone. It just goes to show that we don’t always know what is going to happen in life, even if we think that we do.

Next up is Move It On Out which is quite a standard modern country song about packing up for the weekend and heading out to the beach for some drinking and some fun. It’s a good fun summer song that doesn’t quite hit the meaningful level of some of those before it on the album but does give a welcome fun break.

The next track is a fantastically fun and sexy song. Barefootin’ continues the theme of hanging out on the beach, this time getting a little naughty with a girl. It’s got a brass section which add a really great vibe to this soulful country song. My only question would be does he really sing “shagging in the sand” or am I mishearing this?! As an Englishman this use of the word is just great but always makes me laugh!

The penultimate song on the album is Still which is a tune that slows things down a little again. It’s another love song about how you can spend the rest of your life laughing and crying with someone and will always need them. The refrain of “oh my god, you are my whole world” is brimming with passion. Really great song.

Home In My Mind rounds out the album fantastically. It’s a superb country ballad with a big chorus. Scotty is clearly very much a down-home country boy and this story of being out on the road and missing his love and home comforts proves that. There’s some beautiful pedal steel weaving through the song. It’s an emotionally charged end to the album that closes things of perfectly.

This really is a triumphant return from Scotty McCreery after five years away. The songs are well crafted and hark back to the type of emotionally fuelled country that the likes of Darius Rucker and even Chris Young were producing a few years ago. It seems that the time away has seen McCreery change and mature a lot, he’s only now 24 years old! This record could well spring McCreery forward into the next phase of his career and, considering the fact that he co-wrote every song on the record, should make him much more than just an American Idol winner in peoples minds. It won’t be everyone’s cup of tea but it’s an album lovers album, with great songs from start to finish.