The C2C Festival has become a fantastic springboard for artists who are looking to make a move into the U.K scene. There have been countless performances over the years from the likes of Drake White to Maren Morris, all of which have placed them firmly in the hearts of the British country music-loving crowds. This year at Country2Country was no different and the quality of artists around the festival just gets better and better! We’ve picked our top five picks that really made an impression at 2018’s festival! 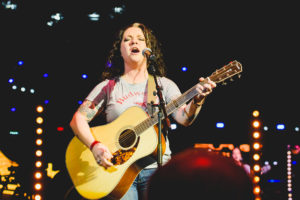 Songwriter Ashley McBryde was impossible to ignore over the weekend at C2C. Her superb musicianship and fantastic performances were the talk of the O2 and endeared her to a whole mass of new fans. Ashley is that perfect example of an artist who could find more of a home in front of the attentive and lyric-focused British country crowds. Social media was buzzing with talk of her performances and we can’t wait to see her back in the U.K soon!

It’s been a whirlwind year for Midland who released their debut album On The Rocks last year and received a Grammy nomination for their number one single Drinkin’ Problem. The band were on the main stage at the festival and opened up Sunday in London with a rollicking set. From the opener Check Cashin’ Country the crowd was hooked on their Eagles-esque melodies and retro sound. Midland without doubt win the award for best dressed at C2C! They’ll be back in the U.K for a full headline tour in November/December. We interviewed the band after they’d played the festival which you can read here soon.

From the second the lights went down in the main arena and Lindsay Ell started playing on the Spotlight Stage, she was every inch the guitar goddess. Lindsay popped up all over the festival on numerous stages over the weekend and brought with her a fantastic high-energy performance and some killer guitar skills. With a style that lands anywhere between John Mayer, Sheryl Crow and modern country-pop, Ell wowed the crowds and certainly took home some new fans. Her debut album ‘The Project’ was released in the UK on the Friday of the festival and it’s well worth checking out for some soulful country and blues. 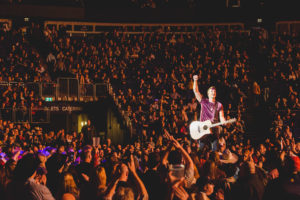 Since he appeared at London’s Canary Wharf Nashville Meets London festival last year, Russell Dickerson has released his debut album ‘Yours’ and seen his stock continue to rise in the States. On the evidence of his high-energy Spotlight Stage performance this is well deserved. He rocked the O2 Arena with the songs ‘Every Little Thing’ and the beautiful love song ‘Yours’, giving himself a very solid footing for a return to the U.K soon. Also, on a side note, I was chatting to his wife and mistook her for Jillian Jacqueline… dead ringer! 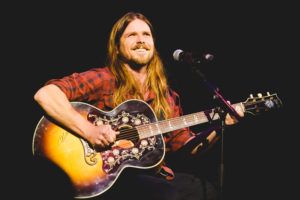 When this guy sings… wow. When this guy plays guitar… wow. He may be the son of legendary artist Willie Nelson but Lukas is an absolute star in his own right. His set at the Saturday night after-show party was an absolute revelation for many people with his mix of heavy rock guitars and country storytelling. The real highlight was his performance during Margo Price’s main stage set. When he started singing on ‘Learning To Lose’ there was a widespread goosebumps epidemic across the O2. He’ll be back in London in the Summer for a show at The Garage.

As always, Country2Country Festival offered the crowds a whole range of superb artists and it’d be impossible to mention them all here. It’s amazing to think that just five years ago it’d probably be unheard of to see so many country artists playing in London but this is the gift that C2C, the CMA and all of the organisers have given us!

It’s highly likely that a lot of the names on this list will be back soon and it can’t come soon enough for us!