It seems crazy to think that it’s about 18 months since Midland released their debut EP, a five-song selection that introduced the world to the ‘Gator Boys’. Since then they’ve had a number one album and received CMA and Grammy nominations. This year saw them on the bill at the Country2Country festival in London, Glasgow

and Dublin, wowing crowds with their high energy 70’s throwback sound. We were absolutely thrilled when we were asked to sit down with Mark Wystrach (lead singer), Cameron Duddy (bass) and Jess Carson (guitar) for a chat at Universal Records in London the day after their debut London show.

How has your first European tour been?

Cam: Yeah, it’s been cool. The UK has been a great place to play country music consequently so…

Did that kind of surprise you?

Cam: Yeah. We heard that y’all really enjoy country music but we weren’t sure if anyone was going to know who we were.

Mark: I guess London is just a central place but it does also feel kind of strange to play country music in such a cosmopolitan area. I mean, the centre of British culture, you know?

And the response you got at the show last night was great!

Mark: It was so cool. We just kind of stay in the dark, expectation is the worst of all travelling companions, right? You don’t want to know in a way and so we were genuinely shocked. We walked on stage and looked at each other and said “holy shit!” because we didn’t actually sound check! That was actually the first time that we’d walked out on the stage which made it an even more compelling moment!

So you just kind of arrived and that was it…

Over the last year you guys have kind of rocketed, could you have imagined walking out on the O2 Arena stage two years ago?

Cam: It’s not part of what you imagine! You imagine maybe getting ten or fifteen people to show up to your gig. That’s what you hope for!

Interestingly, before you even struck a chord in the U.K you announced a full tour for later this year…

Cam: We saw the reaction in further points north from here last week and people were digging the music at shows so we just thought “let’s give it a go” and come back.

It’s great! I live up in the north of England so you’ll be coming close to me!

Cam: Oh yeah! We’re heading to some awesome places so that’s going to be a lot of fun.

Yeah, it is hitting some of those smaller towns too that a lot of acts don’t go through which is cool.

Mark: Yeah, we’re playing Shepherds Bush too and we were being educated on some of the history last night.

Shepherds Bush seems to be a big stop for country acts over here. Zac Brown, Rascal Flatts, Little Big Town have all been through.

Mark: Little Big Town were telling us last night about it!

Cam: Philip said that it was their biggest one.

Jess: They did our slot at C2C one of the first years and then they followed it up with a sold out show there which is kind of funny.

Cam: He said it was one of the biggest ‘holy shit’ moments of his life!

All over social media people seem to be demanding you guys here and to get to their town. That must be a cool feeling?

Cam: It’d be cool if people followed us around!

Obviously ‘On The Rocks’ came out last year, and you talk about not setting expectations for things, but how far beyond your wildest dreams was the reception to that record?

Mark: I think the three of us…

Mark: Haha yeah! I think the three of us, when that album was mixed and mastered, sat back and said “this is the best thing that any of us have ever been a part of creatively”. We just felt immensely proud of it and, for me personally, I’ve never created something that I’ve wanted to stand behind and say “this is me! I’ve been part of this!”

Jess: I made a popsicle stick castle in second grade… I admit that was better!

You did your best with ‘On The Rocks’, Jess. You can’t beat everything!

Mark: The reaction is not something that we spent a lot of time thinking about because you just can’t. The three of us try to live in the moment and take it as it comes.

I know you guys cut your teeth out in Texas…

Mark: You heard about that? I bit right into the fork, cut myself good!

Nearly ended your career I heard… but not too many bands move out of that scene. It’s quite insular really, isn’t it?

Jess: You can be comfortable in Texas. I guess we made a conscious decision not to be comfortable! If you live in Austin you can go on runs up to Dallas, San Antonio, Houston, El Paso and go back and make good mood. You can have a great audience in Texas because it’s huge. As much as we are a Texas-centric band and love Texas, we also wanted to reach audiences beyond.

I think that you guys have a sound that can. I was with a friend last night who hadn’t heard you before, he must be an idiot…

Cam: Yeah, who is this prick!

Mark: (in an English accent) A bit of a twat! 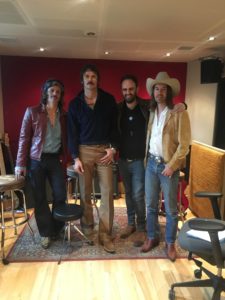 Haha! When you guys starting playing though one of the first things that he said was “the Eagles”!

Yeah he actually said “I wish I was listening to the Eagles right now instead!”

Jess: Did he mean the football team?

Cam: Tell him thank you because that is so cool.

Cam: I don’t even know what to say about that but we can’t even put ourselves in the same box!

I know it’s not long since the album came out but are you thinking about new music yet? Will you be pumping it out quite regularly?

Jess: Oh yeah, for sure.

Mark: At least for a while yeah, until we all have mental breakdowns and have to go to rehab.

We could see a Midland psychedelia album!

Mark: Yeah, we’re working on releasing an album in 2018 so we’re in the midst of writing. We have a large catalogue of songs that didn’t make the first album and we really love. We’re really excited to get back into the studio, it’s definitely a happy place for us.

It must be nice to be in one place for more than five minutes!

Mark: Yeah, working with our producers, Dan Huff, Shane McAnally and Josh Osborne, they’re people that we always enjoy being around and working with. It’s always a very fulfilling experience and we walk away feeling like we’ve grown as artists.

Dan Huff as well, I’m a guitarist and I love that guy! It must have been insane working with him?

Jess: He played on the album. We were like “why don’t you try and solo on ‘This Old Heart’ and he’d do this four or five guitar harmonised solo that is impossible to recreate!

That must be the tough thing, he’ll play a solo and you must think “great, we’ve got to take this out on the road now!”

Jess: Yeah we were thinking that.

To be fair, your lead guitarist is some player!

Cam: You know what? He get’s Dan Huff’s stamp of approval too which meant a lot to Luke. Luke’s a monster! Before this band is over I think we’ll probably end up adding another guitar player just to keep up with Dan Huff’s guitar!

I was going to say that you guys keep quite a tight little band on stage, just you three, Luke on guitar and drums…

Cam: It’s nice to do it like that because at least then you know that you can play if you get peoples attention like that. It would be nice to grow it out like that.

Cam: Haggis. We had a hell of a time with this crazy lunatic called Scott in Scotland.

Mark: Scott, if you’re listening, Scott is a great example of second chances and redemption! He was clearly a hellraiser, man. A classic Glasgow guy made good. I think in general we’ve met some really good people, same in Dublin.

Cam: I had a great breakfast this morning! I had an English breakfast, it was the shit!

Did you have black pudding? It’s basically pigs blood in a sausage.

Cam: I like that you guys put beans in with it. We’re from California so we’re big fans of beans.

Mark: This is a bit of a pet peeve of mine and I’d like to directly address the British people about soft boiled eggs. What the fuck?!

Really? We have eggs and soldiers. Make your toast, cut it into strips and dip it into the egg. It’s great!

Cam: I’ve never had a soft boiled egg so I can’t comment.

Mark: Listen, if you’re hungover and you want to upheave everything that you drank then just crack open a soft boiled egg.

Cam: Dude, have you tried housing down the traditional English breakfast? It’s impossible!

Cam: Fuck, I love it! The orange juice was only pulp!

Mark: “Only pulp!” You sound British. Our accents have already changed in eight days. We’ve probably squeezed in a months worth of activity in eight days. We’re going to be delirious and carrying back some amazing memories.

It’s absolutely awesome that you came over so quickly after releasing the album!

Mark: We were desperate to come over, man! We love to travel and that’s part of the coolest thing of being a musician. If it’s hitting then we want to go and see. We’re dying to get to Australia and France and keep exploring.

Well we can’t wait to have you back!

Thanks, my friends all got it for my 30th birthday. It’s a bit of a joke at times in England still that if you listen to country music it’s like “oh you think you’re some fucking cowboy!” but the joke is on them because it’s awesome!

Mark: It’s funny that the western style is having such a moment in high fashion right now.

Jess: Are there cowboys in England?

We have a lot of farmers…

The difference is that you have cool cowboys and we have fat old farmers in tractors!

Cam: But they were the originals, right?

Mark: The cowboy style came from the standards originally. The boots all come from the Spaniards.

We don’t get enough sun to need cowboy hats either…

Mark: Yeah, it was built out of necessity.

Midland head back for a full U.K tour in November/December. Tickets are available here. 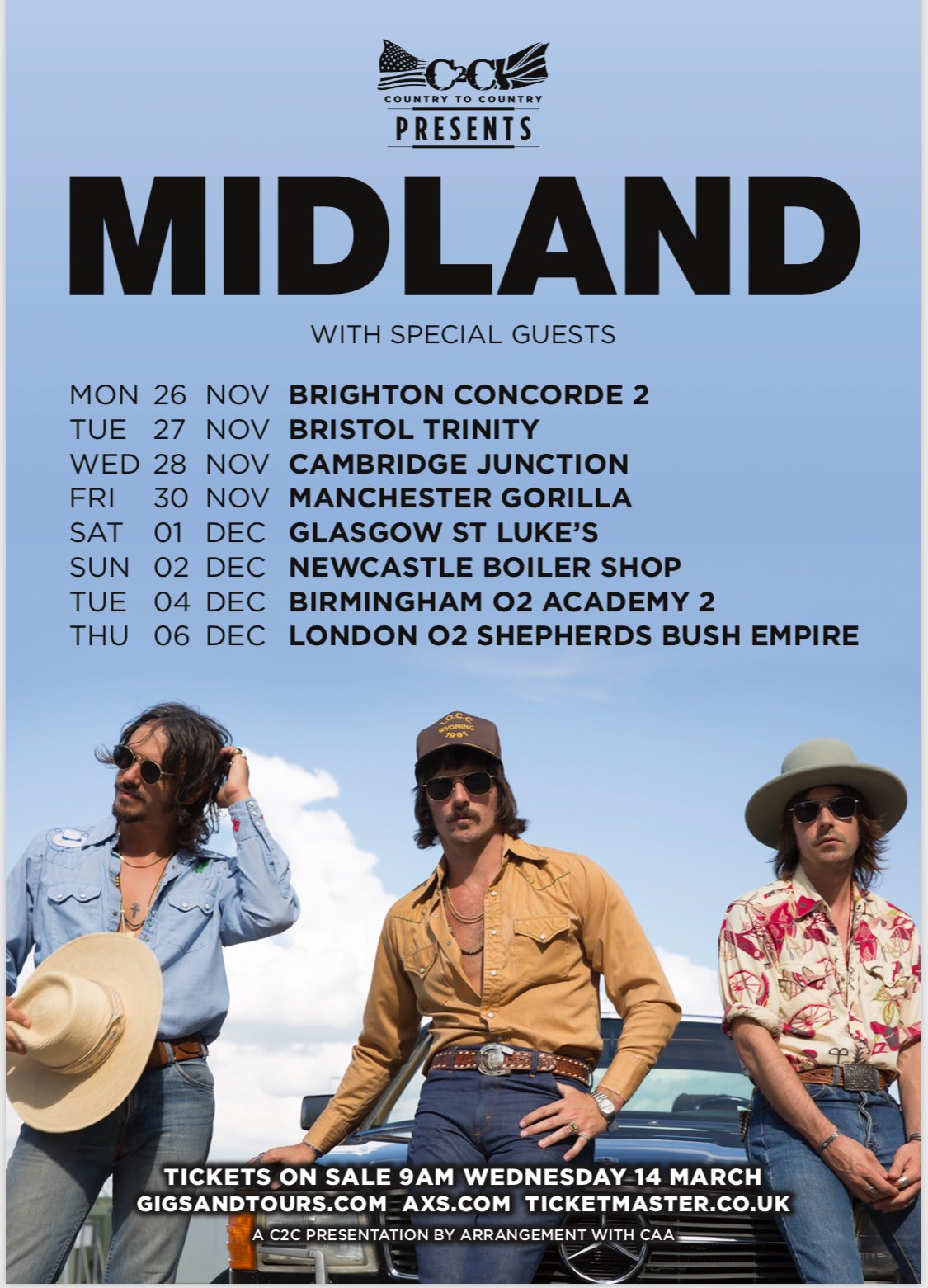