When she released her latest album I Don’t Believe We’ve Met last year, it had been five years since her debut album. Known in the USA for being a winner of The Voice, Danielle Bradbery had returned every bit the well-rounded artist, with a record to back that up. This year saw her make her debut in the UK at the Country2Country festival. We were lucky enough to interview her in London the day after the festival closed. 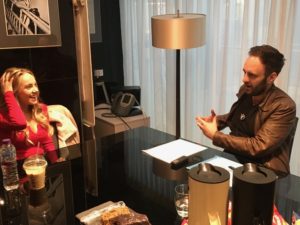 It must have been a wild weekend at C2C! How excited have you been to be playing shows over in the UK?

It’s been so exciting! Honestly, a breath of fresh air just to see new fans! Fans that I’ve only gotten to see on social media and now that I’m finally getting to meet them! It’s honestly, in the best way possible, kind of starting over in my music career because I’ve never been here before, this is my first time in the UK ever. Seeing them and their reactions on songs, singing every word, I’m like “this is mind blowing!” I love it so much!

Has it always been something that you wanted to do, to come over and play shows in the UK and Europe?

Yes, for sure! I haven’t travelled much, even growing up, the only far away place that I’ve been to is Japan and other than that I’ve never been anywhere else so this is definitely a moment to look around and see everything. It’s so much fun!

You mentioned before that the crowds knew all of the words to your songs. Did you have any expectation that it would be like that?

My mind set was definitely “I don’t know how this is going to go, if they’ll know my stuff or if they’ll even know me”! I saw some fans that were excited and thought “ok, this is off to a good start!” but since the first show and everything in between it’s been so incredible! Hearing them sing the songs again and how they pay attention, it’s like, I’m being spoiled right now!

It’s interesting that you say that, a lot of acts from the States mention that there are those quiet times as fans are listening to the words. Is that a bit nerve-wracking when you’re up on stage?

It is! All of us artists, I might be speak for everyone else, that’s kind of nerve-wracking for us back home! You wonder if they’re having fun, you never know when they are quiet but coming here, we’ve all talked about it amongst ourselves like “were they like that for you? This is crazy!”. We were like that at first but actually they’re really listening to every word you sing and admiring what you do. It’s incredible. 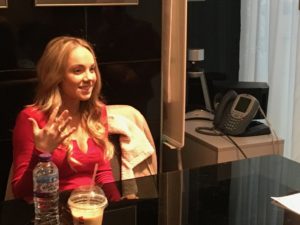 Do you think it might be something that you’re hooked on now and you’ll be getting back to the UK soon?

Yeah! It’s inspiring a lot of ideas about touring and coming back for vacation, anything!

Going to C2C in general, did you ever expect to find such a huge crowd of country fans in England?

I honestly didn’t expect it! I really wasn’t sure what I was going to walk into. I didn’t have any idea, it was always inbetween and I needed to see it myself in person. It’s been really cool to see such a big turnout! When I walked over to the O2, everyone was there, it was the place to be! Cowboy hats on, I love it!

Moving on to your music, the album came out last year. How did you find the reception to that?

What inspired this last album was a lot of songwriting. I got into it in the time that I really wasn’t putting much out, I was just focusing on a lot of things and songwriting definitely helped me figure out a lot. I thought “ok, I think I have it now”, there’s a lot of honesty in this album and a lot of it is actually real stories of things that I was going through and a lot of it was things that other people were going through. I wanted to make this specific album as honest as I possibly can and make that be the trend in this album. I think that worked, it’s a very emotional album!

There’s got to be something scary about putting your emotions out to the world like that?

Oh yeah! People say like “you say you’re a shy girl but you’re telling everyone your secrets!” I guess that’s true! It’s a special feeling when you do sing something so raw and vulnerable and you get to talk to fans about it actually helping them through a moment in their life. That’s so inspiring for an artist to hear! You’re basically telling them that they’re not the only one going through something. It is very nerve wracking, when I sing Human Diary, I wonder if it’s too much but it turns out well in the end!

I guess in the UK, for someone like you with such songs in your repertoire, we have a strong songwriting culture over here. Do you think that’s something that translates well with the British crowds?

Yes. That’s something that I noticed, just being honest and a lot of the storytelling part of the song, I see that they’re naturally a listening crowd. It fits perfectly.

I was going to ask about you winning The Voice in the States. Do people still know you as the winner of The Voice over there or have you carved out your own identity? Over here nobody really knows that! Is it different?

I think the nature of the record and the personal nature must help. Someone who just won The Voice can’t make the record, you have to be something more…

Yeah and people have that view of people who win The Voice. They’re like “oh, just another TV winner” but once you sit down after all the craziness you get to figure out that you’re more than that. I write my own stuff and I’m really getting to find who I am in my music instead of singing covers. It’s a big difference and really cool to see. 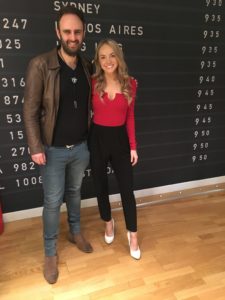 There were four years between your debut now. What were you doing in that time? Do you think age and experience wise that was the time that you became an artist?

Yeah it definitely was. I was quite for what feels like forever. A lot of my fans were asking when stuff was coming out but it was definitely the time to lay it all out on the table with my management girls and my label and just really be like “ok, put it on the big screen, who is Danielle Bradbury as the artist and not The Voice winner?” I was really young through the show and had to really grow up, I was just going through life and needed to figure a lot of stuff out. On the show I was that awkward young girl, at those ages 16, 17, 18 I don’t think you’ve figured out much!

My awkward years were on TV, I’m like “That’s great!” Yeah, that time was definitely the time to figure out who I wanted to be, so it was much needed.

Final thing that I’ll ask, I always like to ask American acts this, what has been your favourite thing about being in the UK?

I think it is the crowd! Just seeing the crowd and experiencing it all over again, it’s been really cool!