There is little doubt that Ashley McBryde became one of the names on everyone’s lips at Country2Country 2018 in London. Her powerful voice and honest songwriting landed her a place firmly in the hearts of the British fans. It’s not just in the UK where her reputation is growing, Ashley is currently on a huge run of shows in the States and releases her debut album Girl Going Nowhere this week. She’s been on runs with the likes of Chris Stapleton, Eric Church and Miranda Lambert too, so there’s no doubt that she’s got the seal of approval! 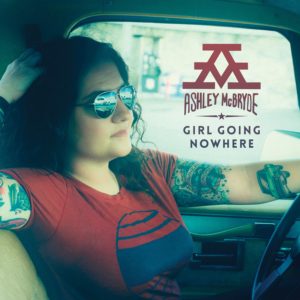 The album kicks off with the title track, Girl Goin’ Nowhere, which is a delicate acoustic picked song which acts as an ode to everyone who told her that she wouldn’t make it in music. She sings with the tenderness of Brandy Clark and has all of the sass of Miranda Lambert in her lyrics. It’s a very understated start to the record but teems with the kind of honesty that we can expect from the rest of the record.

We pick things up a little for the next track. Radioland rips out of the speakers like Bruce Springsteen in his prime. It’s an upbeat foot-stomper that takes a nostalgic look at small town living. There is a lot of soul in McBryde’s voice which lends itself well to these more ‘rocky’ songs.

American Scandal is an example of McBryde’s songwriting chops at their finest. This soaring song has a big chorus and really highlights McBryde’s vocal talents. It’s a song about two lovers not caring what the world has to say about their relationship. McBryde sings “love me baby like Kennedy and Monroe” in reference to the famous illicit affair. It’s arena filling country music at its best.

Things slow down a little bit on Southern Babylon. This song is every bit Southern Gothic country. The lyrics paint a picture of the narrator being caught in a car crash and heading to local bar where they’re all expecting her, it explores the idea of the afterlife. This really is a fantastically well-written song that could be the soundtrack to a film. There’s a big old hook in the chorus that’ll no doubt have fans singing along.

The Jacket takes a step back into that real-life small town songwriting. In the song the narrator asks her father why he still keeps an old jean jacket that is riddled with holes and stains, he goes on to explain the memories that are tied to it. The song takes a nice tempo as McBryde’s smooth vocals glide over the top of it. It’s nostalgic and sentimental.

With Livin’ Next to LeRoy we could almost be listening to Sweet Home Alabama, not only does the song share a lot in common musically but it’s the definition of Southern storytelling. Lyrically, it’s all about the characters in a small town that everyone knows. The song moves along with a brilliant thumping tempo, it’s the perfect driving song. Again, McBryde’s vocals straddle that line between down-home country and blues soul.

The first single from the album is up next. A Little Dive Bar in Dahlonega is another story of small town America. It’s really classic country music, slow and thoughtful with a powerful chorus. McBryde’s vocals are absolutely on point and fill the tune with emotion. The town in the song was the first site of the American Gold Rush and McBryde sings about a “making the best of the worst day kind of night”. It’s a song with real passion and feeling.

Andy (I Can’t Live Without You) is a tender love song for a partner. McBryde sings about all of the things that this person does that drive her crazy yet she just couldn’t live without them. It’s probably a song that we can all relate to in our relationships! It’s another reflective acoustic moment on the record.

Things pick up again on El Dorado, a rocky number that has more Springsteen influence to it, almost sounding a bit like Dancing In The Dark. It’s an upbeat, foot tapping, road song about crossing the country in an El Dorado. It feels like a very autobiographical song as McBryde sings “hotel paper, full of songs I write for you”. It’s another example of how McBryde can balance the slow and soft ballads with upbeat rockers.

The penultimate song is the lyrically clever Tired Of Being Happy. It’s a witty song inviting an ex to come back to her if he ever gets tired of being happy in life. “If you ever get tired of being happy, no I wont be hard to find at all” is the big chorus. It’s another arena sized song.

The album closes out with Home Sweet Highway, another song about life on the road. It’s deep and soulful, making it the perfect close to the album. McBryde really shows off her stunning vocals on this one, finding herself in a reflective mood as she travels down the road.

There was a lot of hype over the release of this album following Ashley McBryde’s breakout performances at Country2Country and I’m pleased to say that she’s absolutely hit the mark with this one. McBryde’s style of songwriting focuses very much on down-home, small town stories and has an amazing personal quality. There are many similarities with the likes of Brandy Clark, Miranda Lambert and early Kacey Musgraves. The power and soul in McBryde’s voice and the sheer ease with which she shifts gears through tempo and style makes the album a joy to listen to from start to finish. Here’s to hoping that Ashley McBryde gets the recognition that she deserves for this record and really makes it into the big time! This is the type of music that many country fans have been waiting for!

Southern Babylon, Livin’ Next to LeRoy, A Little Dive Bar in Dahlonega