Around a month ago we spoke to Ashley Campbell before she hit the stage at the O2 Arena in London to pay tribute to her late father, Glen Campbell. Having played in his touring band for many years, Ashley is now stepping out on her own and has already been confirmed to play Black Deer Festival in June and The Long Road in September, meaning she’ll feature at all three of this years major country music festivals in the UK. We caught up with her just before the release of her album The Lonely One to see how she was feeling before the release and before playing The O2. 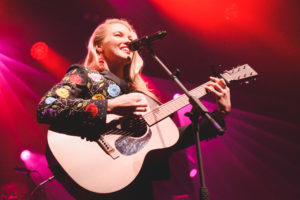 Welcome back to the UK! You’re here for C2C Festival this weekend. How much are you looking forward to play at the festival?

I’m really looking forward to playing. I played it two years ago and it was so much fun, I’m excited to see how much it’s changed and I’m really excited because I’ll be playing the main stage this year! That’s pretty big! Especially with my album coming out, it’s all very exciting, I can’t wait for people to hear the record!

Absolutely. Like you say, the festival has grown a lot over the years and I guess playing the O2 Arena must be quite daunting…

Haha! Luckily I’ve had some good training from touring with my dad so I don’t get many butterflies. I’m sure when I get in there I’ll see how many seats there are and it’ll be exciting scary!

Well, playing with the legendary Glen Campbell, I’m sure you’ll have seen some fantastic venues. It’s all in a days work! Interestingly, I know the set that you’re doing is a tribute to your late father. Can you tell us what you’ve got planned?

I don’t have a lot of time so I’ve kind of had to do a medley with a couple of his hits. I also want to play the song that I wrote for him, Remembering, so it’ll be a mix of our songs.

I’m sure it’ll be a wonderful tribute. We also found out that you’ll be back here in June for Black Deer Festival. It seems like you’re heading over a lot?

Yeah! I love coming over here so we’re definitely looking at coming over more. The Black Deer Festival looks so fun, it’s a definitely a fantastic list of performers that are playing. I’m really excited to see Iron & Wine and Jason Isbell.

Absolutely. It’s a slightly different set of artists to C2C. I’ll come on to the album in a moment but your music seems to be bridging a little bit of a gap between country and Americana?

That’s nice to hear you say that because it’s what I’m going for!

On top of all of this, you’re touring the UK after C2C and playing some shows. It must be quite cool to head outside of London and see some crowds?

Yeah definitely. It’ll be nice because it wont be as rigorous of a schedule. I love being able to come from such a big venue to smaller and intimate venues and have a better chance at connecting with the crowd.

Last time you were over here, how did you find the crowd reception? Did you find it much different to what you’d get at home?

It almost feels like, if I could personify the crowd, it’s like someone you’ve always known. They’re nice and attentive, they listen, so it’s almost like there’s a familiarity.

I guess that must be nice as a songwriter, to have those crowds where you can connect?

Yeah definitely. It’s easy to talk to them.

Moving onto the record. It’s called The Lonely One. How excited are you to get it out there?

I’m so excited! It’s four years in the making! I’ve been writing these songs since I moved to Nashville. I recorded the album last November so I’ve been working on the mixes for a whole year. I was ready yesterday!

I’m a big fan of the things that sit a little outside of the pop-country world and I think that’s why I liked it so much. It does manage to fluidly move through a few genres. Is that something that you set out to do or does it come from your influences?

I think it’s a mix of both. I didn’t just want to do one type of song for the whole album and it’s also just what I organically write. The goal was to make it fluid, so it doesn’t seem like a Jekyll and Hyde kind of thing and people weren’t thinking “where did that come from!”

To those who don’t know your music yet. How would you describe the influences that form part of your sound?

It’s hard to describe! I like to use a lot of acoustic instruments with a big sound. There’s a Fleetwood Mac kind of thing going on.

As a listener, there are some really fun songs on there but also some quite deep numbers. Are a lot of these autobiographical?

Yes, there’s definitely a lot of personal stuff on the album. When I write a song I try to keep it as close to the truth as possible. Sometimes a song just writes itself if it’s that close to the truth. Of course some of them are just fun stories that are taken from certain experiences. Some are a little more literal.

I guess you’ve had a lot of experience to draw upon, being the daughter of one of the great songwriters and performers. There’s obviously a lot happened in the last few years, do you think that it’s affected you as an artists and the songs that you write?

Yes definitely. Dealing with that and taking care of my father has forced me to mature quicker than I would have.

It must have been an amazing education in music being out on the road with his band and learning?

Yeah. I’ve always been a ‘watch and learn’ kind of person and my dad was one to watch!

I know you worked on the album with your brothers. How do you find working at such close quarters with family?

We definitely have gotten to know each other from touring so we know how to work with each other to get the best results and not get on each others nerves!

Do you have many expectations for the record or is it a case of releasing it and seeing what happens?

You know, I try not to define success anymore. I just hope that people love it and it means something to someone. When you’re making something so personal you definitely have moments of thinking “is anyone going to like it?!” That’s why it means a lot to me when I hear someone say that a song resonates with them and means something to them.

Speaking personally from my family experience, your song ‘Remembering’ and the documentary about your father and his struggles with Alzheimer’s are both great examples of how you can bring people together and make them realise that they’re not alone in dealing with these things. Is that something that’s important to you when putting music out there?

Absolutely. That’s something that’s important to me when I listen to music, I connect with it. I’m sorry that you have to go through it… sending you phone hugs!

Just to wrap things up, it’s brilliant to have you here in Britain. Have you got plans to make it a regular touring stop?

Yeah, I hope so! I’m coming back in June and then we’re talking about something in September and October. Hopefully I’ll be here a lot. Maybe I’ll have to get a place here!

You’ll be paying taxes before you know it!

Ashley Campbell returns to the UK for shows at Black Deer Festival in June and The Long Road Festival in September. Her album ‘The Lonely One’ is available here. 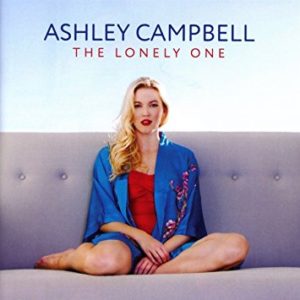