To say that the last few months have been difficult for Jason Aldean would be an understatement. Last year he was forced to flee the stage at Route 91 Harvest in Las Vegas when a shooter opened fire on the crowd during his set. Not only has he had to deal with the horrific sight of his fans being killed and injured whilst watching his show, he’s also had to deal with quite ridiculous comments from some people who suggested that he shouldn’t have run. No artist should ever have to go through that… any of it. We’re 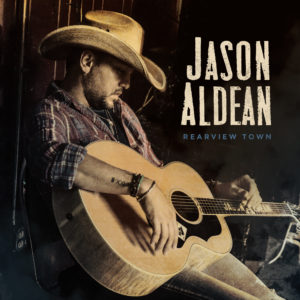 pleased to see Aldean return this year with his latest studio record, Rearview Town. Aldean states that most of this record was in the can before the events in Vegas and that it didn’t change the album in any way, only that he dedicates it to those who were there on that day.

The record kicks off in typical ballsy, guitar riff-driven Aldean style. Dirt To Dust almost feels like a concert opener and it’s certainly the type of song that Aldean has been known for producing over the years. It’s all about the big chorus and those driving guitars, it’s certainly big enough to fill a stadium. Lyrically it doesn’t really deviate from that tried and testing Aldean formula, it’s about partying on the weekend and having a good time.

Set It Off kicks off a little slower than the song before it and builds into a big ‘lighters-up’ chorus. Much like Dirt To Dust, it’s heavy on the overdriven guitars in the chorus. It’s very similar to the opening in its theme too, it’s a song about having a good time and partying. There’s really not much to seperate the two openers here, they’re good songs, just very very similar. They’re ‘typical’ Aldean.

The next song takes a turn towards a love song. Girl Like You has that similarly slow burning verse leading to a big chorus with those huge riffs driving it along. He sings about how he wants to “breathe you in” and how “I’ve never met a girl like you” over this rousing tune. These first three songs are clearly anthemic, stadium-rockers.

Next up is You Make It Easy and finally we have a real change of pace! This bluesy number takes the foot of the gas slightly and brings a little more soul to proceedings. It’s a style that I’ve not really heard Aldean attempt before but he does it fantastically. The song has an almost Lynyrd Skynyrd vibe to it, especially with the slide guitar solo. It’s nice to see Aldean do a song like this, it’s a foot tapper, it’s a sing-a-long song and it’s just the tonic for those big guitar riffs.

It’s clear from the start of Gettin’ Warmed Up that we’re shifting gears back to country-rock. After the rest-bite of the last track it works well though. It’s another song about partying hard and will work brilliantly during a live show.

Blacktop Gone is a road song about how he can’t be tied down and needs to be out on the road and on the move. It’s musically very similar to most of the other songs on offer here and relies heavily on Aldean’s solid vocal over the big guitars.

We have a special guest on the next track! Miranda Lambert lends her vocal to the reflective Drowns The Whiskey. It’s a great heartbreak song with clever lyrics about whiskey not doing its job to help you forget bad memories but this time “the thing that really gets me is how your memory drowns the whiskey”. Miranda Lambert is a fine vocalist and her voice adds the perfect touch to this song. I really can’t stress enough how nice it is when Aldean slows the pace down like this, he has a fantastic voice for these heartbreak country songs.

Up next is the title track, the reflective Rearview Town. It’s a song about leaving a small town and how it’s no longer the place that it once was. Aldean often does a great job of presenting his side of small-town America and this song is no different, it’s a slow burner that chugs along as he laments a place that “ain’t nothing but a rearview town”.

Love Me Or Don’t is a song from the perspective of a frustrating relationship where it’s stop-start and it feels like a game. It’s got that characteristically big chorus and plenty of punch to it.

Track ten is Like You Were Mine and Aldean brings back his spoken-word singing much like on the classic Dirt Road Anthem. It’s all about a breakup and how you can still keep those old habits whilst you are trying to get used to the fact that you’re not together anymore. Whilst the use of auto tune and rap-esque singing aren’t my cup of tea, it does provide something a little different.

Better At Being Who I Am is a much more stripped down and emotional track. It’s almost like the ‘part two’ of Like You Were Mine, where he has come to terms with a relationship ending and can see how it is for the best and how he can now be who he really is. It’s a moment that everyone experiences after a breakup and the song really conveys the mix of sadness and happiness. “Your world and mine are worlds apart, this square peg, round hole thing’s too hard” conveys this realisation that giving up is the best option. Great song. Surely it’ll be a single.

Aldean takes things back to the rocky side with I’ll Wait For You. In short it’s another rock song about love but it’s also a good time to mention how great Aldean’s band are. The guitar work on the record is fantastic and really is up there, along side Eric Church’s band, as some of the best in country music.

Ride All Night is a laid back song about showing someone around your home time and having a night to remember. The banjo rolls along nicely in this tune, giving it a nice country vibe and a rare sight of roots instrumentation at the forefront above the big guitars.

The penultimate song on the record is Up In Smoke. It sounds someone like early-00’s rock with it’s distorted guitars. Lyrically it’s about whiskey, having a good time and a woman. Quite a favourite theme of Mr Aldean.

The final track of the album is also the name of Aldean’s latest tour, High Noon Neon. It’s a big ballad about the end of a relationship and closes out the album in an appropriate way, not straying far from the sounds and themes that have come in the songs before it.

It’s hard to know how to feel about this record. I read in the press release that this was a bold new change of sound for Aldean… it’s not. There are 15 songs on Rearview Town and the majority of them sound the same. There are some highlights in the form of You Make It Easy and Like You Were Mine but there’s just so much repetition. It’s clear that Aldean isn’t a songwriter and there just isn’t any real lyrical depth to the record, it’s all small towns, whiskey and women. I don’t want to seem harsh because this record does exactly what a Jason Aldean record should, it provides enough stadium-sized rock anthems to take out on the next tour. For me, I want more from my music, I want to feel something and I really didn’t here.

You Make It Easy, Drowns The Whiskey, Like You Were Mine