Ever since I discovered his debut album Delilah and saw him play Manchester’s Deaf Institute in 2016, I’d been desperate for Anderson East to make a return to the UK. Early 2018 saw him release his latest LP Encore, and sure enough, he announced a European tour. There were only two UK dates on the tour, perhaps testament to the fact that he’s still working on getting a foothold in our country, but we could be sure that Anderson would bring his a-game. 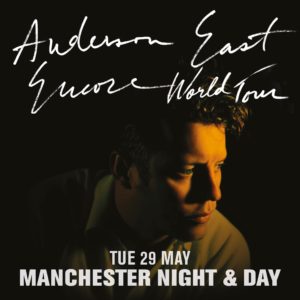 The venue for this show was Manchester’s Night & Day Cafe, a nice little bar in the city’s Northern Quarter which serves good beers and hosts fantastic intimate shows. The venue was three quarters full and certainly starting to warm up when Anderson and his six-piece band made their way onto the stage. Kicking off with Girlfriend from his latest record, Anderson wasted no time in showing off the gutteral screams and soulful gravelly notes in his voice. There were times where the crowd could literally be heard saying “what a voice!”. The set was heavy on songs from Encore, with the barnstorming Surrender and Sorry You’re Sick following. By this point, sweat was dripping off everyone in the place!

The slightly slower tempo songs came next in the form of Pick Up My Pieces and Chris Stapleton co-write King For a Day. This gave everyone a chance for a breather and Anderson an opportunity to show off what an amazing voice he has. There are so many singers out there these days who make their way through talent shows and other quick roads to the top but Anderson really proves that there is no substitute for good old fashioned soul.

The first song from Delilah came midway through the set as Anderson and band belted out Devil In Me before doing an extended version of Learning, a song that appeared on Dave Cobb’s compilation record Southern Family. This was a great chance for the band to show off their fantastic chops. It’s really great that Anderson brings them all over with him and gives fans the chance to see such a great, tight band in action.

Without You continued the slower paced songs before things picked right back up again with a cover of Hold On (I’m Comin’), made famous by Sam & Dave and perfectly suited to this whole band. Despite the sweltering heat the place was rocking and the crowd were totally transfixed on the stage. Next up was Anderson’s co-write with Britain’s Ed Sheeran, All On My Mind, a song that sounds slightly Bond theme-esque.

Anderson rounded off the set with a blistering version of This Too Shall Last. He told me before the show that this was a favourite of his to play live and you could see just why as he ripped through a great solo on his Strat, jumping on top of the monitors to get closer to the adoring fans.

After a brief encore, slightly strange in a small venue, the band came back on to A House is a Building. After this we had to run to get the last train home! That’s the downside of a show starting at 21:30, many fans were filing out before the end in order to make it home. For those who caught the show however, there were surely no disappointed patrons. Anderson and his band absolutely brought it on the night and showed why they deserve to be considered along with the top live bands around these days.

If you haven’t heard any of Anderson East’s music yet, I can’t stress enough how much you’ll get from it. He’s an artist with a fantastic songbook at his disposal and a voice to back it up. Go and check him out today!

Check out our interview with Anderson from the tour here. 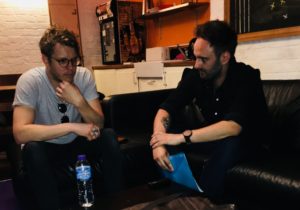