American Aquarium, as we know it now, has been on quite the journey. A couple of years ago the entire band upped and left, with a decade of touring wearing them down and causing a mass exodus. Lead singer/songwriter BJ Barham was left alone and at a crossroads in his life, give it all up or dust himself off and keep going? Luckily for fans of the band, Barham assembled an entirely new lineup, ready for the rigors of the road. Following struggles with alcohol in his 20’s, Barham is now a reformed character, finding his way through a world that frightens, saddens and excites him in equal measure. 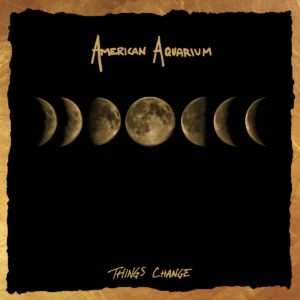 The title of this new record says a lot, Things Change, this is something that’s not just true for the band but for the world in general since their last run-out on the album Wolves. The spotlight is firmly on America in the opening few songs, Barham’s Springsteen-esque vocals recall that fateful election day in The World is On Fire, despite it all he encourages his daughter to break through the walls despite him being left “speechless” by the state of his country. It’s not just about the election though, it’s so much more, he sings about the hate that his grandfather fought against. It’s not a battle of good vs evil but a civil war between us all.

Barham seems to use this record to explore the changes in his life. Crooked+Straight is all out rock ‘n’ roll with southern storytelling, it’s Barham singing straight from his autobiography, being uninspired in his 20’s, his band losing the fight and much more. The same can be said for a lot of the songs on the album, Barham is nothing if not honest about his journey. When We Were Younger Men and album closer Til The Curtain Falls allude to this abandonment.

It’s not all bottom lips out and wondering what could have been though. Barham is clearly settled into a much better place in life now, as the initial fireworks of the album die down there is a raw sensitivity to the lyrics. “Now I’m in a good place, I’m walking that straight line, I’m just getting along righting these wrongs” are the words of a man who can appreciate his journey, his imperfections and those who helped to save him during One Day at a Time. Barham’s wife is clearly an important part of this journey and potentially the only constant that he’s ever felt.

Musically, this is a hard record to tie down. Work Conquers All offers Ryan Bingham-esque Texas dancehall country with pedal steel giving it all the country that you can handle, Things Change is pure Americana that could have come from one-time producer and friend Jason Isbell, there are hints of Petty and Springsteen in Tough Folks, maybe even a little Dropkick Murphys. That’s the beauty of this record, it’s so lyrically rich yet manages to give you a different approach on each song.

Things Change is a surprisingly upbeat album considering the themes. With his country and his band falling apart around him, you wouldn’t have blamed BJ Barham for heading the same way. He hasn’t though, he’s dusted off and become stronger than ever. The new lineup of the band is stellar and will surely make for a great live show. Barham is someone that we can all relate to, he’s been down and people have counted him out yet he comes back with sheer talent and southern grit. There is a lot to be taken from this collection of songs. Things change. Work conquers all. Tough times don’t last, tough folks do.

Crooked+Straight, When We Were Younger Men, Things Change

One thought on “American Aquarium – Things Change Album Review: Back with a new lineup, BJ Barham tackles politics and life.”