Dierks Bentley is a rare breed of country superstar. Now on his ninth album, he refuses to bow down to the pressures of Music Row to conform and release records that fit their need for radio play and big singles. His last record, 2016’s Black, was a concept album inspired by his wife and exploring the intense nature of love and relationships. Going even further back, a particular favourite of mine is the unashamedly bluegrass Up On The Ridge from 2010, I’d love to have been a fly-on-the-wall when his label first heard that one! The point is that Dierks Bentley makes records for himself and not to conform to trends. He’s got those slightly more radio-friendly tunes, think 5-1-5-0 or Drunk On A Plane, but the real artist in Bentley shines on those songs that mean something to him. 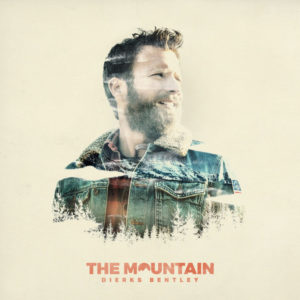 The Mountain is a conscious effort from Dierks Bentley to break free of Nashville and the Music Row way of life. After playing in Colorado, Dierks found himself inspired for the first time since Black, helping him move out of that ‘funk’ that he’d found himself in. Having assembled his long-time collaborators in Telluride, work began on the record, which was eventually recorded at Studio in the Clouds. When you look at the area where the collection was written and produced, it’s not hard to see where the inspiration came from!

On this record, Dierks is fearless in jumping between genres and it really shows that he is making this record purely for himself. The huge, rocking opening track, a collaboration with our favourites Brothers Osborne, Burning Man sets the tone for an album that isn’t going to seamlessly slip in amongst Nashville’s current and rather predictably boring mainstream albums. John Osborne’s ripping guitar and the traded husky vocals between TJ and Dierks make this a must hear. They’re not the only guests on the record, Brandi Carlile appears on the bluegrass soaked Travelin’ Light, a highlight of the album which deals with shedding life’s unwanted baggage.

Dierks is in a thoughtful mood on The Mountain and this soaks through the lyrics. Songs like Living and You Can’t Bring Me Down are upbeat and positive looks at going through life appreciating what you have, the latter being a reference to rising above the ‘gossip’ culture of Music Row and its insular community of writers. Woman, Amen, the breakout single from the collection, takes a similarly thankful look at the positive things and people in life that make it worthwhile. Nothing On But The Stars proves that Dierks can still produce a sexy song, harking back to the Black album, that said this is much different in its theme. It’s about wanting one last taste of someone before losing them.

There is definitely a consciousness of age and time on The Mountain. Dierks has spoken of how aware he is that there will come an end to his career, a time where he can go and live life and climb mountains. This album makes it obvious that he’s considering this already. This is no more obvious that on the final track of the record, How I’m Going Out, Dierks sings “someday somebody’s gonna stop and look, or scratch their head and say, ‘what happened to him? It’s been a while since I heard that name’.” This is a sign of what Dierks sees for his future, there is potentially a hint of disillusion on this record. With an escape from Nashville, talk of Music Row gossip and an eye on retirement, one might question whether Dierks is hitting a major bump in the road.

Despite all of the thoughtfulness there are still those customary Dierks songs to get your foot tapping and put a smile on your face. Goodbye in Telluride is a fun look at a relationship ending but not wanting it to happen in a special place. It’s one that’ll get the fans going live. Stranger To Myself is looking through an old photo-book, smiling at the memories but not wanting to go back. On Sun Of The Sun it’s nothing but freedom and happiness.

For me, The Mountain is a shining example of an artist evolving and producing music that is interesting, engaging and made to last. This album stands together perfectly as a whole but, as Dierks himself says, each track stands alone just as well. I have a huge amount of respect for how Dierks Bentley conducts himself, he’s surrounded himself with a stellar set of musicians, letting top quality up-and-comers like Brothers Osborne in and he creates music with heart, soul and purpose. Once again Dierks has done things his way, he’s done them differently and he’s done them incredibly well.

Burning Man, You Can’t Bring Me Down, Travellin’ Light, How I’m Going Out