After wowing crowds on her UK debut at the Country2Country Festival in March, followed by a string of dates around the country with her friend and producer Kristian Bush, Lindsay Ell has announced that she’ll be heading back across the pond in October!

As part of Country Music Week, the Canadian guitar slinger will play London’s iconic Borderline on Tuesday 16th October before heading north to Manchester for a show at the Night & Day Cafe on Wednesday 17th October.

Coming fresh from the release of her acclaimed debut album The Project and her LP tribute to John Mayer, The Continuum Project, Ell is flying the flag for a new generation of female country artists. On top of this, her new video for the single Criminal has just passed 1 million views on YouTube! Check it out below and grab a ticket to see her in the UK!

Get your tickets for Lindsay’s UK shows here! 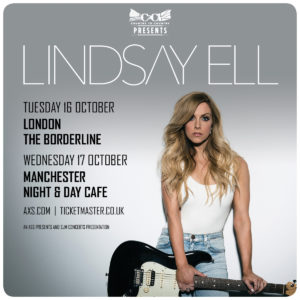