Zack Logan has announced that he will  be joining Grammy-nominated Brent Cobb on Brent’s Providence Canyon tour this Autumn, joining the tour in Dublin (4th September) and London (5th September), then from 12th September 2018 to the 18th, appearing in Cologne, Berlin, Copenhagen, Gothenburg, Oslo and Stockholm (full tour details below)

“I’ve been a big fan of Brent’s music for a long time now,” says Zack, “so I couldn’t be more excited to get to join him on the ‘Providence Canyon’ tour this fall throughout the UK & Europe”.

The songwriter, from Newton, Mississippi, will be playing The Long Road Festival in Leicestershire either side of the tour, marking a debut foray into the UK country scene.

Before arriving on our shores, Logan releases his debut album Raised By Wolves on 3rd August. The 10-track LP has been preceded by the single Annalee, a song which Logan describes as his favourite from the record. The video for the song, as well as full tour dates are below! 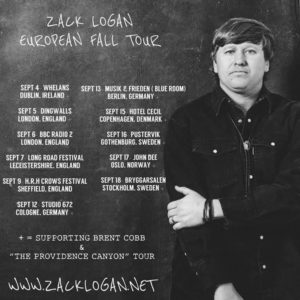