For those people who like to talk about what ‘real’ country is, Cody Jinks must surely pass their strict litmus test. The Texan’s 2017 album, I’m Not The Devil, was a collection of honky-tonkin’ dusty old country songs that immediately grew his fan base to a point where he sold out two shows at the country music mother church, The Ryman Auditorium, last year. Not an easy feat in a city so strongly dominated by Music Row acts and proof that two completely different styles can coexist in harmony. 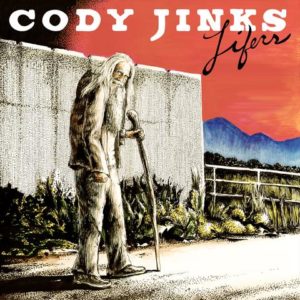 Hot on the heels of his most successful album, Jinks announced the follow up, Lifers. Following up on the success of I’m Not The Devil was never going to be easy but we were very excited to see how Jinks got on!

Lifers kicks off with two songs in Holy Water and Must Be The Whiskey that really show off Jinks’ ability to write a catchy hook. The latter is an especially foot-tapping uptempo number that shows just how easily Jinks can fit in alongside some of the more radio-friendly country these days. It’s not just the modern crowd that could see the appeal though, songs like 7th Floor have a distinctly Eagles-esque vibe that could please traditional music fans.

There’s no doubt that Jinks can write a country heartbreak song and this is shown off wonderfully in songs like Somewhere Between I Love You and I’m Leavin’, which tugs at the heartstrings with Jinks’ rich vocals and pedal steel to break your heart. Colorado is a thoughtful and reflective song about a lost love where Jinks really lets his emotions shine through. The acoustic guitar solo is outstanding on this one too.

The variety of styles on offer just goes to show why Cody Jinks has enjoyed so much success. The bluegrass mountain beat of the title-track, a song with a chorus that will no doubt become legendary at his shows, is about as close to that Wild West (I hate to use this term) Outlaw country that certain people seem to crave so much these days. There’s no doubt that Jinks is producing music that fully deserves to hang its hat alongside the likes of Waylon and Hank. The almost Marty Stuart sounding Desert Wind ticks the same boxes with its reverb soaked guitar and plodding bassline, it could be the soundtrack to a classic western movie.

It’s Big Last Name that really steals the show for me though. This foot stomping slice of honky tonk country is straight from a Texas dance hall. Complete with piano, guitar and pedal steel solos, the song is almost cut like a live tune. Lyrically, it’s a storytelling song about a woman looking to marry into money. It’s just all-out country music! The same can be said for Can’t Quit Enough, you’ll be tapping your foot whether you like it or not!

It feels like now is the time that Cody Jinks should be held in the same esteem as Stapleton, Isbell, Simpson et al. This record is the final step towards achieving that. The quality of the lyrics on Lifers is important. In a scene where people singing about ‘fake country’ (read Aaron Lewis – we get it, you don’t like modern country) has almost become as tiring as those singing about ‘trucks and Friday night’, Jinks cuts through with great storytelling and true heart. “It’s been a long time, Lord, since I sat down and had a cry, it’s sometimes overwhelming, I can’t tell you why” on the final track of the record, Head Case, shows the vulnerability that Jinks is willing to show. The line “one thing that scares the Hell in me is living with mortality” just goes to show that this is a man pouring out his heart and soul and boy is it worth listening to.

One thought on “Cody Jinks – Lifers Album Review: The Texan returns with a contender for album of the year!”