Skip to content
ShareTweet
At 18 years old, Dylan Schneider must feel like he’s living in a dream world. It’s only two years since he was recording acoustic versions of songs at home and uploading to YouTube, now he finds himself in the midst of a UK tour with a huge show at the Nashville Meets London festival set for the weekend. Not bad for two years work! We managed to catch up with him on his tour for a quick chat! 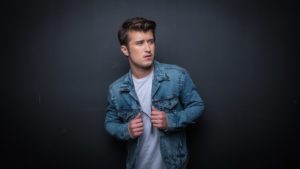 Hi Dylan, welcome to the UK! How excited are you to be over here?
I seriously can’t wait! I’ve been looking forward to this trip for a couple months so I’m happy it’s finally here!
Is it your first trip to our country?
Yeah, this is actually my first time out of the United States. It’s been a blast so far!
You’re only 18 years old and touring thousands of miles from home. What does that feel like?
It’s so crazy to think about. Just two years ago I was sitting in my basement playing guitar and now I am half way across the world getting to perform in front of my fans. Such an unreal experience.
You made your first steps toward success by posting videos online and gathering a huge social media following. Do you think that helped you get more worldwide appeal?
I think it definitely helped! Social media isn’t restricted to one area and so it gave me the ability to reach people in the UK and everywhere else in the world.
How important do you think it is to stay connected to fans via an online presence?
Fans are the reason I am able to do what I do. This is the most important thing that any artist can do. I love getting to be able to talk to them on my socials. It’s always really cool being able to meet some of them in person at my shows after we’ve talked on social media.
Considering how difficult it can be to break onto country radio, do you think we’ll start seeing many more artists break through in this way?
Definitely. I think social media is never going to get any smaller than it is now. People are starting to utilize social media effectively and its starting to break careers.
Moving on to your music, your EP last year ‘Spotlight’s on You’ made it to number 9 on the heatseekers chart. How encouraging was that?
That was an incredible experience for me. Being able to see something I created next to the works of some of my favorite artists. That is a feeling that you can’t even explain.
Do you have plans for a debut album yet?
I’ve been writing pretty much non stop this year. I’m working on it and it will hopefully be out sometime next year!
Who are your major influences?
I love everything from Garth Brooks, to Post Malone, to Nickelback, to Florida Georgia Line. Good music is good music.
You play some shows around the UK this week before hitting London for the Nashville Meets London festival. How excited are you to play some music for us?
I seriously can’t wait. I just got over here two days ago and played my first show in Nottingham last night. I had no idea what to expect but it was amazing!!
Do you have any expectations for British crowds?
I honestly have no idea how this week will go. But like I mentioned earlier, we played in Nottingham last night and it was so cool. Seeing fans singing along to my songs half way across the world is the coolest.
Is the UK somewhere you intend to make a regular touring spot?
I really hope so. This trip has been amazing so far and I’m looking forward to the rest of the week. I will definitely be coming back!!