Rising stars in the country music world don’t come much bigger than Russell Dickerson. After his smash hit single Yours dominated the airwaves (and countless weddings) last year, he dropped the album of the same name, which has now sporned the current single Blue Tacoma. Dickerson has headlined the Nashville Meets London festival in the UK, as well as making his debut appearances at Country2Country in 2018. He’s certainly an artist making waves. This October he will be back in the UK supporting Darius Rucker on his tour, as well as headlining his own show at London’s Borderline. We had a chat with him ahead of his visit. 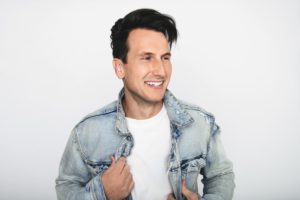 How’s it going Russell? Are you out on the road at the moment?

Yeah. I flew out of Nashville yesterday morning, headed to Buffalo. We’re actually off this weekend from the Darius Rucker and Lady A tour, so we’re doing our own thing.

Brilliant. Have you got a headline show lined up?

Yeah. We did a headline show last night and we’ve got a couple more before heading home for a few days.

Fantastic. So we last spoke at the Sony Music brunch at Country2Country. How did you find that weekend?

It was great. It was really cool to be there with all of our Nashville friends. That was the second time we’ve been over there, we did the Nashville Meets London festival too. It’s been fun to come back over and hang. We got to know you guys and the fans even better.

You got some great reviews over the weekend, we picked you as one of our top 5 of the festival. Did you enjoy playing for the crowds?

Oh yeah! It’s so cool to be in a completely different continent and these people know the songs, love the songs and they know the whole album! To be able to give them the music that they’ve listened to on the record live is a really cool experience!

How does feel coming over to the C2C festival and seeing thousands of country fans, many in cowboy hats, in the middle of London? Is it a strange feeling?

Yeah! It’s totally different to being back home!

You’re back in October supporting Darius Rucker, you have your own headline show and you play at the Royal Albert Hall. How excited are you to walk out on that stage?

Oh my gosh! That’s going to be definite bucket list moment! What a legendary venue and to get to come over and play and warm up the crowd for Darius, it’s so many bucket lists in one night!

Moving on to your album. It’s about nine months since Yours was released. How have you found the general reaction to it?

Man, it’s kind of all working together and every song is one that I tried to envision playing live. To see that come to life, we’re selling out our own shows over here, it’s really cool to be able to play all of these songs and people know them now! That’s one of the most gratifying things as an artist.

Going into the album you had the single ‘Yours’ which was a big hit. That must take away some of the nerves before release?

Yeah. That’s what we tried to do, use the momentum from the single to get the album out.

The road that the single took is quite interesting. You release it digitally first, then made the video which cost about $6 before it was officially released and climbed to number one. Were you always confident in that particular song?

The amount of people who relate to the song is amazing. It’s also become one of the top wedding songs…

Yeah, right! That was a whole other surprise in itself! People using it for their wedding, walking down the aisle, it was huge. That’s why we did the wedding edition on the album.

Obviously you’ve had ‘Blue Tacoma’ out riding the airwaves too. Are there any plans for the follow up to Yours?

We’re always writing, we haven’t start recording yet because it’s not been a year since Yours. We might do a little deluxe edition of this album with some unreleased songs, to keep giving the fans some new music to listen to and jam out to.

Like you say, it’s early days for ‘Yours’ but a deluxe edition is very exciting. Moving on to touring a little bit, you’re obviously currently out on the road with Darius Rucker and Lady Antebellum and you’ve previous toured with Thomas Rhett. I’m interested to know, how much do you learn from those guys?

It’s like with any job, you can read up and study all you want but until you get in the field, that’s where you really learn. Watching TR, Lady A and Darius, it’s great watching them perform and how the crowd react to what they and how can I do the same and give the fans what they paid to see? That’s my main aim, to make some memories with the fans every night and make new fans. I watch and see what they do and how they react.

Like I say, at C2C the fans were really digging your high energy…

Yeah. That’s what we try to do, bring some energy and bring some positivity in people’s lives.

Those guys we mentioned there have made some real inroads in the UK. Do you find yourselves talking a lot about the UK and our scene?

Oh yeah! Any time that’s the topic, it’s just like ‘man, they know the album cuts and the deep songs’. It’s kind of a singles world but coming over here, it’s like they know the deep ones that we worked so hard to create a great album. They know it and that’s a really special thing.

A lot of American artists say that. I guess we still have a strong album culture…

Yeah, I love it! I love that it’s the culture.

Has the UK always been somewhere that you’ve wanted to come and play your music?

100% yes! I told my team, I want to go big and wide! It helps that it’s such a great culture. If it sucked coming over there it’d be less gratifying. It’s so fun and so easy to transition into UK territory. I love it! I love coming over!

Can we expect to see the UK and Europe as a regular touring spot for you in the future then?

Yeah, absolutely! There’s no doubt about it! We have real fans there, it’s not make believe or fake numbers, it’s all real. I’d love to keep building and building my fanbase over there.

Well, we really appreciate that you guys take the time to come over. It can’t be easy and it’s not cheap!

We feel that! We feel appreciated when we come over, it’s not like entitlement or anything. We really do feel like you guys appreciate the jetlag and the costs too. It’s really fun to come over!

Russell hits the UK in October with Darius Rucker. He’ll also be playing a solo show in London! Get your tickets here! 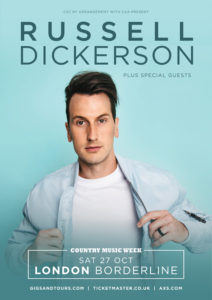 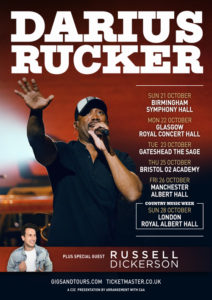