Following the release of his debut album, Mr Jukebox, Joshua Hedley has been pleasantly surprised with the reaction. The collection of traditional sounding songs isn’t perhaps the type of music that the mainstream country fan listens to at the moment, yet he’s seen great success since signing for Jack White’s Third Man Records. Rolling Stone magazine credited him with “making sad songs cool again” and you won’t find us doubting that. Hedley is a well-respected artist in Nashville and has been for many year, he previously played fiddle for Johnny Fritz and was a regular on the Music City scene. This year he heads over for a run of shows in the UK, including a festival slot at The Long Road. We were lucky enough to catch up with him for a chat beforehand! 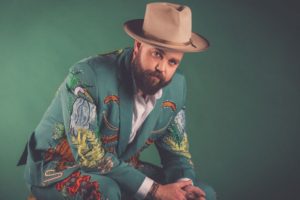 How are things? Earlier this year you released your album Mr Jukebox, how has that whole ride been?

Man, it’s insane! Touring for that just really kicked into high gear. We’ve been all over and we’re fixing to keep doing, I’ve got three weeks off here and I plan on doing as little as possible! I’m about to be gone for about two months after that!

Speaking of the album, how did you find the reception to it? It seemed very positive from what I saw?

Yeah, man. It’s been surprisingly good, I didn’t know what to expect when I put out a record like that. A lot of people have been doing the whole throwback thing but they usually gravitate more towards that outlaw, Willie and Waylon sound, so I took it back a little further. I wasn’t really sure how people were going to like it but they seem to be enjoying it! I’m glad!

It must be nerve-wracking releasing an album so traditional in its sound? Especially in a scene that is so oversaturated with those mainstream, pop sounds…

Yeah, especially in the world of mainstream country music, it’s pretty much dominated. It’s a typical good old boys club dominated by a few people making the same song over and over again. I think it’s great that we have people now like Margo, myself, Jason Isbell and Sturgill who are shaking it up. Hell, Stapleton’s broken into that club, he made it in there somehow! That’s good news for everybody.

I was going to say, it seems like there is a real rising up of fans who are craving it now. Do you think Stapleton was almost the start of it? People heard him and thought “you know, I like this. I want more of this, it’s genuine and real”?

I think Stapleton… he’s not new. He’s been writing forever, he’s been around Nashville forever, I’ve known about him for ten years. I think he’s just a product of people’s frustration. I think people found him in a time where it was so overwhelmingly the same old bullshit. They were ready for something else and Stapleton was right there on a silver platter for them. I think it’s great. I think it shows that people are looking for more artistry in their music and it opens a huge door for people like us. I’m grateful for all of that.

There are so many artists that have helped to get that exposure now. I guess it’s a little different here in the UK as we don’t have country radio so find our music in a slightly different way. Have you been over here yet and seen much of a difference?

Oh yeah! I’ve found that, I’ve been saying this lately, a lot of us get lumped into this umbrella that they called Americana and I think it’s funny that Americana music is more popular outside of America. I’m going to Norway on this trip, those people go bonkers for country music, they love traditional country music in the Scandinavian countries. In the UK aswell and Australia, Germany still likes techno a lot but it’s growing over there too!

Does it surprise you as an artist to rock up in a country thousands of miles away and have great crowds?

I wouldn’t say surprised is the right word but it’s refreshing, that’s something. It’s refreshing to play your own songs, especially ones that sound the way mine do and people are enjoying them. Nobody is complaining that it sounds too old or something!

I’m really interested to know who your main influences are and who it is that has shaped your style?

Merle is the number one. My favourite singer is Johnny Paycheck. I was pretty heavily influenced, especially on this record, I was listening to a lot of early Willie and sort of early to mid-60’s Ray Price. Tammy Wynette, Billy Sherrill stuff, I was heavily influenced by those strange sounds of the 60’s and 70’s. That’s what I was really into when I was writing that record.

Yeah, for sure! Bob Wills was the first thing that I found that led me to country. I was playing primarily fiddle tunes and bluegrass and stuff prior to that but I guess I was probably 12 or 13 when I found Bob Wills and it was all country and western swing and western jazz after that.

I read that you didn’t start writing until your late 20’s. I’m interested to know what led to that and got you writing?

You know, I’d written some songs that weren’t very good prior to that and I sort of gave up on it and decided I wasn’t really a songwriter. I had envisioned that my life would be touring with Johnny Fritz and playing at Robert’s and that was going to be it. I hadn’t really anticipated writing, I hadn’t really thought about, then I had the song Weird Thought Thinker kicking about in my head. I wrote it down and played it for Johnny who really liked it, then he used to have me play it at it shows so I found out that other people liked it too! I started writing a couple more songs and once I got sober, around like 31 or 32, somewhere between there, that really opened up a whole lot. That really helped me be clear headed enough to write. Once that happened I didn’t stop, I wrote about 20 songs in two months! Whereas before it was more like two songs in 20 months!

Moving on to the UK, you’re here in September for some shows, including one at The Long Road festival. How excited are you?

Man, I’m really excited! Got just a little taste of it in May when we did a couple of London shows. I’m excited to get out and see more of the UK and Europe.

Playing a festival opens you up to a whole new crowd too, of course…

Yeah, that’ll be my first UK festival! It’ll be interesting!

Do you see Britain and Europe becoming a regular touring spot in the future?

Absolutely! I wanna play everywhere! I wanna take this thing all over the world! We just had a pretty hectic travel issue getting home from Australia this year and it pushed a lot of us to our limits. Me and the band were talking about it and I think it was my guitar player who said, like Keith Richards said, we get paid to travel. The playing part, I’d do that for free! The travelling is part of what I love about this, I get to see the world! That’s a luxury that’s not afforded to a lot of people and I never take that for granted. I’ve been to Australia eight times and most people haven’t ever been! It’s a blessing and it’s one my favourite parts about what I do, I get to travel and see the world! I wanna take this show wherever will have me!

Absolutely man! Me and the band have been working really hard on making this show the best it can be! There’s a difference between playing a set and playing a show, we’re trying to give people a show!

Mr Jukebox is available now and can be bought here. 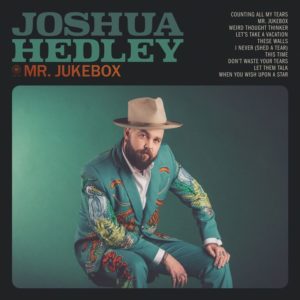 Joshua will be in the UK and Europe in September (dates below). Tickets are available here.