This album starts with the introduction “the man putting the cowboy back into country music” and that seems the best way to start this review. Since he blew the charts away with The Underdog, an album that made him the first independent Texan artist to hit number one in the Billboard charts, followed by Vaquero which hit number two, Aaron Watson truly has been putting cowboy back into country. The soft-spoken southern gentleman has honed his craft in the Lonestar State and beyond for many years and now, with a bagful of hits, it makes sense to give us another live record. 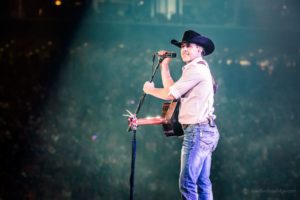 The Houston Livestock Show and Rodeo is the biggest of its kind in the world (hence the title of the album) and, when Watson headlined in 2017, a crowd of over 50,000 took in his show. It seems like the perfect place for a Texan artist to produce a live album. It was a momentous moment for ‘The Underdog’ Watson, one of country music’s newest megastars and nicest people, not to mention an unlikely hero in a genre full of boys in vests singing the same old song.

The album kicks off with These Old Boots Have Roots, a song from the recently released Vaquero. It has all of the ferocious pace that you’d expect from an Aaron Watson song and moves quickly and seamlessly into the rollicking Freight Train before Watson announces Real Good Time by shouting “y’all ready for some honky tonk music, Houston?” If that doesn’t get your foot tapping I don’t know what will!

Some of the more tender moments really help to define this live album. Before Raise Your Bottle, in typically all-American style, Watson invites the servicemen and women in the crowd to stand up for a rousing dedication and applause. He also talks about how the song was written about his father who is 100% disabled, a beautiful tribute that get’s those hairs standing on end. The real show-stopper is a rare live performance of Bluebonnets (Julia’s Song), a song written for Watson’s daughter who sadly passed away. He opens the song with a tribute to his grandmother who recently passed away in Houston. As ever, it’s a highly emotional song and there can’t have been many dry eyes in the house.

Watson channels his inner George Strait on That Look, a song that he uses along with his Texas charm to “score points” with his wife. It’s a song that epitomises Watson in every way: smooth, charming and romantic. Outta Style gives the album a shot of uptempo honky tonk rocking and helps to balance out those more emotional songs, the same can be said for the cover of John Mayer’s Wildfire and the foot stomping Getaway Truck.

The album closer, July in Cheyenne (Song for Lane’s Momma), is an emotional and fitting closer to this live album. The song was written as a tribute to the bull rider Lane Frost, who sadly lost his life in 1989 at the Cheyenne Frontier Days rodeo event. You can feel how poignant this song was when performed at the Houston Rodeo.

The album ends with a new song. Higher Ground was written as a tribute to those affected by Hurricane Harvey in 2017. Watson was inspired by the stories of those who fought to survive and worked together to make it through, “I was out of state touring when Harvey hit.  I felt helpless being so far away,” shares Watson.  “This storm is personal to me. My grandparents lived in, and are buried in, an area that was devastated.  Seeing that on the news and the people there struggling to escape, rescue each other and recover was the inspiration for writing the song Higher Ground.” It’s another fantastic emotional song from Watson.

Live albums can be a tough area to navigate, some go down in history as fantastic reminders of great performances whereas some fail to capture the real essence of an artist’s live show. Live at The World’s Biggest Rodeo Show is a fantastic example of the uptempo and ferocious show that Aaron Watson puts on, whilst also giving plenty of time for his charm, wit and heart. This is an album that perfectly bookmarks a time in his career where he’s achieving his dreams and proves exactly why!

Aaron Watson is in the UK on tour this week! (Dates below) 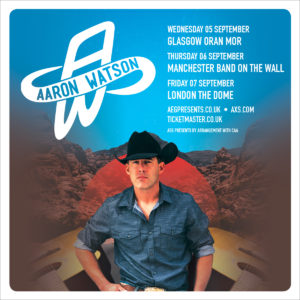