For five years now, Country2Country has been the UK’s go-to country music festival, potentially more through lack of choice than anything else. I will say that Country2Country is a fantastic festival, well run and offering a huge range of massive Nashville acts. 2018 saw two new outdoor country and Americana festivals announced, Black Deer in Kent and The Long Road in Leicestershire. Led by American DJ and country music fixer Baylen Leonard, The Long Road promised to be a celebration of all things country, Americana and roots. It was also held in a location that made it accessible to us northerners! Hallelujah! 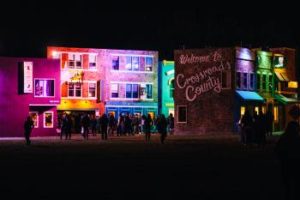 The big talk before the festival was all about Saturday’s headliner, a truly huge act and a real coup for The Long Road, Carrie Underwood. It was heart-breaking to see her have to cancel in the days leading up to the festival, not so much for me (I could live without seeing a Carrie Underwood show if I’m 100% honest) but for Baylen and everyone at The Long Road who had worked so hard to make it a success. It was a real shame to see people complaining, asking for refunds and stating ‘I want my money back, I only booked for Carrie’. Luckily, a cowboy rode in to Stanford Hall like a true hero to save the day and Aaron Watson gladly stepped in to headline.

As we arrived at the festival site, it was clear to see that The Long Road was meticulously well organised. It was a breeze to park and get in. Not the most exciting things to talk about in a review, but always the things that matter! The stages were well presented, the Honky Tonk stage and Front Porch taking the attention for being the most creative. Hopefully next year the Interstate Stage will be slightly bigger as, when Lee Ann Womack was about to hit the stage, there were crowds coming out of the tent and it was impossible to even catch a glimpse.

On to the music, Laura Oakes opened up the Rhinestone (main) stage with a great set. For me, a lot of British country is very very hit and miss at the moment but Laura put on a vocal performance that proved just how much she deserved a shot at the big stage. Her new band (the pedal steel and guitar players had only met that day) gelled well and made for a memorable set. Laura was clearly thrilled to be up there and entertained the crowd well, warming them up for a day of music.

After Laura’s set we managed to catch one of our true highlights of the day on the Interstate Stage. Parker Millsap took us through a blistering 45 minutes of highly charged and blistering soulful music. He and his band were absolutely on fire and had the crowd in the palm of their hand. Millsap’s vocals were absolutely spot on and his ability to reach anywhere from sorrowful harmony to all out screeching was a joy to behold. You get the feeling that Parker Millsap is at the beginning of a road towards something special.

Following Millsap’s set the tent began to fill up just a little more for one of the other highlights of the day, Brent Cobb. Fresh from a tour with Chris Stapleton and a hugely impressive album Providence Canyon, there was a lot of interest in his set, especially considering it was a rare-in-the-uk full band set. Brent certainly didn’t let anyone down and breezed through a sometimes folky and sometimes rocky set, spending plenty of time explaining songs to fans in his soft southern drawl. The night before his set at The Long Road, Brent had been forced to cancel a show in Manchester due to a powercut, something that he was gutted about, he certainly showed what he can do here. Brent and his Low Country Sound label mates really are doing something special, now just to get Mr Stapleton over here…

Due to the elements on the day and the great range of acts, the undercover Interstate Stage was popular. The Wood Brothers offered an experienced set of songs, entertaining the crowd with wonderful multi-instrumentation and great charisma. Their ‘muso’ approach gave listeners a taste of classy, road practiced musicians showing what they can do. I ended up watching their set after having to leave Striking Matches two songs in. I’ve always been a fan of what Striking Matches do in terms of songwriting and there is absolutely no doubt that they’re great musicians but, for me, somewhere they seem to have lost themselves in endless shredding and loud guitars. It might just be me, so before anyone gets upset, I can totally appreciate why people enjoy them. I just want more from a set than watching two people make noise for themselves and not seem to care too much about anything else. Yes, you can solo. Yes, you can turn your amps up loud. No, you don’t have to do that for a whole hour. Dissapointing.

Anyway, my only little bit of negativity aside. Danielle Bradbury came out to give us a nice slice of Nashville country-pop. The great thing about this festival was the variety on offer, with everything from mainstream country through to acoustic singer-songwriters and more. Bradbury’s set had been extended in the absence of Carrie Underwood and she did a good job of showing us what a confident and talented performer she is. Amongst her own hits she gave the crowd plenty of covers, including a version of Lady Antebellum’s American Honey, keeping things going well into the evening. 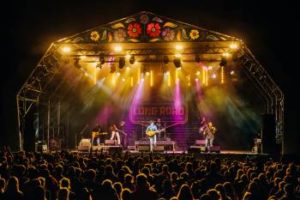 Main stage headliner Aaron Watson may have been upgraded to the position at the last minute but this ain’t his first rodeo (literally, he headlined the Houston Rodeo last year for 70,000 people). Wowing the crowd with hits from his latest record Vaquero and many from further back in his catalogue, Watson showed the love that British crowds have for him is very well deserved. He knows how to put on a show and entertain, for me, as sad as it was that Carrie couldn’t make it, Aaron made everyone forget about it very quickly!

All in all, Baylen Leonard and co have done a stunning job setting up The Long Road Festival and, despite the late cancellation of a headliner, pulled it off to perfection. This is a festival that I can only see growing year on year into something even bigger and better. This year’s line-up was so varied and filled with so many fantastic names from the country, roots and Americana world that we can only hope that it’ll grow in the same way. Well done to all involved!