To say that Danielle Bradbery has thrown herself into performing in the UK this year might be an understatement. After making her debut at C2C in March, she headed back to play The Long Road festival in September and then in November, alongside Devin Dawson, supports Thomas Rhett at the legendary Apollo in London. She’s confessed that playing in the UK has become an infatuation for her and that the response from fans has got her wanting more and more! We spoke to her backstage at The Long Road last month! 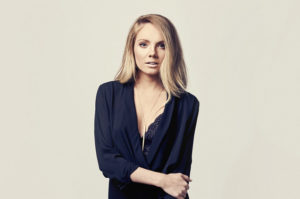 How does it feel to be back on our shores again?

I am so happy to be back! I’ll come any time that y’all want me to or even if I want to, I’m gonna keep on coming back!

It’s your second UK country music festival of the year. Do you feel like you’re starting to build a solid fan base?

I really do. The first time that I was here for C2C, the fans are unbelievable, they’re so loyal and listen to everything that you have to say and sing. Being back for the second time is even better.

Did you still feel the buzz when you got home?

I was! With social media, every time that I went on there’d be pictures that everybody was still posting and people saying “please come back!” Feeling that love means a lot!

You did a little bit of a songwriters show this morning, how was that?

Yeah, I did an all-female songwriter round this morning and it was kind of like a honky tonk scene, they did an amazing job with that! A lot of people showed up and were singing along that early in the morning. I got to share the stage with two amazing women that I haven’t been able to meet before, it was really fun and a good start to the day!

It must be cool with the whole ‘all-female’ vibe. Is it weird to come over here and do that when the argument continues back home about the female role in country music?

It’s a shock coming over here and it being all women! I think that’s so awesome and I keep telling everybody that I’m going to teach a thing or two to people back home!

Oh, it’s so refreshing! I’m so honoured to be a part of that and feel the love from everybody.

I know you’re back with Thomas Rhett soon, that’s three times in a year!

Thomas has been over a few times now and laid his roots. It feels that more and more artists are taking the trip and seeing the UK as a second home. Is that how it feels over in Nashville now?

Oh yeah! It’s the thing to do! If you don’t come over here then you’re doing something wrong!

How much are you looking forward to your set here tonight? It’s been extended now too!

It is extended on the Rhinestone Stage. I’m doing a 60 minute set which is fun, a lot more songs! It’s the main stage, it looks great out there and all the fans are ready so I’ll be singing a couple of my old songs, new songs and a couple of covers. Hopefully I’ll make the show fun for everybody!

Obviously, you’ve got the Thomas Rhett show later this year but are there any plans for your own headline tour in the UK?

Oh man, I sure hope so. We haven’t talked about it just yet or made any plans but I would love to!

How about music wise, have you got anything on the horizon?

I’ve been writing a bunch in Nashville. We always try to keep writing for new songs and refreshing sounds, we’re always thinking about the next step!

Now that you’re travelling the world and seeing different places, do you find that affecting your songwriting?

Yeah, it does affect it a little bit but I don’t think in a bad way at all. I get inspired every day and to come over here and get a feel for how the fans react and what they love sparks other things, when I do come home I have all these new ideas! 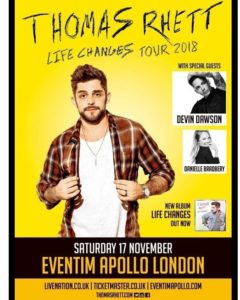