Having sold out a six night residency at Nashville’s Ryman Auditorium last year, Jason Isbell & The 400 Unit are well on their way to securing their place as one of the best live bands around. The band are made up of Jimbo Hart on bass, Chad Gamble on drums, Derry DeBorja on keyboards, Sadler Vaden on guitar and Isbell’s wife, Amada Shires, on fiddle and make up one of the tightest and most effective bands around. All this said, it makes perfect sense that they would release an album, especially off the back of the critically-loved album The Nashville Sound and a momentous run at ‘Country Music’s Mother Church’. 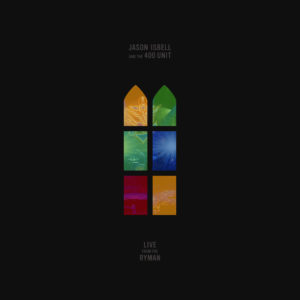 Live From The Ryman is a 13 song collection that pieces together songs from various nights across the run, the band record all of their shows so presumably they just picked the best. It was also mixed by the legendary Dave Cobb. Live albums can be a difficult subject, I often prefer a whole live show from start to finish but perhaps this does work better as an all round ‘best of’ from their run at the Ryman.

From the opening crunchy guitar riff of Hope The High Road, its clear to see that this record manages to capture the energy of Isbell and his band at their best. The vocals are powerful, especially when Isbell and Shires harmonise on “there can’t be more of them than us”, and the slide guitar solo is perfect, this is what this band do.

Many of the songs from 2017’s The Nashville Sound appear on the album, the rocking Cumberland Gap needs to be listened to at full volume to really be appreciated, as drummer Chad Gamble drives the song along with Isbell/Vaden’s fuzzy guitars. Similarly, the political White Mans World is delivered with power and passion, punctuated by slide guitar and superb fiddle playing. This song, written for their daughter, is perfectly harmonized by Isbell and Shires; it’s shame that her vocals aren’t just a little louder.

The new album isn’t the only winner here, there are great performances of songs like 24 Frames and Something More Than Free from the 2015 album of the same name. The real highlight from that album is in the form of The Life You Chose, an energetic folk-rock song where the band are as tight as anything you’ll hear. Elephant is always an emotional song and Isbell puts in a perfect rendition of it here, although I do find it odd that the audience claps on the one right at the start but it doesn’t continue… weird editing or something that genuinely happened? Also, the shouts of ‘woo’ throughout the intro are strange for a song of such weight, but hey, I’m English.

I have to say that the song choice on this record is perfect. Soaring moments like Flying Over Water and Super 8 are perfectly matched with the likes of Elephant, Cover Me Up and The Last of My Kind, complete with a brilliant extended outro. It feels like a well-crafted set list, full of ups and downs for the listener. An outro of the haunting If We Were Vampires ends the record perfectly, although it doesn’t feel quite finished as we hear Jason say “there’s another of that new record”. I guess the record isn’t trying to reflect a live show in it’s entirety.

There’s no doubt that Live From The Ryman is a superb example of a band at the top of their game. They don’t stray too far from the original versions of songs here but do somehow manage to capture the energy and musicianship that Isbell and The 400 Unit bring to the stage. The record isn’t a live show experience, it’s not one night from start to finish and there’s little interaction with the crowd (any times that you do hear Jason talk are strangely quiet and sound a little like background noise). None of this is a criticism however, the album provides fans with a brilliant document of how good this band are live and the superb music that has been produced over their last three albums. In a time where the heart of Nashville is becoming more and more throwaway, Isbell and his band have created some history that will stand the test of time.