Heading into its sixth installment, Country2Country, the largest country music festival outside the USA, has announced a stellar lineup for 2019! Following on from a highly successful year in 2018, featuring the likes of Tim McGraw & Faith Hill, Kacey Musgraves and Little Big Town, the festival has managed to secure some of the biggest names in country music.

As always, fans eagerly awaited the announcement, made by BBC Radio 2’s Whispering Bob Harris at the Shepherds Bush Empire ahead of the CMA Songwriters Show at the same venue. This years headliners include a C2C first-timer and one of the biggest stars in the genre, Keith Urban, Lady Antebellum and Chris Stapleton will close out each night. Joining Urban will be Brett Eldredge, UK fan favourite Cam and Chase Rice. Lady A will be preceded by Hunter Hayes, Dustin Lynch and Carly Pearce, whilst Stapleton will share the stage with the legendary Lyle Lovett and two absolute favourites of C2C in Ashley McBryde and Drake White & The Big Fire.

Further acts and stages will be announced in the coming months. Tickets go on sale on Friday 26th October. Follow the links below: 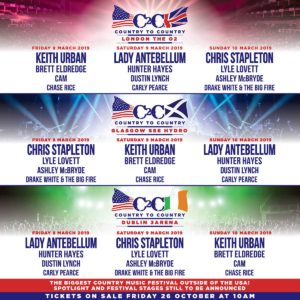