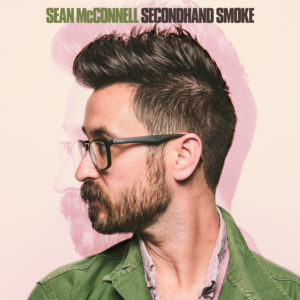 ‘Secondhand Smoke’ is a 13-song cohesive collection of modern folk music asking provocative questions about how we become who we are, what and whom we love, and the growth, pain, and freedom that come with accepting that some answers might elude us forever. “The older I get, the more I find that is what it’s all about––that there is no way to answer it all,” McConnell says. “Being comfortable with mystery is a positive thing in all aspects of our lives. I definitely explore that in these songs.”

The album’s gorgeous title track and first single was recently cited in Rolling Stone’s “10 Best Country/Americana Songs of the Week (10/19). Check out the song HERE.

Produced, recorded and written by McConnell in his Nashville home studio, ‘Secondhand Smoke’is a striking intimate portrait of life’s intricacies. “These are stories that people are familiar with,” adds McConnell, “and they steer the ship in a certain direction, then leave you off at this ocean of possibilities that we didn’t plan on the story taking us to.”

‘Secondhand Smoke’, McConnell’s 13th album, is the follow up release to the critically hailed Undone, an acoustic re-release version of McConnell’s 2016 self-titled album, featuring ‘Nothing On You’, a collaboration with Lori McKenna. Secondhand Smoke is available on February 8th, 2019 – for more information visit www.seanmcconnell.com.
TRACKLIST:
1. Secondhand Smoke
2. Here We Go
3. Shaky Bridges featuring The McCrary Sisters
4. Everything that’s Good
5. I Could Have Been An Angel
6. Alien
7. The Devil’s Ball
8. Rest My Head
9. Greetings From Niagara Falls
10. Another Song about A Broken Heart
11. I Don’t Want To Know
12. Say Goodbye
13. Wrong Side of Town