It’s been a crazy year for Drake White. He’s released an EP, Pieces, split from Big Machine Records and extensively toured the United States, all before heading over the pond for his first ever headline UK tour. In the last few days he’s also announced that his band, The Big Fire, have split and that he will be pursuing his music alone. We sat down to chat with him in Manchester as he toured the country. 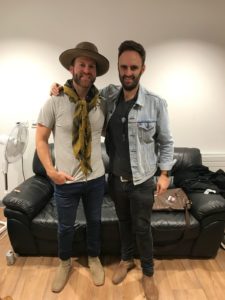 Drake, you’re a couple of nights into your UK tour and you’ve also taken part in the CMA Songwriters series shows in Europe. How much fun are you having?

Yeah, I’m just glad to be back over here. I did the CMA Songwriters thing. I’ve been wanting to come back over here, we’re building a cool thing, I could feel it at the C2C Festival a couple of years ago. I’ve always followed the bliss, the fans and where we are celebrated and people react to the music. Last night in Glasgow felt amazing and we’ve got a lot of tickets sold for the rest of the tour. It’s exciting.

It’s a dream. It’s a straight up dream. It says a lot for the European fanbase that we can come out here and sell-out six shows and kind of be on our own. It says a lot for the band and the determination that my team has shown for the last couple of years. People ask if we’re coming back and I’m like “man, we’re building something over here. We’re trying to build an army and have a good time”.

What is it that really does it for you over here? You came over for C2C a couple of years ago and built a fanbase immediately. Is there a difference here with the crowds that helped you force such a connection so quickly?

People ask that and I don’t think there’s really a difference, the US is just so flooded with opportunity. We have great fans everywhere but the European fans are a quieter bunch that wait to the end to erupt and cheer. That’s just a difference in lifestyle, I don’t know, I’m not sure what it is. They’re both great, a sold out show is a sold out show, it’s a great place to be. Every different city has their story and everybody has their personality.

You’re coming here off the back of the EP Pieces, which was a little bit different, especially the single Girl In Pieces. How was the reaction to that?

For sure. It was good man. I worked with a different producer and kind of went down a rabbit hole. You’re just creating, at the end of the day I know what my fans want and I know what I want. I’m creating for what I love and what I feel like is going to react. I feel like it was good, if I’m being honest, it could always have been better. Not the reception, the reception from the fans was great but something to take us to the next level, you know? It sounds great, the songs are great, I feel like we put a great foot forward. We’re working on some stuff now that I’m excited about too. I really liked Pieces and that effort, it was a good time. 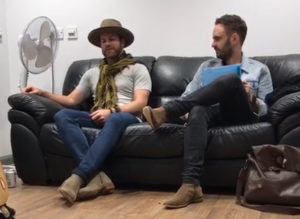 Is it more difficult to see it as a success because of the radio play in the USA accounting for so much? I was talking to Charlie Worsham, he was saying he’s not really found that big hit to blow him up on radio but at the same time, he’s taken that scenic route and Vince Gill always promised him that would matter in the long run…

Absolutely. I was kind of raised with a farmers mentality that you reap what you sow. You put your seed in the ground and have faith that the good lord’s going to bless it. We’re building a fanbase, writing songs and performing them every night, I know that if I keep doing that going forward and stay true to the art, keep on living and travelling and having those experiences, everything will work out for the good.

You’ve recently left Big Machine Records. Does that give you a freedom now to blaze your own trail?

It’s just a thing, man. This business and life, I have a good time. Yes, there’s a transition and it takes time but I’m a real person. You want things to work but you trust the path and keep going and writing songs. That’s what I’m going to do, I’m working on a whole other thing and I’m excited about it.

We spoke earlier this year on the phone after you’d released Pieces. At that point you liked the idea of releasing music to fans as often as you possibly can. Are you still stick with that idea?

Yeah, that thought is still there. I believe that we need to release more music. Everybody overthinks this shit, it’s not that hard. You just go in there and we create a lot of stuff, when we’re live we thrive, so let’s go out there and do our thing. Let’s be natural and not try to fake it and put a bunch of effects on it, just play your instruments and make it that deep rooted Alabama sound of where I’m from.

I guess the energy in that live show is your big strength?

Yeah, man! We’re figuring out how to bring it to the studio but absolutely, I love to get on a stage and perform and entertain a crowd. That’s what I love to do and that’s what I’ll do for the rest of my life.

It must be reaffirming during these little transitional periods to know that you can still hit the road and sell out shows, whether it’s in Alabama or Manchester, UK?

Yeah. Man, I don’t even let my mind go there. It is what it is, everybody looks at artists like very fragile eggs. There are ups and downs but, at the end of the day, my faith is that I have a band, I have a fanbase and I have this guitar in my hand. I can do anything. It’s up to you to keep that train going. There’s ups and downs in everything. I have good days, I wake up in the morning with the intention of having a great day and doing something legendary every day, it doesn’t always happen but it’s not because I don’t try. I go out there with the expectation of today being a great day and a day where we can write songs that will change people’s lives.

Quickly moving back to the UK, have you found anything that you really enjoy about being over here that’s outside of music?

My favourite thing to do is going and having a proper English breakfast, y’all know how to do breakfast! I love walking in these cities! I just got a rental car and drove across Scotland! I just like walking into a bar and talking to people. Find a local and get some background on it.

It’s funny you mention the English breakfast, when I spoke to Midland this year they’d just come from breakfast and were almost asleep from too much grease!