It’s been five long years since country music’s all-star group, Pistol Annies, released their last album, 2013’s Annie Up, to much acclaim. The three piece, consisting of some of country music’s best female vocalists in Miranda Lambert, Angeleena Presley and Ashley Monroe, all continued to pursue their solo careers and all achieved success, meaning that another album was going to be hard to achieve. With Monroe having babies, Presley falling pregnant and Lambert coming off the back of a critically acclaimed solo record, it seemed unlikely to happen in 2018… until Miranda confirmed it and Interstate Gospel was born. 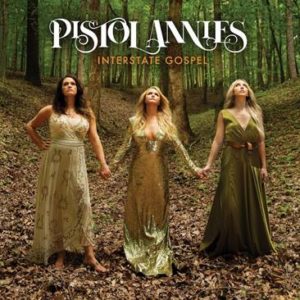 From the foot stomping, knee slapping opener that you just wished was a couple of minutes longer, Interstate Prelude, you can feel that ‘the Annies’ are back and they’re coming in hot! The great thing that you find with this group is that you can easily pick out each of their voices within the songs, this is testament to both their amazing talent and great solo work that has made us familiar.

In terms of the themes explored on the album, there are no huge surprises. The trio rely heavily on songs about doing drugs and bashing men. This isn’t a criticism, heck, it beats listening to men singing about tailgates and short shorts. Interestingly, the songs about taking drugs swing between smoking weed and taking drugs such as Percocet seem to be centered around doing it to cope, such as in Best Years of My Life. It’s a great statement on the difficulties of life posed in your 30’s from the Annies.

Throughout the record the trio trade vocals and create harmonies perfectly, showing off three of the best voices in country music. Songs like When I Was His Wife manage to skillfully blend the three together with different stories, however it’s when Miranda Lambert takes centre stage that I really feel the album take off. Cheyenne is a beautifully crafted country song that looks at a strong woman and declares “if I could treat love like Cheyenne” in a wistful and dreaming way. That being said, Monroe produces a real gut-punch on Leavers Lullaby.

If you’ve ever hurt a Pistol Annie it might be advisable to avoid this record, current single Got My Name Changed Back and When I Was His Wife are scathing commentaries on being let down by men. All in all, it’s an empowering record, Sugar Daddy is full of sass, stating things like “there ain’t a horse in Kentucky, that I couldn’t saddle up and ride”. Some people will have a problem with this, I think it’s great!

Overall, Insterstate Gospel, meets all of the expectations that had built up during the five-year wait for new music. It could potentially be difficult to bring three big stars together to make music, especially considering their varied success during their hiatus, but it’s clear these three are good friends and just love making music together. With a great balance of the rowdy, such as the title-track Interstate Gospel, and the heartfelt, Masterpiece, this is a record that ticks all of the boxes. It deserves a lot of radio play, promotion and love. Will it get it? Sadly, I think we all know the answer to that question. Get your shit together and start recognising these women country music.