You get the feeling that Kip Moore is a man of his word. When he told us earlier this year that he wanted to release an acoustic record and hit the road with a stripped-down tour, he meant it. He’s currently out on the road for four special shows in the States, including the wonderfully talented Charlie Wosham and Jillian Jacqueline on the bill. He also promised to tour the UK with his acoustic guitar… fingers crossed that’s on the cards. Keeping up with his promise however, we see Room to Spare: The Acoustic Sessions EP released. 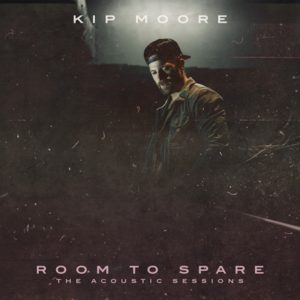 It’s nice to see Kip in a more stripped down environment. We know he’s got that rough and ready growling voice but it’s a pleasure to hear it softened and harnessed over the opening track, a tender version of Plead the Fifth. It’s a short and snappy acoustic version where you can feel the emotion oozing out.

The first of the original cuts on the album, Tennessee Boy, proves that this isn’t just an album that Kip is releasing for the sake of it. It’s a typically-Moore song in that you’ll be tapping your foot and singing along but this time, instead of a stadium, you feel like it would fit nicely by a campfire. It feels made for a good time and a singalong.

Not all of the songs are classically acoustic. Love You To The Moon, with its strong drum beat, could easily fit on any of Moore’s studio albums and includes strong electric guitar lines. We’re more stripped back here than acoustic but it still works, the song has that chilled out vibe that relies on the poetry and rhythm in the lyrics, it’s got swagger and it’s fun. Some people may recognise this song from Charlie Worsham’s recent UK tour, he co-wrote it with Kip, Natalie Hemby and Luke Dick.

It Ain’t California, co-written with Charlie Worsham and Luke Mabe, is a tribute to the late, great Tom Petty. With a few nods to the man “some learn to fly, some crash and burn”, it’s a soaring acoustic song that’s driven by layers of guitar. You could see this being performed at a songwriters show. The passion in Moore’s voice is clear, this is the beauty of these stripped back songs, you can really feel the emotion.

This album isn’t a complete departure from Moore’s recent work. Come Home With You includes that electronic beat which became part of his sound on Slowheart. It’s got the usual strong focus on lyrics and the acoustic nature of the record helps Moore show that off. The aforementioned track is a tender song about not wanting to be alone and just needing some company. For a big guy in a vest, he’s not afraid to show his heart and I love that.

Part of Growing Up is an interesting song. It’s open and raw in that Moore speaks about the struggles of trying and failing, watching dreams fall to nothing but it’s juxtaposed with those loathsome buzzwords ‘pick-up truck’ and ‘catch a buzz’. This is probably always going to be part of Moore’s vernacular but it somehow feels more honest coming from him than it does from the latest cookie-cutter pop country star.

All in all, this EP is a nice departure for Kip Moore. It puts his songs on a platform that’s a little different to what we’re used to and really shifts the focus onto his vocals and the great lyrics that he, along with some super talented co-writes, puts on paper. Moore is a man of the people, his fans wanted, begged for an acoustic record and he went and did it. He’s a rare artist who does it for the love of the game and does it his own way. He’s a long way from commercial success yet he makes it work and that’s a beautiful thing.