Midland have been on one heck of a journey over the last couple of years. Since their debut EP, they’ve had CMA and Grammy nominations, a successful album, a sold-out US tour and are about to hit stages across the UK for a nearly sold-out tour! Earlier this year, they wowed crowds at London’s O2 Arena at Country2Country Festival. There can be little doubt that their mix of a classic country sound with modern hooks has made fans fall in love with them. Last week they rocked the CMA Awards in Nashville with a rollicking cover of ‘Eastbound and Down’, we spoke to Mark Wystrach the following day to find out how it went and how the band are feeling ahead of their UK tour. 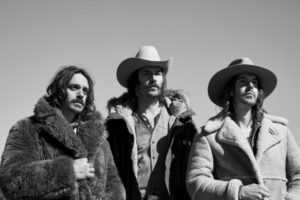 How are you doing? You’re fresh from the CMA Awards the other night, you must be feeling pretty good after that brilliant performance of ‘Eastbound and Down’?

Yeah, man. That was crazy. It was definitely one of the biggest moments in our career, we’ve been running and gunning here on the road non-stop and have had a really really busy week. We’ve kind of had to get our heads down and take it one moment at a time but once we were finished it was a combination of relief and joy, the response has been huge! We’re on our sold out Electric Rodeo tour here and we shipped off after the show on Wednesday night to Atlanta, Georgia. I can immediately notice a difference, there’s a surge in excitement of people who are getting to know us. We’re really enjoying the ride and enjoying the next couple of shows, we’re looking forward to a week off before we come to the UK!

It seems like it’s just been non-stop! I remember speak to you fresh from your C2C performance and it seems like you guys have toured relentlessly since then!

Yeah, man. You’ve got to make hay as the sun shines!

It must feel good that, after all that work, you were nominated for three CMA Awards and got to put in such a great performance on the night?

Yeah, that part is great. Getting nominated in itself is a victory but, for us, getting to perform one of our favourite songs in ‘Eastbound and Down’ is really neat, it was an absolute delight. We went in the studio a couple of weeks ago and that’s now available everywhere. We’re really proud of that, it’s great to get a release as we’re working on our second album. We can keep the fans replenished with new material.

You seem to be getting little bits out there, I love your cover of ‘Tougher Than The Rest’. My unborn baby goes wild for that in my partners stomach whenever it’s playing, you’ve got a fan in the making…

(Laughs) That’s amazing! It sounds like your baby already has impeccable taste in music! We’re really proud of that song, we all grew up such big fans of music and now we get to go into the studio and make some of these songs that helped inform our music, it’s such an honour and a joy. With records like ‘Tougher Than The Rest’ and ‘Eastbound and Down’ you really can hear the excitement of the band and myself singing these songs. When we sing that song in the UK, you’re going to hear the joy of us singing that.

The cool thing is that they don’t sound like covers, they sound like Midland songs. Is it tough to go into the studio and do that?

No, that’s the easy part! In the studio, that shit is fun! That’s when we’re creating. The thing that gets tough is travelling and being on the road away from home. When you’re doing these award shows, this week we’ve done about 12 hours of interviews. That’s kind of what we call the ‘meat grinding’ bit. When we’re in the studio and creating, that’s a pretty joyous space for us.

You mention a moment ago that you’re about to jump on the plane and head to the UK. How excited are you for your first headline tour over here?

Oh yeah, man. It’s been a crazy year but this is something we’ve been looking forward to all year. The fans are so great out there, when we were out for the C2C Festival in March, that was our first time touring outside of the States and we were really kind of shocked! We were so surprised that there was so much excitement and anticipation for us. I guess we didn’t understand that our music had already translated out there, it’s a different deal out there, you guys really do have the best fans in the world. You listen to music and you know all of the deep cuts from the album, it’s so much fun getting to share that with a different crowd.

It’s so cool from our perspective too that we get to share this mutual appreciation. Obviously you’ve sold out a few of the dates already, that must be so encouraging for you?

Yeah, man! We love the culture and the people. The pub culture is definitely something we enjoy partaking in! It’s a great way to bookend the year and welcome the holiday season! There’s so many rock and roll bands from the UK that have inspired us.

Who have your biggest British influences been over the years?

Obviously, the usual suspects such as The Beatles and The Rolling Stones have massively affected the three of us. The jangly looseness and hard-edged lyrics, plus the blueseyness is always a sound that we’re chasing. The dynamics that they had as a band, The Beatles harmonies were amazing but they were so precise and efficient as songwriters. They wrote ear-worms, incredibly beautifully constructed pop songs that had soul. When they recorded and performed them, they were so precise. We are always chasing that.

You mentioned before that you’re about to hit the studio for album number two. Do you have any idea when we might start seeing some new music?

We’ll be releasing a new single probably around February. We’ve been working on the album all year and we’re probably 80% finished. We’re getting really close to the end. I can tell you that it’s picking up where we left off with ‘On The Rocks’ and it’s an evolution. It’s beautiful man. We were so excited to share ‘On The Rocks’ and have such an amazing response but we’re kind of preparing for more because I know that this album is going to grow the band when it’s released. You know, I think it’s a continuation but I think that Jess, Cam and I have all evolved as writers and performers. Having spent a good part of the last two and a half years performing and on the road, you can’t help but… you see this with a lot of bands, either the road destroys them and you never hear from them again or they embrace it and become one with it. You know, we’ve evolved as musicians and the road really starts to shape the landscape of your life, there’s a lot of that on the next album. A lot of it is about being away and kind of rock and roll. Our lifestyle is very rock and roll these days!

Just before I let you go, for those who are heading out to see you in the UK, what would you say they can expect from a Midland show?

We’re out here on the sold-out US tour and the crowd were just absolutely ravenous, from the introduction of the band to the last song. If you’ve never seen us before, we pride ourselves on being a live band and being able to perform these songs better than on the record. We’re chasing the sound for our record to be more like our live show, that’s how we feel it’s meant to be experienced. We’re out there just having fun, every ounce of sweat that we have, we give to the audience. It’s a journey and we go on an hour and a half ride together. If you’ve never seen us before, come out and see us because we pride ourselves on being one of the best live bands in music right now! 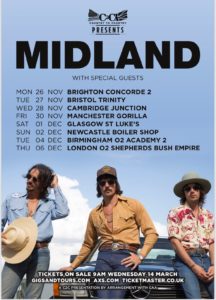