A windy November evening saw Manchester welcome Brothers Osborne back to the city after their sold out performance at the O2 Ritz earlier in the year. This time they were playing Academy 1, a larger venue and perhaps an indication of their trajectory in the UK. It’s not often you find a band that’s willing to cross the Atlantic for two UK tours within 8 months, but that’s what Brothers Osborne have given us. They clearly appreciate their UK audience enough to make the effort to come, and once they’re here they really deliver. 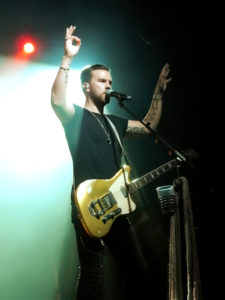 Opening the evening was Lucie Silvas. Ok, so she’s married to John Osborne, but any thoughts of nepotism on this tour are quickly dispelled. Lucie is a powerful presence on stage, delivering all the vocal range you hear on her studio work. She brought songs from her latest album, “E.G.O.”, opening with “Kite” and including “Smoking Your Weed”, “Black Jeans” and a heartfelt “I Want You All To Myself”. As if to demonstrate the broad range of influences in her music, she even included an old Jackson 5 cover (“Who’s Loving You”). She deservedly got some great support from the audience.

But of course we’ve really all paid to see the headliners, and Brothers Osborne duly took the stage to a huge roar from the crowd. They launched into “Drank Like Hank”, with John tearing into the
opening chords and TJ’s distinctive growling vocal right on point. John let rip on the Fender Telecaster for the extended solo at the end of the next up “Shoot Me Straight”, the first of a three-in-a-row reprise from “Port St Joe”. The party was well and truly started by this point, so it’s a brave band that drops a slower song in next – but it’s such a strong song that “I Don’t Remember Me (Before You)” doesn’t dampen down the atmosphere at all. It’s also one of my favourites from the album and it comes over so well in the live setting, you can feel the yearning in TJ’s delivery. Completing the triplet was “Weed, Whisky and Willie”, another great song and another slowy but it never feels like it drags – in no small part thanks to the enthusiastic crowd signing along in full voice. 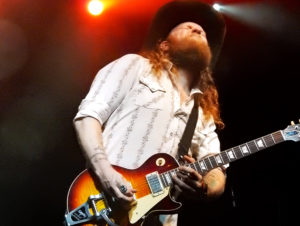 There was a short pause in proceedings after “Greener Pastures” as drummer Adam Box had a problem. He’s kicked through the kick drum! As John appealed to the audience to see if anyone had a spare kick drum in their car (!) some improvisation resulted in the show continuing for one song, the bluesy rocker “Down Home”, until a replacement kick drum was indeed found. Serendipity at play here, as some of the Brothers’ road crew used to work with the band playing next door (Between The Buried And Me) and were able to borrow their spare kit. The band celebrated the restoration of the drums with a shot of “Rum”, which had the crowd singing along to this slow and slinky number. Not that the crowd needed much encouragement, of course. “Burning Man” was duly wrested fully from Dierks Bentley and made the Brother’s own with a powerful performance.

At this point, John brought the mandolin out and brought the band into the waltz-time “Tequila Again”, another favourite of mine from Port St Joe. In fact, it’s a favourite for a lot of people, if the crowd singing and swaying was anything to go by. The tale of a lost love in “21 Summer”, from the duo’s first album “Pawn Shop”, is another crowd favourite, and like everything they played it got a great reception. A rousing, gritty rendition of Steve Earle’s “Copperhead Road” changed the tone a little, as only songs about dead relatives and Vietnam can do, but it’s a great song with that mandolin prominent again . 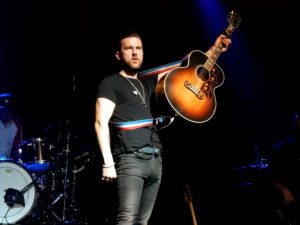 The breakout hit “Stay A Little Longer” brought us back to a comparatively lighter lyrical place as John swapped the mandolin for the Telecaster. The thing you notice about John’s playing is that he doesn’t waste anything – he’s not flashy in his style, he never loses the band, he clearly enjoys what he’s doing but he’s never over the top or self-indulgent in his soloing. He just plays in a way that fits so naturally with the song yet still enthrals and takes the audience with him. He’s a mighty, mighty player and so essential to what he and TJ create, in a way you can only really appreciate when you see them live. TJ’s baritone voice is at times silky smooth, at times rough and gritty as the song demands. So distinctive.

The main set was brought to a close by a stomping performance of “It Ain’t My Fault”. Actually, can it be played any other way than stomping? It’s a great closer, and the band left the stage as the crowd continued the chant that’s so prominent in the song. The chant was still loud and proud when the band eventually returned for the encore, beginning with the almost jokey sound of “A Couple Wrongs Makin’ It Alright”. There was a bit of a 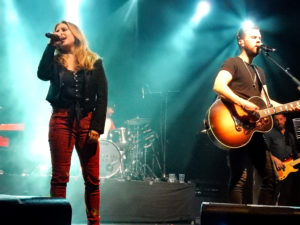 pause here as TJ was made aware of the time (there was an 11pm curfew). 12 minutes left – can they fit in 3 quick ones, or 2 longer ones? After what seemed like an age, with guitarist Jason Graumlich John tapping his watch, they lifted the shutters on the “Pawn Shop” with John playing a bluesy slide guitar. They then welcomed Lucie Silvas back onto the stage, and she took the place of Lee Ann Womack on the moving “Loving Me Back”. Some big shoes to fill there, but Lucie does a fantastic job on this song in tribute to the life of the live musician. They round it all up with the John Denver classic “Country Roads (Take Me Home)”, with the massed choir of the crowd in full flow.

By now, the curfew has passed and the show was over. Definitely one of the best gigs of the year for me, these guys are building a great songbook and they certainly know how to present it on- stage and get the crowd on-side from the off. I’m sure I’m not the only one who’ll be eagerly looking forward to their next trip over here. As the audience dispersed it was clear that everyone had had a damn good time, and no-one should feel guilty about that.

SETLIST
Drank Like Hank
Shoot Me Straight
I Don’t Remember Me (Before You)
Weed, Whiskey And Willie
Greener Pastures
Down Home
Rum
Burning Man
Tequila Again
21 Summer
Copperhead Road
Stay A Little Longer
It Ain’t My Fault
A Couple Wrongs Makin’ It Alright
Pawn Shop
Loving Me Back (with Lucie Silvas)