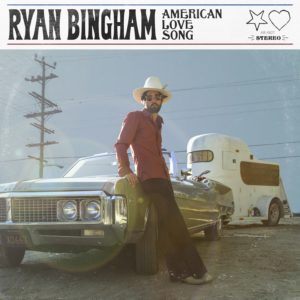 Ryan Bingham’s first new LP in four years, AMERICAN LOVE SONG,finds one of American Music’s most distinct voices, honing in on both the personal and the cultural on songs such as the rocking “Jingle and Go” and the stripped down, acoustic “Wolves,”which deals with the painful memories of his youth. But it’s also a sympathetic response to the high school students turned gun-control activists, in the wake of the school shooting in Parkland, Florida, contending with men and women questioning their integrity on social media. Throughout the album, Bingham combines autobiographical reflection with a bittersweet celebration of the collective American spirit in the face of enduring difficulties.

Ryan – who is currently on a completely sold out solo acoustic tour in the US – will tour Europe in 2019, first solo acoustic, including a date at the Union Chapel April 26th  and later with his full band to play a string of festivals in June.

Bingham never really set out to be a musician. He grew up in New Mexico and Texas, riding bulls on the local rodeo circuit.  His mother bought him a guitar when he was 16 years old, and a neighbor taught him a mariachi tune. When he grew tired of playing the only song he knew, Bingham began penning his own music, discovering the writing process to be a therapeutic coping mechanism for dealing with the tumultuousness of his upbringing. His first performances were informal affairs in the backseats of cars with friends on the way to rodeos, where he was competing professionally on the weekends. Before he knew it, he had more gigs playing guitar than riding bulls.

After making his recording debut on Lost Highway Records (UMG) and touring hard across the US on his first couple of albums, Bingham was actually in the back of a van in North Dakota when he wrote ‘The Weary Kind,’ a song that became the centerpiece of the 2010 film ‘Crazy Heart’ starring Jeff Bridges. It earned him an Academy Award, a Golden Globe, and a Grammy, and skyrocketed him into the spotlight. Amidst the incredible success, though, he was also dealing with the tragic deaths of his mother, an alcoholic, and his father, who took his own life.

The losses put Bingham in a dark tunnel, and it took a while to crawl his way out. With the help of his wife, Anna Axster, and some inner soul-searching, Bingham has come back into the light. “American Love Song,” the third studio album from the Axster-Bingham indie label (after 2012’s “Tomorrowland” and 2015’s “Fear and Saturday Night”), takes all his influences – both musical and experiential – and unites them in Ryan Bingham’s best, most fully realized record to date.

Ryan Bingham will play a solo acoustic tour in Europe this spring (dates below) and will return in the summer with his full band to play Black Deer Festival.  More dates to follow.