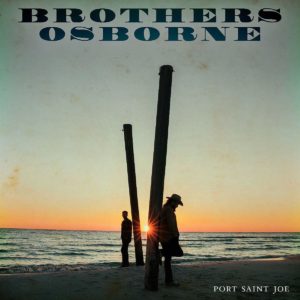 2018 saw the release of Brothers Osborne’s sophomore Album Port Saint Joe. Pawn Shop had been my go-to listen of 2017 and to be honest, I had no idea how any new album could measure up against it. I shouldn’t have worried.

From the very first guitar lick of “I Don’t Remember Me (Before You)”all the way through until the album signs off with “While You Still Can”, TJ’s unique baritone vocals and Jon’s guitar genius drive the album on, with each song blending flawlessly into the next with the music continuing without pause. This provides a somewhat unique listening experience and I found that by kicking back, closing my eyes and immersing fully in the music, I was transported to the Floridian Costal Town that gave the album its name. I swear I could almost feel the sun on my face and smell the sea air. This is an album that needs to be listened to from start to finish. There isn’t a weak track on it and only by hearing it in its entirety can this masterpiece be fully appreciated.

I bought this album on vinyl and in my opinion, there is no better format. The artwork on the sleeve is beautiful and the sound absolutely perfectly replicated from the studio.

Port Saint Joe gets a 10 out of 10 from me and proves that the Brothers 2018 CMA award for duo of the year was well deserved. There are surely many more awards and plaudits to follow. I cannot wait to see what comes next for the Brothers and if Port Saint Joe is anything to go by, we certainly won’t be disappointed.

Sometimes everything just clicks. The artists have a 10 out of 10 performance, the crowd are completely engaged, the venue is spot on and the atmosphere sews everything together into a patchwork quilt of perfection. It doesn’t happen often, but when it does it is something very special.

The support act for the evening was the fantastically talented Ashley McBryde who took to the stage with only her trusty Gibson guitar and a self – confessed “terrible chest cold”. As she kicked off the set with “Rattlesnake Preacher” any doubts that this would affect her completely disappeared as her powerful vocal was flawless. Ashley commanded the stage and connected completely with the crowd who were more than happy to sing along and show their appreciation. The highlight of her set was a stunning performance of “Bible and a 44” where there truly wasn’t a dry eye in the house.

Next to take the stage was the evenings headliner and this years’ CMA newcomer of the year, Mr. Luke Combs. I had listened to a lot of Luke’s material over the past few months and was expecting him to be very good but I wasn’t expecting perfection which is exactly what we all received.

Starting his show with the now trademark explosion of Jack & Coke from his red solo cup Luke barreled into the as yet unreleased “Beer never broke my heart” The tone for the evening was set when most of the audience sang every word back at him with equal gusto.

I can give no greater compliment than expressing how the next 2 hours absolutely flew by leaving me completely emotionally drained with a voice that stayed hoarse for days. Rarely have I heard a crowd and an artist engage quite so much however it felt like everyone knew every word to every song and it seemed like Luke and the band were feeding off the atmosphere and having as good a time as we were.

Pulling mainly from his “This One’s for You” Album alongside some clever covers, Luke and the band delivered stellar performances with the high energy hit “When it Rains it Pours” almost taking the roof off.

At the conclusion, Luke and the band came down from the stage hugging ang high fiving all that were lucky enough to be at the front. Autographs were signed, Jack Daniels was drunk and everyone went home very very happy.

We were spoiled with many fantastic Country Gigs in 2018 but Luke and the Boys came out on top and if this show was anything to go by, that is exactly where they will stay. 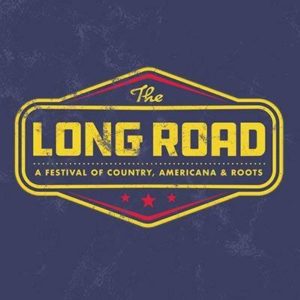 2018 brought us the inaugural Long Road Festival in the beautiful town of Lutterworth in Leicestershire. Billed as a celebration of Country, Roots and Americana, it promised an amazing weekend of music in a fun family friendly atmosphere and boy did it deliver!

From the fantastic “Welcome to Long Road” sign through to the perfect reproductions of downtown Nashville buildings, you could tell that no stone had been left unturned to ensure the setting for the festival was every bit as memorable as the music. Artisan food choices, wellness experiences and lake swimming blended seamlessly with the 4 music stages ensuring there really was something for everyone. A special mention must go to the staff at the children’s’ area “Little Possum County” who ensured even the youngest festival attendees had an amazing time.

For a first-year festival the lineup was terrific and even the late cancellation of Carrie Underwood due to illness was more than made up for by the wealth of talent on show.

Brent Cobb, Joshua Hedley and Folk Soul Revival were some of my favourite acts of the weekend however I could hand on heart say I never seen one bad set. There was music that sat outside my preferred styles of Country, but the festival atmosphere (and the beer) ensured that I not only experienced, but enjoyed new sounds and styles of music I’d normally never listen to.

The decision to move Aaron Watson up the bill to headline the Saturday night was completely vindicated with the Texan artist playing a blistering two-hour set, turning the Leicestershire field into a Texan Rodeo for the evening. His genuine enthusiasm coupled with an amazing band playing a setlist drawn mostly from the excellent Vaquero album ensured a night to enjoy and a performance that will live long in my memory.

Yes, there were a few first-year niggles and some things to be ironed out before 2019 however none big enough to specifically address or detract at all from the enjoyment of the weekend. Next year’s tickets have already been purchased and if the weekend is anywhere as good as this year was, it will be an absolute cracker.

My stand out new artist of 2018 is the 24 year old Canadian singer songwriter Tenille Townes. The Alberta native may be diminutive in stature, but with powerful emotive vocals and beautifully crafted lyrics, it is certain that massive things lie ahead.

Townes is not an absolute newcomer per se having had some success previously on the Canadian Country scene however this year seen her big breakthrough in Nashville.

2018 saw Tenille signed to the Columbia Nashville label and the subsequent launch of her EP “Living Room Worktapes”. This deliberately raw and stripped back acoustic recording showcases her beautiful vocals and fantastic songwriting talent with the stand out tracks being the heart wrenching ballads “Somebody’s Daughter “and “Jersey on the wall”.

The EP was critically acclaimed with “Somebody’s Daughter” making it onto many Country Music Radio playlists and led to Tenille opening for Miranda Lambert and Little Big Town on all dates of their Co-headlining “Bandwagon Tour”.

2018 also saw Tenielle’s first foray into Europe playing at the CMA Songwriters Series in Glasgow, Liverpool, Gateshead, Manchester and London. Playing alongside Chris DeStefano, Ashley Campbell and Kassi Ashton, Tenille more than held her own. Standing to sing in her signature low slung guitar stance, she had the audiences rocking out and drying their tears in equal measures.

Look out for big things from Tenille Townes in 2019. A support slot on Dierks Bentley’s “Burning Man” Tour and Jay Joyce produced full length debut album is hopefully just for starters. Fingers crossed she will also make it back over to the UK. If she does, don’t miss it! 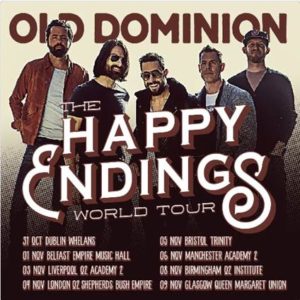 Sometimes a song just comes along at the right time in your life and the lyrics and melody connect exactly with what you are feeling and what you need at that exact moment. Old Dominion’s “No Such Thing As a Broken Heart” had done just that for me, coming at a time when I needed to hear the message of living for today like there might be to tomorrow. If it was possible to wear out a Spotify track by overplaying, I might have done just that.

Fast forward to November 2018 and I was in the Queen Margaret University Union in Glasgow, surrounded by friends and family, watching Old Dominion play to a capacity crowd of only 900 lucky individuals. The band were on point playing a sensational set when Lead Vocalist Matthew Ramsay addressed the audience informing us of a mass shooting 2 nights previously at a Country Music event in Los Angeles where 12 people had tragically been killed. People doing exactly what we were that night, torn down by senseless violence. The room was silent as Ramsay, clearly emotional, dedicated the next song and asked us to sing along so loud that LA would hear us and project so much love they might feel it.

For the next 4 minutes, every person in that room, from Matthew Ramsay to the venue Security staff sung “No Such Thing As a Broken Heart” with as much volume, emotion and love as we could muster. Those that didn’t know all of the words made them up, strangers held hands, tears were shed and together we paid tribute to those who had so tragically lost their lives. Country music fans uniting to show that love will always overcome hatred.

I will never forget the feeling I had as the song faded to a close and I hugged my wife. Without doubt my memorable moment of 2018.