Album of the year 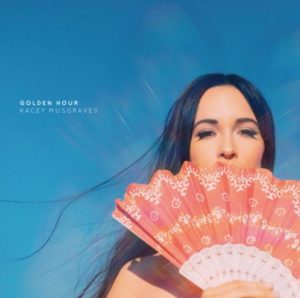 My album of the year is one I haven’t stopped playing all year – in fact, I’m listening to it as I write this piece. It’s been quite a divisive album, which is understandable given the creative direction chosen by the artist in question. Taken as a whole, it’s neither traditional country, nor pop country, but it does contain influences of both (and other styles too). What it is, is a beautifully crafted collection of songs that communicate the place where the artist is “at” emotionally, but without becoming overly syrupy and saccharine loaded. My album of the year for 2018 is “Golden Hour” by Kacey Musgraves.

For me, if a song takes you to some other place, whether it’s a place you remember visiting previously or somewhereimaginary you can visualise through the words and music presented, then that’s a job well done. All 13 songs on “Golden Hour” do that for me, and that’s not something I find very often. Sure, it probably helps that much of the lyrics have a little bit of a trippy feel to them at times, but the musical arrangement of each track creates the broader landscape even before the words arrive to draw out the detail. You get the feeling that it’s all been very deliberately thought out that way, and it all works together so well.

Of course, it’s no good being able to “paint” like this if the songs themselves aren’t essentially accessible. “Golden Hour” is full of engaging melodies and lyrics that most can identify with on some level. The arrangements are creative but often brilliantly simple, and it’s the little details that shine. The banjo line played at the end of the chorus in “Oh What A World”, for example, completely lifts that song to another level for me.

Kacey sounds terrific and sings with heart and feeling, while the assembled band flesh out her vision into something quite beautiful to these ears. It’s no wonder the award nominations have been arriving as the year draws towards its close. 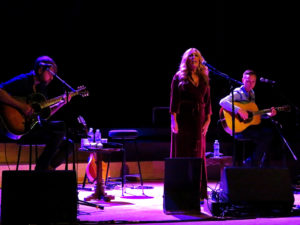 I don’t know about you, but there’s just something about a female voice singing country music that’s just….right!I don’t really know how else to describe it. So although I’ve seen some great gigs this year from the likes of Brothers Osborne, Luke Combs and Sam Outlaw, I’m looking to the ladies for my best live show of the year. And one in particular stood out for me.

Lee Ann Womack played the Royal Northern College of Music in September. It’s a great venue for really listening to live music, with fantastic acoustics. Lee Ann occupied the stage with two sidemen, and together they held the room transfixed. She started with Buddy Miller’s “Does My Ring Burn Your Finger”, and that really set the tone for much of the evening. The set covered her range of album releases, not just the most recent “The Lonely, The Lonesome & The Gone” (which is excellent, by the way), and also included another Buddy Miller cover (“Don’t Listen To The Wind”) along with Lefty Frizzell  (“Long Black Veil”), George Jones (“You’re Still On My Mind”) and closing with Don Williams’ “Lord, I Hope This Day Is Good”. When you’ve got someone with a voice like Lee Ann Womack presenting songs of this quality and in this stripped down format, it just makes the hairs stand up on the back of my neck. Absolutely spellbinding, and no words I’m able to conjure could convey that accurately in any further detail. You just had to be there. Add to that a support set from Charlie Worsham that superbly showcased his high quality guitar playing, and it all added up to a simply superb night. 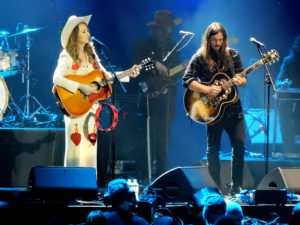 Confession time. I only went to 2 festivals this year (shame on me!). So it’s a narrow field I’m choosing from.

I’m going with C2C as my favourite festival of 2018. It was my first time there, and an unforgettable experience. Just the whole breadth and depth of artists appearing in the various venues was fantastic. My highlights from the mainstage were, in no particular order, Luke Combs, Kacey Musgraves, Midland and Little Big Town. But C2C is about so much more than the big arena. There were great sets in the outer venues from the likes of The Wandering Hearts, Lindsay Ell, Ashley McBryde, Mo Pitney, Ashley Campbell, Peter Donegan, Una Healy, Brett Young, Lukas Nelson… I could go on and on!

Away from the music, there’s a range of food and drink options specifically in place for the festival, as well as all the regular restaurants and cafés around the O2, so you’re never short of choice. There’s also a good number of traders selling all the country-related paraphernalia you could think of.

There’s such a great vibe at C2C. Everyone is so friendly, everyone is there to have a good time and if you’re on your own and don’t want to be then you won’t be for long. It can be 3 very long days if you’re in for the aftershow parties, but it’s so much fun you don’t really feel it until you’re on your way home on Monday. It’s just a great weekend, and it’s now less than 3 months to C2C 2019! 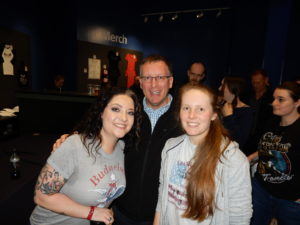 Ok, I’m going to treat this as “new to me” as I’m aware some people may have come across this artist prior to 2018. I think this will be marked as her breakthrough year, especially in the UK.

I saw Ashley McBryde in the Indigo at C2C in March. The set at the Indigo was in advance of her first album, “Girl Going Nowhere”, and included a number of songs from that album as well as from her earlier EP, “Jalopies And Expensive Guitars”. It can be a little vulnerable for an artist to perform completely solo, with no band as support, but McBryde was quickly into her stride and formed an easy rapport with the eager crowd. She has some pretty personal material, but she was just as comfortable relating the stories behind the songs as she was in performing them. It was an excellent set and fully justified the buzz around the venue before she took the stage.

Since then, her “Girl Going Nowhere” has received a lot of acclaim and she returned to the UK in the autumn to tour with Luke Combs, she’s appeared on national TV on “Later…with Jools Holland” and she also pulled in her first headline show in the UK. 2019 will see her back at C2C, this time on main stage. The great thing about her is that she’s no overnight success. She’s worked long and hard to get to where she is today, but now it’s all heading in the right direction for Ashley McBryde.

Ah, so many highlights this year. I’m really not sure I can pick out one single moment. I’ve been to some great gigs, met some great people, discovered new artists and new music, and generally had a brilliant year with music. I’d be sad that 2018 was drawing to a close, were it not for the fact that 2019 already has so much promise!