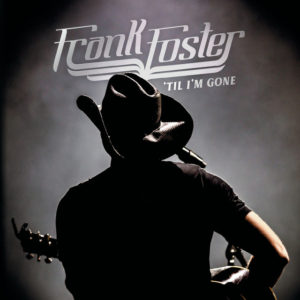 Frank Foster is maybe not so well known in the UK. He’s an independent artist in the fullest sense. Having started his recording career on his own he’s rejected offers from record labels to continue as his own pilot. He launched his own record label and publishing company, and acts as his own agent and management. He writes all his own material to keep it real and honest. “‘Til I’m Gone” is his 7thstudio album, and he shares the production credits on it, too. As with his earlier releases, the songs on this album show a mix of influences including southern rock, blues and honky tonk. It’s not for no reason that he namechecks Waylon Jennings, George Jones, Hank Williams and John Mellencamp at various points – you can hear all those influences and more in his songwriting and performances. Having said that, he’s definitely his own man.

The opening track, which is also the title track, begins with a strong and simple guitar riff joined by a solid drum beat, with a lyric looking with affection to the “old stomping grounds where I grew up on where my soul belongs ‘til the good Lord calls me home, then I’m gone”. It’s a strong opener, and one of many songs on the album that you can imagine would go down a storm when played live. The anthemic, rocking mood continues through the up-tempo “Something ‘Bout Being Free”, with it’s occasional jangly (you might spot a bit of Hammond-style organ in the mix) and “#3 Sticker” (a reference to Nascar legend Dale Earnhardt, known for racing in car number 3); all three are songs you’d happily play loud on an in-car playlist.

Foster slips into a more honky-tonk vibe for “Homebody Ramblin’ Man Blues”, and “Playin’ For Drinks” is about an old-time Country singer/songwriter who’s out of step with the Nashville scene and so is quite contentedly playing the honky-tonks for a living.  He then gets positively funky in praise of authenticity on “About The Beer” where, as he rightly says, “it ain’t about the brand, it’s about the beer”.

“Beer Drinkin’ Buddies” and “This Evenin’” slow down the tempo as the album begins its heads towards its end. “Age” is a short reflective piece, with just Foster’s voice and an acoustic guitar ruminating with God on a life lived and how He’s “shown my soul a little wisdom as I gained a little age”. Album closer “In The Wind” finds Foster remembering loved ones lost, and drifting through life “with my thumb out in the wind”. It’s quite a “down”, sorrow-tinged track to end an album with, but it is a good track nonetheless.

I think this album is exactly what Frank Foster wanted it to be. It’s genuine, straightforward, blue collar, Southern Rock based Country music – no pretension, no artifice, no self-serving instrumental breaks, no stylistic quirks or ticks. Lyrically, it’s loaded with reflection and reminiscing, although it also has its more euphoric and celebratory moments. You get the impression that it represents Foster himself to a tee – and what artist wouldn’t want that?

Something ‘Bout Being Free, Age, In The Wind