Drake White Exclusive Interview Part Two: Ahead of His Shows at C2C, Drake Talks About His Fans, Writing Songs and More!

This weekend, Drake White has been taking to the stage at the start of a three-month tour with his new-look Big Fire band. All the reactions we’ve seen so far have been hugely positive and, when we spoke to Drake just a few days beforehand, he was certainly in an upbeat mood. Here, in the second part of his exclusive interview with Six Shooter Country, he talks more about his music, his songwriting inspirations and why he wishes he could sit down with Hank Williams Senior. 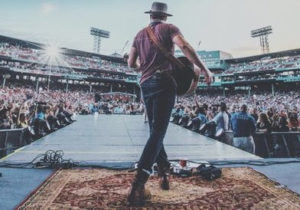 Drake, we’ve already touched on the fact you’re halfway through recording a new album, what more can you tell us about the direction you’re taking?

I really wanna do something wild, I really wanna do something that just enthuses, you know, and different. My creative state right now is very experimental, I’m just trying to get out there and keep to my roots, I’m not saying I’m going to go off and do an EDM record, I’m just saying I want to explore those roots and give people something they can sink their teeth into. I think this is going to be the best record we’ve ever had for sure.

Spark was out of this world so if you think you can better that, it is going to be amazing

It’s great to hear you are writing almost every day. What’s the weirdest place you’ve ever sat down and written a song, where have you been struck with the most unusual inspiration?

(Big intake of breath while Drake thought about this one) Well, the one thing that I did, I heard that Neil Young did this a while back, is that every time he gets an idea for a song he feels an obligation to leave what he is doing and go chase after that song, to go chase after that melody or whatever, and so you know with a phone, I can say ‘oh, I got an idea, here’s the idea’, and I can chase after it. I don’t think there’s anywhere I haven’t written a song, whether it be the lawnmower, the park, on a train, on a plane. I’ve definitely written songs when I’m sitting supposed to be paying attention to something else, like an awards show, or a ceremony, or a wedding.

I hope it wasn’t your wedding, you didn’t turn round to Alex and say ‘no, hang on a minute, I just have to write that down’?

Tell me more about the fans, you do a lot of stuff with them on social media, you have your Firestarter Family, you do your Freestyle Fridays. It’s obviously changed a lot in the last 10 years or so, now you can interact with your fans on a daily basis, literally every minute if you wanted to. What does that mean to you, because you see the good stuff and obviously you see the not so good stuff as well?

It means that we have to establish a balance. Like I absolutely love the fact I can communicate with the fans at any point and any time during the day that I want to, but that balance is like quality. I’m not a natural at social media, I’m not going to sit there and hold the phone in my hand all the time. I want to be writing songs, be out there in nature, watching the birds fly and listening to the things around me and stuff like that.

It’s a unique thing that we’re going to have to be careful with moving forward, it’s a great thing and keeping it balanced, I think sociologically and mentally, we have to understand that it’s OK for get off your damn phone, you know, for a period of time each day.

Me and my wife, when I’m at home, 7.30-8 o’clock, we knock those phones off and we’re together, we’re drinking a glass of wine, petting the dogs, watching Game of Thrones, and just hanging out. There’s no phones associated with that, they’re like at the door, they’re turned off.

But you know, for me to be able to jump on and say ‘hey guys I cannot wait to come to the O2 arena in March with my buddy Chris Stapleton, Lyle Lovett and Ashley McBryde’, that’s awesome. It’s just like beer – I love beer and I drink beer most days, but if I sat here and drank beer all the time, all day every day, then I would become a miserable person.

I’m guessing you don’t mean the warm beer like we have over here.

And I hear you also like a good English breakfast?

Oh, that is the best, it’s the first thing I’ll get when I come over there.

So, if you could have a pie and a pint – or maybe a beer and a burger – with some of the country greats, past or present, who would you sit down with?

So, we have a lot to look forward to obviously. The response when we said we were doing an exclusive interview with you was phenomenal and everybody is so much looking forward to seeing you, I know I certainly am. If you do some other gigs as well, please, please keep us in the loop here at Six Shooter. Thank you so much, love to Alex, have an amazing time out on the road and thank you again.

Will do and thank you so much.

You Can Read Part One of The Interview Here.

Drake Heads to The UK to Play C2C Festival in March. Tickets are Available Here.