Ahead of Their Debut Performance at Country2Country Festival in London, We Chat to James Barker Band!

Each year we’ve come to expect a star-studded lineup at Country2Country Festival, with some of the biggest names in country music hitting the stage at the O2 Arena in London (as well as Dublin, Glasgow and beyond!). We’ve also come to expect an amazing array of talent playing the satellite stages at the festival, giving us a great chance to catch other big artists close up and get acquainted with new talent from the UK and across the pond.

This year’s line-up sees Canadian country stars James Barker Band play a part on the satellite stages, giving them their first taste of the UK crowds. We recently chatted with the band about their upcoming shows in the UK and the follow-up to their 2017 album ‘Game On‘. 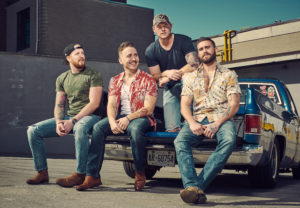 You’ve recently been announced for C2C Festival in London. How excited are you for that?

We’re super excited to finally be playing C2C! We’ve had our sights set on this festival for a few years, so it’s definitely a bucket lister for us!

Have you wanted to come to the UK/Europe for a while?

None of us have been to the UK or Europe before, but we’ve all dreamed about it for years. It’s almost worked as a bit of an excuse for us to take a vacation! We’ve all booked off a couple of weeks before and after the shows to go and soak up the sights and sounds!

Had you heard of Country2Country before this year?

We’ve been hearing great things about C2C for years now! We have a lot of good friends in the industry that have played over the years.

Country and Americana music is gaining popularity at breakneck speed in the UK. How aware are you of this?

We are aware of this! It’s really cool to see our kind of music blowing up all over the world. Country music is all about the party and, as with most parties, the more the merrier!

You guys come from Canada. Is there a big country scene there?

Country is HUGE in Canada! I think it’s probably the second largest genre of music, second only to pop. When a big country act comes to any major city in Canada they have no problem selling out the big stadiums!

Breaking the USA has been a priority of ours for a couple of years now. It’s the motherland of country music and it’s a massive country. It’s crazy to tour the States and see how big country music is. It’s part of the culture.

Are the two scenes quite separate or is there a lot of crossover between Nashville and Canada?

There is a bit of crossover for sure but it’s usually from Nashville to Canada. It’s pretty rare to see a Canadian act penetrate the Nashville scene, but we’re hoping to change that!

For those who don’t yet know James Barker Band, what can they expect from your shows at C2C?

They can expect a fun, high energy show! We really have a fun time when we’re on stage and we really want the fans to do the same. We want everyone to leave our shows with a smile on their face!

How would you describe your sound?

We definitely have a more progressive country sound. We draw inspiration from all genres and I think that shows in our music. We have clear rock and pop influences to our music, but the lyrics are always rooted in a country direction.

Who have been the biggest influences on your music?

Like I said before, we have a pretty extensive list of influences in all genres, but to name a few: George Strait, Eric Church, Red Hot Chilli Pepper, Arctic Monkeys, The Beatles, Eminem, Kendrick Lamar, Keith Urban… basically everything!

Your new single ‘Keep It Simple’ is out now. Tell us about where that song came from?

This was a really fun one to write. We basically started with a guitar progression, it’s got a really good groove to it. Then we landed on the title and really tried to do just what the song says, ‘keep it simple’. It’s all about staying in on a Friday night with your girl or guy!

It’s your first new music since the 2017 album ‘Game On’. Can we expect to see more new music this year?

It feels like forever since we released an album but we’re really excited to say we’re going to have one out this spring! We’ve got a dropbox full of songs right now that we really love. Now we just need to pick the ones that will make the cut!

Whilst you’re over in London, is there anything outside the music that you’re looking forward to doing?

All being well, can we expect the UK to become a regular touring spot for you guys?

I really hope so! It seems like an amazing place and we’d love to make it a regular touring spot on our schedule in the future!!!

Their current single ‘Keep It Simple’ is available now! Buy it on iTunes here! Or you can watch the video here…