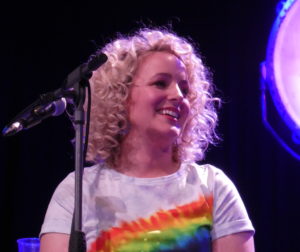 To be at the CMA Songwriters evening on Thursday was like gatecrashing a party of old friends who hadn’t seen each other for a while.

Hosted by Cam, whose star shone as brightly as the sequins on her skirt, the music took the audience through the highs and lows of emotion, with a raucous dose of politics, jokes and a drinking game challenge.

Joining Cam on stage were Laura Veltz, Ross Copperman, Travis Denning and Jimmie Allen, all masters of their craft.

Opening up with all time favourite ‘Diane’, Cam set the scene in style and during the evening the beauty of clarity of her voice just soared as she pulled at the heartstrings in a way that only Cam can do.

From Palace, a song she co-wrote with and for Sam Smith, to ‘My Mistake’ – no guessing that that was about a broken love affair – to a new song from her next album, called ‘Forgetting You When I’m Alone’, co-written with Lori McKenna, about how thoughts of a long lost love creep back into your mind when you’re alone. 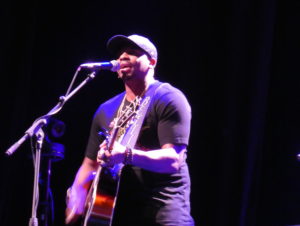 While to those who don’t follow the writers quite so closely, the name Laura Veltz may be less well known, her first number ‘Drunk Last Night’, co-written with Josh Osborne and recorded by the Eli Young Band, proved a powerful introduction.

Through the evening Laura’s repertoire was more like a greatest hits album as she played and sang her songs, including Maren Morris’ hit ‘Rich’ (originally going to be called Rich Bitch) and yes, Laura did sing the ‘ker-ching, ker-ching’, through to what she calls her ‘pension song’, also known as Dan + Shay mega hit ‘Speechless’.

Given that two years ago Travis Denning was in the Songwriters’ audience, he didn’t let the occasion get the better of him. “I never thought I would come to London and sing my songs,” he told the packed out crowd, to loud cheers.

Starting the evening with his latest single ‘After A Few’, he talked of growing up as a heavy metal fan – think Metallica and AC/DC – before debuting new song ‘Snakes and Needles’, co-written with Devin Dawson. Louder, rockier and altogether grittier, complete with rattlesnakes and rusty tattoo guns, it proved a complete contrast to the poppy fake ID ‘David Ashley Parker Song’ that he chose to end with.

Songwriter Ross Copperman, who lived in the UK for two years and was returning after a decade away, told the audience he didn’t know there were so many country music fans in the UK – where has he been???

We forgave him though as he launched into ‘Setting the World on Fire’, the massive hit co-written with Matt Jenkins and Josh Osborne for Kenny Chesney and Pink.

Ross was clearly chuffed to be on stage, entertaining us with tales of his visit to Parliament the day before with Cam and his wife – he says he put in a good word for us about Brexit – and later venturing into politics and pilgrims. 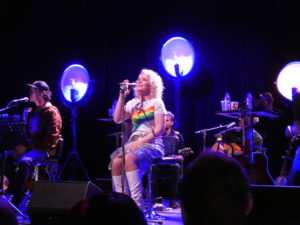 A hilarious version of his song ‘John Cougar, John Deere, John 3:16’, was reworked for the UK crowd who replaced them with John Cleese, Elton John and John Lennon – with Mary Poppins added for good measure by Jimmie Allen.

A surprise for the night was when Cam called on stage Ward Thomas to present them with a special CMA award for overseas artists, Catherine and Lizzy seemed genuinely humbled and stepped up to sing their hit ‘Cartwheels’, as Jimmie took out his phone to capture the moment.

Jimmie certainly wowed the crowd, the banter between him and Travis creating a magical moments atmosphere, even when he did challenge Travis to the Smirnoff Ice drinking game (accepted) just before one of his spots.

Starting off with ‘American Heartbreaker’, Jimmie’s sense of humour, willingness to take the mickey out of himself (we can get away with that, he’s a huge Disney fan), endeared him to the crowd even more, especially when he talked about having to pour himself into his jeans after a visit to Five Guys. 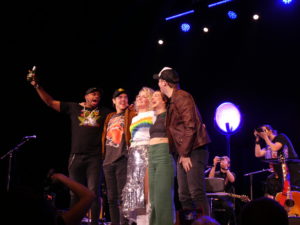 His beautiful song ‘Warrior’, written for his grandmother, came with a touching tale of why he carries her scarf in his back pocket as a lucky charm.

Finishing with ‘Best Shot’, his historic number one debut single, he was both hilarious and humble and there was probably ever a truer word than when he summed up the evening by saying: “As artists and songwriters, we travel so much we don’t see each other so often, and when we do, it’s just great to hang out, play music and tell jokes.”

And to show just how much he wanted to share that love with everyone, he broke off mid-song and reappeared minutes later in the upper seating, fist pumping, shaking hands and giving out hugs – the atmosphere was electric.

It was however, down to Cam to put an all too soon ending on proceedings and she chose ‘Burning House’, almost bringing the house down as everyone was on their feet, phone torches held aloft for one fabulous final sing along, again and again for that chorus!