Lainey Wilson Interview: We Catch Up With Lainey During an Action-Packed C2C Weekend

Lainey Wilson wowed the crowds who caught her at CMW last year in London, and she was back in the UK to play C2C Country To Country at the O2. One of the brightest talents to emerge from Louisiana in recent years, she signed a recording deal with Broken Bow Records last year and now counts Jason Aldean, Chase Rice and Dustin Lynch as labelmates. I was pleased to catch up with her on the Saturday at C2C for a chat covering things like her style, recording her forthcoming album, and her overall attitude to life. 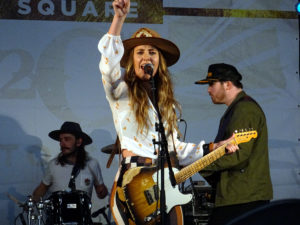 Welcome back to the UK, Lainey

You were over here in the UK for Country Music Week in October last year, I know it went really well for the fans who saw you then but how did it go for you? Did it meet your expectations? Did you have any expectations before you came?

It was way more than I could ever have imagined, to be honest with you. I played a few shows last October for CMW, and I couldn’t get back here fast enough. It was unbelievable.

Did you get much opportunity to explore the area while you were here last time?

I did get to go to Abbey Road, stuff like that. This is my second time here and I still haven’t seen, like, Buckingham Palace or anything. We’re just trying to rest when we can and go to the next thing.

Confession – I’ve never been to Buckingham Palace either.

In between times, you’ve been touring the US with Morgan Wallen. That must have been quite a time?

Yes, I have. Oh my gosh, he is a good time! I started travelling with him at the beginning of January and I actually jumped off the tour to come to London, so I let someone else take my spot on that tour, but it has been a good time. I think Morgan Wallen is just a good time. I mean, you can look at his hair and tell, he’s got the mullet going on, he’s a good guy. They took me under their wing and really, you know, supported me. It was awesome.

You’re from a very small town in Louisiana, roughly 300 population?

Yes, probably less than that.

Yes, probably. Yes, it’s a tiny town in North East Louisiana, call Baskin. About 30 miles south of Monroe, I don’t know if you’ve ever heard of Monroe. Probably most of them are my family members. It’s a farming community, no stop light, so coming to somewhere like London is pretty crazy to me but I love it.

How easy, or difficult, was it for you to find places to play your music, back home in Baskin?

I definitely had to travel, go out of Baskin to find places to play. Monroe is about 30 miles away, and that’s where I could play most of my shows. Sometimes I would have to travel to different states. Mississippi, Arkansas, they call it the Ark-La-Mis area, so you’d have to drive a little ways to find different places to play. Even the WalMart or the grocery stores were a little ways away, you just had to get in your vehicle and drive to really do anything.

So you were playing those sorts of shopping centres, and anywhere just to get your music out?

Yes, that’s right. I’d play nursing homes, fairs, festivals – anything. My mum, just in front of our friends, she used to say, “Hey Lainey, sing ‘em that new song you just wrote”, and I’d have to sing it right there in the middle of the grocery store!

You spent some time working with another Louisiana native, Frank Foster. What was that like?

Awesome. He and his wife also took me under their wing, they let me go on the road with them for a couple of years and kind of accumulate his fan base. From the beginning he told me, “We just want this to be a stepping stone for you, and kinda help you get to whatever that next step is”, and that’s exactly what it did. It served its purpose and I’m forever grateful for them.

He’s a very independent artist, isn’t he? He must have been able to show you quite a lot?

Yeah, I learned a lot, I did. We got to go all over the place, I’d just jump on the bus with them, we’d head to the next place ‘cos most of the time I was acoustic, opening for him. And while I wasn’t playing with him I would sell his merchandise. I got to see all sides of travelling. 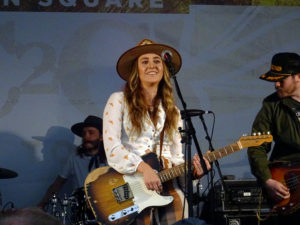 You describe your music as “Bell-Bottom Country”. Where does that come from?

When I was probably about 11 years old I had this pair of blue leopard bell-bottoms from Limited Too that I was absolutely obsessed with, and I like to think that I’ve always kinda had a free spirit, laid back kinda vibe. That’s also what I want my music to portray. I was thinking about, what is something I love and what is something I can do different, something that kinda stands out and sets me apart a little bit. And I was like, hey, what about some bell-bottoms and (laughs) not brushing my hair – that’s pretty easy!

Oh my, that’s a big question. I think it comes from me. I think it literally just starts like, you know, right here. I’ve always just kinda done what I wanted to do, and I’ve always tried to portray that free spirited, “I don’t really care what people think” kinda vibe, and that’s just truly who I am. I can’t be anything else. So I think, honestly, it was almost like, “This is who I am” and the style just kinda fit and kinda matched. It went along right with my music, because I feel like my music also says things that might make you cringe a little bit but you’re like, “Hey, she’s telling it how it is”, so I’m saying what everybody’s thinking!

You released your 6 song EP last year, and now you’re going into the studio with Jay Joyce to produce a new album. How did that come to happen?

Oh, man! So, when I signed my record deal with Broken Bow Records, we sat down and talked about who I was interested in working with, and I said, “Well, I’m sure everybody says this, but I’d love to work with Jay Joyce”. They were like, well, we can see but he’s never worked with anybody over here and, blah blah blah, but before they even had the opportunity to reach out to him we had already got connected. I told Jay Joyce, “You made me look a lot cooler than I really am” (laughs), and he loved that. The day that we land back in Nashville, on the Monday after C2C, we go straight into the studio for a brand new album.

So a little early to be talking about release dates then?

Yeah, we’re going to try to get the music done and go from there. It’s really hard to have any kinda release date in mind when it’s not done just yet.

Do you have all the songs ready to take into the studio?

We have about 20 songs that we’re set on, and we’re going to try to get all of those recorded and then kinda dwindle those down.

Listening back to your first album, “Tougher”, and then listening to your EP, it feels like you’re a little bit looser in yourself, a little more relaxed in the studio perhaps. Is that a fair observation?

Yep, it is. I feel like every single day I’m finding who I truly am even more, and it’s thankfully coming across in my music. I feel like the EP is who I’ve been all along. It’s just, sometimes it’s hard finding somebody who can also help you find that. Aslan Freeman produced my EP, he’s a good friend of mine. All the songs on the EP started out as demo’s, and we just decided to mix and master and do all that, and go on and put it out. I feel like it’s a step, you know, in what I’m trying to represent, the sound that I’m trying to represent. I feel like the Jay Joyce record is going to be even more of a representation of who I am.

I know when I saw your set yesterday in the Town Square, and you were straight into “Workin’ Overtime”, you’d got the same energy in the EP that I saw on stage. It was great to hear that you were capturing that in the studio and putting it across live, too.

Thank you, I appreciate that very much.

I think it’s fair to say there were a lot of people really looking forward to seeing you perform this weekend, you’re on a lot of people’s must-see lists. Have you spoken to anyone prior to this weekend who has told you what you should expect from the audiences, and also from the event itself as a whole? Or have you come completely blind?

Completely blind! (laughs) Really, I can get up every single day and look at my calendar and I’m like. “What’s going on today?” and thankfully my manager, Mandelyn, she’s keeping it all together for me. It’s almost one of those things like, right before I go in to whatever I’m about to do, she tells me a little bit about it, because if you’d told me yesterday, we’ve got so many things going on, but it’s exciting, yeah. I’m going in a little bit like, I don’t know what’s going on but I’m doing it.

What’s next on the horizon for you?

Man, well, after we get the record done, and we’ll be in the studio for a whole month doing that, pick the single, and that’ll be going to radio in a few months, I’m hoping. Then, we’re not exactly sure how we’re going to do it just yet, after we get the music done we’ll probably know, but we might release a couple more songs off the record, and then release the record. But this is something I’ve been working really really hard for, and I’m excited to bring it to life.

So you’ll be fully concentrating on the studio for that month, with no live commitments in that time?

Yes, yes. So for the whole month, for March 11th to April 11th I will be in the studio, with my head down, trying to do the thing. No shows, no co-writes, which is going to be really weird for me, because I can’t tell you the last time I’ve gone a day without writing, so… 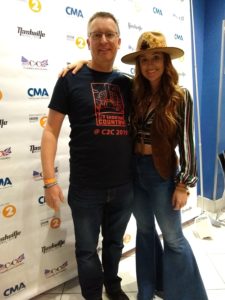 Check out more of our Country2Country 2019 coverage on our dedicated page!

2 thoughts on “Lainey Wilson Interview: We Sit Down at C2C With the Songwriter to Discuss Touring with Morgan Wallen, New Music and More!”