Ashley McBryde Country2Country Interview: We Talk About Her Impact in 2018, Handling Social Media the Right Way and Much more!

Every year it feels like there is a breakout artist on the stages at Country2Country. 2018 was most certainly the year of Ashley McBryde, everywhere you went in London you’d hear people talking about her powerful performances. We were treated to even more when she headed back with Luke Combs in support of his headline tour. Now, just 12 months after she first played in the UK, Ashley is on the main stage at Country2Country. We sat down with her in Glasgow for a chat before her set. 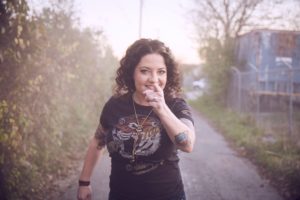 Ashley, welcome back to Glasgow!

You’re here opening the Country 2 Country Festival in Glasgow before heading to Dublin and London, are you looking forward to the next few days?

I’m really looking forward to it. I’ve been here for… we came 2 days early to do a bunch of media stuff, that stuffs fun too but now it’s time to do the thing we came to do.

You played C2C last year but only in London playing some of the smaller stages there. Now 12 months later, Main Stage in 3 countries ….

Yeah, it’s incredible. It’s crazy. I was hoping I’d be able to come back 2 years in a row but to come back the second year and do the main stage … The reception last year was amazing.

You were over in October with Luke Combs, then it was just you and your guitar but this time you have the full band with you?

Yeah and I love it with just me and my guitar but also, we’re so excited for tonight. I’ve told my guys over and over that it’s going to be amazing, these fans, but as much as I’ve told them over and over, they’re still not prepared.

So, can we expect a completely different show?

I think so. When it’s just me and my guitar I come out and try to introduce myself as opposed to kicking it in the teeth, the band show is a little bit harder hitting right off the bat. It’s still my show but we do kinda come up and shout ‘HELLO’, then back off and go from there.

I loved your set in Glasgow, loved the way you really connected with the audience and, as cliché as it sounds, it really did look like you gave absolutely everything that night. You said you had a bad chest cold and you were going to give us everything you had and you definitely did that. It was just you and your guitar telling stories ….

Yeah, we did 12 shows here with Luke in October, turned out when we got home, I had pneumonia so that’s why the cough was so bad (laughs)

Well if that was you with pneumonia, I’m looking forward to fully fit Ashley tonight!

So, the storyteller, singer, songwriter, do you like performing that way?

I love it, its my favourite. There are some times, especially in festival settings in the states, where you only get 25 minutes and its just song, song, song – off the stage. For me it’s really important to connect with everybody and make them, no matter where they are, feel like they are in my living room.

Do you see yourself as a songwriter that sings or a singer that writes songs?

I’d say a songwriter that sings, 1000% I went to Nashville to write songs. I loved performing and playing in bars but that’s the reason I moved to Nashville, to be a songwriter

The reaction when you were over with Luke, the social buzz afterwards was incredible. I’ve genuinely never seen it going as crazy!

It was so much fun.

Did you expect that reaction?

I knew after playing London for C2C, all 3 days last year and coming back in 6 months and finally being able to come to Glasgow, that there would be some type of buzz. Luke and I are a really good pairing together, it sits really nicely but it takes you back every bit as much as it did my first time playing in London. So, I knew there would be some type of reaction, but I didn’t realise it would be that big

Superb, when we’re talking about social media … Your Instagram …. I love how honest and open you are. All faked up in particular is brilliant.

I never miss it, Dayna (Dayna Slaughenhoupt, Ashley’s make-up artist) and you, it’s like a sitcom …

Dayna is here tonight. I got stressed out earlier, you know when woman get frustrated it comes out sometimes as tears? So, I started to tear up and she was like, “are you ok?”” and I was like “I’m fine, my eye make-up looks good, don’t touch it don’t touch it” So yeah, she’s a hoot!

That direct interaction with the fans, do you enjoy that?

You’re putting it straight, it doesn’t get filtered, it’s just you.

It makes me feel better because, being a Country artist, there’s a certain amount of celebrity that comes along with it and I like to make sure that, well, you get to see the polished part, walking around on stage with perfect make up, but what you don’t see is that one of us is hungover this morning or one of us has pneumonia or the fact that I have jet lag so bad that my eyes are puffy and Dayna paints that away, I think it’s a cool thing to do to be completely honest like that

(Laughs) I was playing a roof top show in Nashville and I went into the green room and there was a small Terrarium it had a little plant and a little tiny dinosaur in it and I went “ooo a tiny diny” and then I was like “I need to have my own tiny dinosaur” and that grew and now it’s all other animals. It’s great fun.

You’ve announced that your coming back over in September for your headlining tour, are you excited about that?

Yes, some of these rooms will be the biggest attendance rooms that we’ve ever played as a headliner.

Will it be acoustic or full band?

Your album ‘Girl Going Nowhere’ has been a massive success, has the reception to that been beyond what you expected?

Absolutely, especially the track that gave the album its name. All the songs on the record that I thought would get big responses, got the responses I thought they would get. The one that snuck up on us was Girl Going Nowhere. When we wrote it, it was special to me and it was special to Jeremy that I wrote it with and its special to the band. It’s kinda our moment together when we remind ourselves that once we were small and now, we are growing. It touched other people’s lives in a way that I didn’t expect. I had a little girl in Kansas come up to me at the record table and tell me she wanted to be a girl going nowhere. Which means I’ve taken a negative thing and made it a positive and now a young person wants to follow that – pretty cool.

You got nominated for a Grammy, how did that feel?

It’s actually impossible to feel it. It just seems like it wasn’t true. They were like “You got nominated for a Grammy” and I was like, “Say that again, say it again!!” I called my mom every morning after id been nominated and said ‘Mom I’ve been nominated for a Grammy.” She said “I know, you told me yesterday.” I said “I’m going to say it every day until I get to the Grammys to make sure it’s real” and it really wasn’t real to me until I sat down at the Grammys, I’m all dressed up, and the gentleman in front of me turns around, stands up and says, “Hi I’m Quincy Jones” I said  “I know exactly who you are” and we watched the entire show together and chit catted all night. It was amazing.

Have you got any new music coming or is it a bit too early yet?

Oh, there’s new music coming. It’s probably in this room on one of these devices. I spent most of January writing. I’ll do a little bit more writing in April, but we’ve also had this pile of songs from the day we finished the first record that we’ll keep sifting through. We start recording I think May 4th and It’ll probably be next spring before it comes out.  We will spend the second half of April working the way we did the first record, the way we’ve been for 6 and a half years, a band in a garage. We’ll rehearse these songs to see what they feel like to us before we take it in to polish it.

As well as conquering the world with your music, you even found time to appear in a movie?

(screams) How crazy is that?!

Sorry I get super excited about it.  The very first time I came over here, overseas, I’m asked will I appear in a film?  “Well ok, what’s the film?” “Well it’s called Wild Rose and it’s about a girl from Glasgow and she really is a lot like me.” So, I’m like “absolutely” but I was worried, you know, like how many lines is it? What am I going to be doing? They said don’t worry, you only have to play yourself. So, I got to meet Jessie Buckley and Bob Harris for the first time that day while we were filming, so when you see the film and you see us all kinda wide eyed and standing back and shaking each other hands, that was the actual moment we got to meet.

Was it difficult to play yourself?

It wasn’t (laughs) I’ve been doing it for so long, but it was very interesting with cameras in the room to play girl going nowhere. Jessie hadn’t heard the song before on purpose so that when she heard it, it was a true reaction on camera. I was watching her as I sang and it got to that hook the first time, and she sat back in her chair. It was just her reacting to me, me reacting to her and that was a really big moment for me. Also, I didn’t know there was a Grand Ole Opry in Glasgow, I wish I had visited it.

They still do gun fights and the whole Western thing.

Dressed up in the full western outfits and everything…

Come a day early in September and we’ll go!

I’m down for that!

The main goal is to get the second record, get the bones around it, figure out what it’s going to be like. So just a little bit more writing to do. Then we’ve got 7 shows in total in the States with George Strait, most of them in Vegas, one in Atlanta. Playing Vegas is always fun but playing with the King of Country Music is humbling and it’s also a “You got to put your big girl pants on” kind of a moment. I’m really concentrating on that. Festival season, of course, is always a blast. My main job though is that we gotta get the second record right to prove that record one was not an accident.  So, it’s a little bit of pressure but I’ll try to shake that off.

Ashley thank you so much for speaking with us at Six Shooter, I can’t wait to listen to you tonight and can’t wait to hear the new music later in the year.

You are very welcome, thank you. 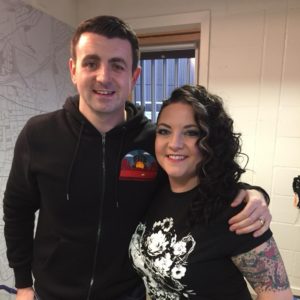 For more coverage, reviews and interviews head to our C2C 2019 section!

One thought on “Ashley McBryde Interview: We Chat Before Her Main Stage Set at Glasgow Country2Country”