RaeLynn Country2Country Interview: We Chat to RaeLynn About Playing the UK, Touring With Kane Brown and Her Return This Summer!

If you want a fizzing, firing country music party, then RaeLynn really should be on your playlist. She’s great fun to be around, with a real sparkly character – just as I found out when I sat down with her at C2C Country 2 County at the O2. 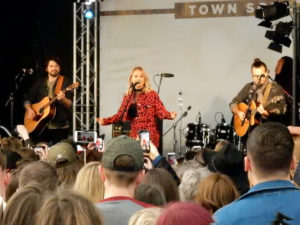 Hi RaeLynn, good to meet you! Is this your first time performing in the UK?

Yes, performing in the UK. I came one time for 48 hours as a visitor, but it was more for work. We flew in in the morning, did some touristy things, had dinner that night, then a meeting the next day and flew out. So, it was a very fast turn-around.

So, before you came over this time, did anyone tip you off with what to expect as a performer?

Well, they told me it was a listening crowd, and I realised that very quickly. My first performance was on Friday. One thing I really appreciated about the crowd that’s different from the US is that they scream right when you get outside, and then you start performing and they get real quiet. And that’s not normal in the US, everybody’s like “RAAAGH!” and then when you’re performing, if they like it they’ll yell “YEEEAAHH!” and they’re really loud. I appreciate that, but it was a little bit of a shock, like, “Do they like me? Do they not? I’m not sure!” But yeah, I love that.

In the UK, sometimes if the crowd are making too much noise during a performance people will turn around and tell them to shush, because we want to listen.

You’ve been touring recently with Kane Brown. That must have been great, because he’s really hot at the moment. How have you found that tour?

Yeah, I love Kane. That tour was a really great tour for me, because Kane is very young, and we have the same fan demographic. I’ve done a lot of tours but his fan base was so much fun, and the crowd was so awesome, and it really worked and responded really well for me. I love Kane and his team so much, I just love his story of how he became an artist and I think it’s a story that should be told more. I mean, he was just in his bedroom playing covers and is now one of the biggest stars in country music. That was such a great tour for me.

Your recent tracks, such as “Tailgate” and “Rowdy”, would have gone down really well on that tour with the audience demographic. Those 2 tracks in particular seem very characterful in presenting your personality. Is that a deliberate decision in your writing at the moment?

Yes! Anyone who meets me, they’re always like, “God, her personality, I just wanna put it in a bottle and drink it!”. Whatever it is, it’s a lot of energy. I didn’t have a lot of songs that showcased that part of me and I felt like, when it came to writing for the new record I was, like, I want to show more of my personality on this record. I wanna show my personality in a room and what it’s like to be with me, and I love to have a good time and I was just, I want to capture that, whatever this is, into a song. And so that’s what we’ve been working on.

They’re definitely great party tracks and they really make you want to get up and dance, so if that’s what you’re trying to get across then you’ve definitely succeeded.

You just mentioned a new record, so these aren’t standalone tracks?

Just to change the mood a little, when you’re performing a song like “Love Triangle” that is equally personal but in a very different way, how do you manage to separate your performance of that song from your emotions, and indeed the emotions in the audience? Because that song in particular has really found a connection with people, hasn’t it?

For sure. I think for me it’s always in my mind that this could be somebody’s first time to hear this song. It’s really easy to get burned out with the material that you’re singing night after night after night after night, but there will still be a moment where… I mean, there are some nights where I can sing that song and be… You know, I always have emotions when I’m singing that song because I love it so much. There are some nights I can sing it just straight and be fine, and there are some nights where I see a fan crying and it just hits me, and I’m like, “BLARGH! I can’t finish this anymore!”, you know? But I love that, because that song is 6 years old since I’ve written it, and the fact that it can still hit me like that goes to show that, that’s why we’re in music. Great songs never die, they’re always there. I think that’s something to always remember, and that’s definitely one of those for me.

When your experience connects with someone else’s experience, through a song you’ve written…

Now, you’ve played 2 sets so far at C2C –one in the Town Square and one on the Radio 2 Stage in the Indigo. They’re 2 very different venues. Did you have to alter the approach or presentation of your set for the differing venues?

Well, they are very different venues. But no, we just do the acoustic version of it in the Indigo. I talk a little more, so that’s the only difference really.

I know myself that the Town Square was absolutely packed!

Oh my gosh, it was so packed in there! I was so shocked at the Indigo, because it was packed at the Indigo and it was packed at the Town Square, and I was like, “Oh my God, they like me, thank God!” It’s nerve-wracking, you know, coming over here I was like, “I hope somebody comes!” I mentioned earlier that I’d come over before for a meeting, and just randomly I thought, “I wonder if I have any fans here?” I mean, I know I do, but you don’t know how many. So, I had some time to kill, and I was like “Meet me at this Café Nero, in 2 hours I’ll be there”. This is such a funny story because, I didn’t realise there were 2 Café Nero’s close by. So, the one that I told people to go to was wrong. There was one in a mall, it was like 0.2 miles away. So, I’m like walking and there’s no-one in this Café Nero, and I’m like, “Shit, nobody came, this sucks”. And then, there are these girls that were like giggling, and it was like they didn’t want to come up to me. So I went over to them, and we were both trying to figure this thing out. I’m like, “Do you know who I am?”, and they were like “RaeLynn! Yeah!” And they were like, “Everyone is at the other Café Nero, and they wanted us to come over and see if you were here!” and it all got mixed up. I’m like “How many people are there?”, and they say, “Ahhhh, like 50?” So we walked to the other one and they were all there and I was like, “Oh thank God!”, and it was so funny.

Now, you’re also playing the aftershow party tonight (Sunday), again in the Indigo. How does it feel to know that you’re basically closing the festival?

I know! It’s incredible! Hey I’m down for it! I’m excited, I hope a lot of people come. I hope they won’t be too tired. I think that they’ll be there because, it’s like the last hurrah. It’s like, “It can’t end, we still wanna party, let’s go see RaeLynn”, and I want those people there. I want the ones that have partied their butts off all day, and let’s have a good time. I think it’s gonna be awesome.

You’re coming back later this year, on tour with Maren Morris. That must be very exciting to look forward to?

I am so pumped! I first of all cannot wait to just travel, and we’re going to Amsterdam, Berlin, Switzerland, Ireland… We’re doing it all. For me, it’s just one of those things that’s kinda like, it’s such a blessing to be on tour with such an incredible artist like Maren, and I know I’m gonna learn so much. I really appreciate that she’s taking a stance for women in country music, and she’s putting this on, and I’m pumped.

I think, like Kane Brown, you share a lot of audience demographic with Maren, a lot of word will get around about you from your performances here at C2C too and I’m sure you’ll get a great reception on that tour.

What a great venue to come over and play.

For more coverage, interviews and reviews, head to our C2C section!