Michael Ray Interview: Before He Kicked Off His UK Tour for the Country2Country Festival We Sat Down for a Chat!

One of the amazing things about the Country2Country Festival is the amount of artists we get over in the UK for the first time. Michael Ray was just one of those artists in 2019. After the success of his 2018 album ‘Amos’, and a subsequent ACM Award nomination, Michael Ray is certainly riding a wave of good times at the moment. We were lucky enough to sit down with him before his shows in Glasgow at Country2Country! 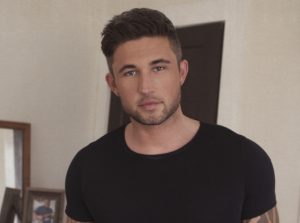 You’re here in the UK as part of the Country 2 Country Festival, that must be exciting?

It is yeah. This is my first time at C2C and my buddies like Drake White, and other friends of mine who have come over here before were like “Dude, wait to you go over there man, you just feel so at home” My dad called me before we flew out and he was like “I’m so mad” I go “why?” He goes “Scotland and Ireland are the 2 places I’ve always wanted to go” and I go “We’re kicking it off in Scotland (laughs), I’ll take some photos and send them back” It’s cool to be here.

Is this the first time you’ve played in the UK?

What are you expecting from the UK crowd?

Judging from what everyone has told me, my buddies have said they just make you feel at home, and “man you’re gonna be surprised with the songs they know, they know everything!” In a world where it’s so single driven and not so much album driven, its really cool to see fans, like the UK fans, that just dive into a whole body of art and not just one song at a time. For us, when we make a whole album, we hope that everybody listens to the whole album cause I feel like that’s when you really learn the artist your listening to, not necessarily what you hear on the radio but really dive in and get them B Cuts. I have a feeling that we’re gonna be shocked and surprised about how many songs everyone knows here.

Yeah, they got us all over (laughs)

Will you get any downtime to take in any of the festival or will you be too busy?

I think seeing everybody backstage and in the halls are were the hangouts are gonna be for us, but we done that very intentionally with this being our first time over. I feel like the last couple of years we’ve seen the growth of my fanbase here. People have been reaching out saying “are you coming over for C2C” or when are we coming to Scotland or Ireland or England or wherever that may be so, when we met up with the C2C festival people, I said that this was my first time over here so I wanted to do as much as possible because I want to come back, I want to keep growing. I wanna come for C2C but I want to be able to come back on my own to play some shows too. I’m a new artist over here and I wanna approach it like that and play as much as we can. They took me serious on that (laughs)

It certainly sounds like they did. 2018 seemed like an interesting year for you, I saw that you described it as being “Defining”, how has the journey been?

It’s been great man. I think when you look back on life in general, when you get older, you start learning that you have certain years that just seem like a struggle. We all have them. It doesn’t matter what you do in life, but you can just have that year when you feel like you’re just not connecting, somethings just not right. You feel off, stuff kinda just hits you outa nowhere, life throws you curves. I feel like that’s kinda setting you up for what’s coming. I really just feel like last year was my year of that. My life changed dramatically, professionally and definitely personally, and that’s what’s made this year (2019) already the best of my life so far and we’re only three months in.

You were out on the road with Old Dominion?

Incredible man. When you can combine touring with a band that you’re a fan of and they just happen to be like brothers to you. I didn’t go to College but that has to be what a fraternity feels like. You’re on the bus and out on tour and you kinda get lost in your own little world for three or four days a week and just shut off the whole world. It’s like this brotherhood. Being able to learn from those guys, sit side stage, write with them and hang with them, it can’t be beat and I feel very fortunate they brought me into their world.

You seem to have formed a real connection with the guys, most of them have writing credits on your album?

Yea, Matt, Brad and Trevor. They’re good enough that even the songs they don’t cut are hits so they help us out. When we’re trying to write songs for the record but we’re just missing it a little bit, before I dilute my record for my ego, we’ll always reach out to the songwriters. Luckily, I have those guys on my call list.

If you could pick any Old Dominion song to be yours, what would it be?

‘Still Writing Songs About You’. I love it and it makes me mad at the same time cos I’m like, why didn’t I write that. Every night on tour, If I couldn’t get out front for their set starting, I would always make sure I was out for that one where they would break down this incredible acoustic thing. If there’s one song I’m jealous of its that one.

You even found time last year to get engaged!

Yea (laughs) somewhere in the mix of everything.

Carly’s (Carly Pearce) over for C2C with you?

She is, she’s actually in Ireland right now.

Will you get to share any of it together?

We’ll pass a little bit tomorrow before she moves on but then we fly to Australia together. This is both our first times over here so we’re both playing as much as we can and taking advantage of the opportunity y’all have given us. We knew it was gonna be a busy few days, Thank God for Facetime.

You’ve just started your Headlining Tour “19” in the States, how’s that going down?

It’s going great man, we’re playing some places we’ve been before and the crowds are way larger than even last year and we’re playing places we’ve never been before and we’re selling out. To hear the fans sing every word to us and to hear their stories and really just watch my growth and watch the fans growing with me. They’ve allowed me the years to grow. It’s cool. We get to play every song on the Amos record, to go back to the first record. We get to throw some covers in, but covers that mean something. I’m not gonna throw in covers just to have them. The Covers that we are doing are kinda telling a story of the last couple of years. 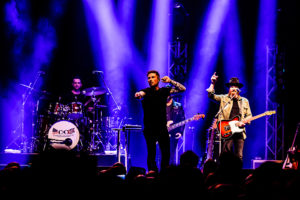 Is that properly living the dream?

You’ve also been nominated for an ACM Award?

Yeah man, my first time. It’s nuts. I’m originally from a small town in Florida. My family had a band, my Grandpa, my Dad, my Cousins and my Uncle. Growing up, watching the ACM’s was kinda like the Superbowl every year for us. We’d never miss one and keep a track on who won and stuff. To finally have worked hard enough in my career to be in a spot where in getting the attention of the Academy people, my peers and people in Country Music, that means a lot to me. To be nominated in a time that, and I mean it was stacked this year, it wasn’t an easy nomination. It gets said so much it probably gets diluted, but it’s true, just to be nominated, you feel like a winner, especially this year. It’s been cool man.

M: We’re doing a lot of festivals. We’re lucky to be over here for C2C, Australia for CMC and then a lot of big festivals in the United States. I’m continuing to headline the “19” Tour and planning a wedding. Thank God for the Moms involvement to help us both out (Laughs) It’s a busy but very grateful year and I feel like we’re reaping the benefit of a lot of stuff we’ve been sowing over the last couple of years.

Carly’s been nominated for an ACM too, are you planning a big party for when you both win? (laughs)

Haha, I told her we might stay in Vegas for a little longer than we’re expecting. When we both found out about our nominations she happened to be in New Orleans and I was back home in Nashville. I was with my trainer in the Gym and my manager sent me the link to see when Reba was announcing the nominations. So, I watched on my phone and me and my trainer freaked out and I immediately booked a flight to New Orleans. I met up with her and that night we hung out. The next day I flew to DC and she flew somewhere else but we fit it in where we can (laughs).

Michael, thank you very much for taking the time to talk with us

Have a great show!

Awesome, thank you, appreciate it buddy! 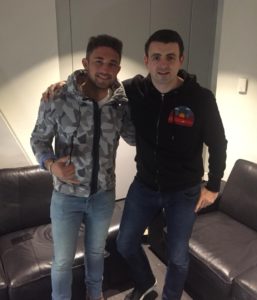 For more coverage, reviews and interviews head to our Country2Country Section!