Jimmie Allen Interview: We Catch Up at C2C to Discuss His Desire to Play Music and Much More!

Having won plenty of new friends and fans following his C2C debut at the CMA Songwriters on Thursday night, the following day Jimmie Allen sat down with Six Shooter Country’s Alison Dewar to talk about his highlights of the night, why he never has a Plan B, and why you have to be honest with yourself and your friends. 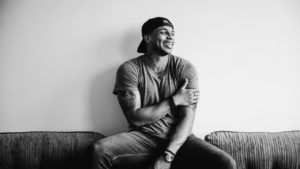 Last night at Songwriters, Ross Copperman said he didn’t know country music was so popular here. What did you feel about that and where has he been?

I knew a few artists who have come over before and they told me about it, plus I was over in October with Chase Rice. I had heard the fan base was great and I was just looking forward it, counting down the days.

Talking of Songwriters, for me it was almost like gatecrashing an old friends’ party, there was so much banter and energy. How was it for you?

You know, I’m away 25 days a month and no-one’s ever home at the same time. When you are home, the last thing you want to do is go and meet someone for a drink. We do writers’ rounds and a lot of radio stations in the US have guitar pools – 5 or 6 artists on stage and that is where we see each other and hang out.

What were your highlights from the evening?

My favourite parts were two moments; when Cam told the story behind Burning House and when Laura (Veltz) sang Live Forever.

When you went upstairs into the crowd at the Indigo, was that a spur of the moment decision?

Totally, everything I do a lot of the time is spur of the moment and very random. I saw my guitar player had a cordless mike and I leaned over to my manager and yelled at him and said I’m going up top, call the sound guy.

Taking a step back to the early days, it took you 10 years to become an overnight success and you’ve talked a lot about the different jobs you took on. Did you ever have a plan B?

My grandmother told me years ago it’s impossible to put 100% into 2 different things because one of them will always suffer. I don’t really believe in having a plan B, if people say they want to be a schoolteacher or a doctor, they don’t have a plan B, they stay in school until they become one. I felt like that about entertainment.

If you have a desire and a talent, you do what you have to do, I call it putting in your college years – four years at college, then a couple at grad school then, if you were a doctor, you’d do a residency – so that’s like 8 or 9 years.

If you want to be an entertainer or actor you have to step out of your comfort zone. You have to move to whatever city that is prominent in, so you can chase your dream. If you don’t, there are other people who are doing it – you’ve got to chase your dream, get out there to wherever, meet people, and work on your craft at the same time.

There comes a time of honest reflection, when you sit back and realise are my songs good enough, am I a good enough singer, you have to be honest with yourself.

One of my best friends was delusional for a while, he said to me: “Jimmie, I want to be a singer”. I said to him: “Bro, I love you, but you are the worst singer I have ever heard in my life.”

I told him, you are my friend and I’m not going to sit here and lie to you and tell you you have a chance of being a singer, I’m doing you a favour down the line. It would be like me trying to build someone’s house, I know nothing about construction, and I know I’m not good at it.

I have a friend in Delaware who wants to be a rapper, I told him he had to move to LA but he ain’t left Delaware yet. He says he’s waiting for someone to reach out but I said nobody ain’t gonna reach out, he asked me to make a phone call for him, but I said why would I reach out for you, if you’re too lazy to do it for yourself.

And finally…I read in another interview that you always carry $2 to give to someone, as you know how much it meant to you when you were struggling. What’s the best thing someone’s given you?

The best thing someone’s ever given me was probably my manager Ash Bowers – he gave me to the opportunity to play my music.

That’s pretty impressive. We’re glad that he did.

For more coverage, interviews and reviews head to our Country2Country 2019 section.

During the weekend, Jimmie also played the CMW Hub, C2C Sessions and, on Sunday night, took his turn on the Spotlight Stage, where we shot these photos. 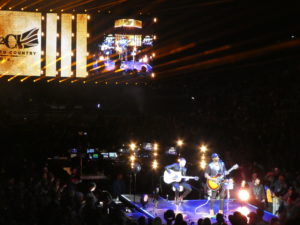 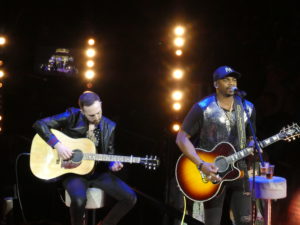 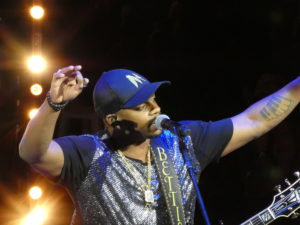