Sally got chance to sit down with Noah Schnacky at Country to Country to talk about where his love of country music came from and what tune he woke up to every day as a 10-year-old! 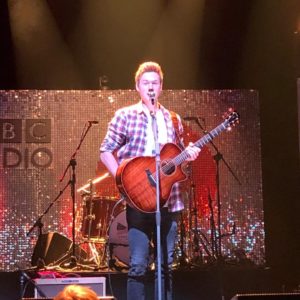 It was great, I was thinking “I’m going to stay up all night” so I could sleep on the plane, we got on the plane and there was only one empty seat, and it was next to me. It was the coolest moment so I laid right down and fell straight to sleep. I slept the whole way! It was amazing!

And no doubt you’ll sleep all the way back because you’ll be exhausted?

We don’t go back home, we’re going to CMC Rocks in Australia, and then we’re headed to Italy! At some point in mid-July I think we land somewhere in a time zone that makes sense to me. My brain will be all over!

What got you into Country Music?

I grew up on country music, my dad liked it and wanted to get into it. He got married at 19 and when he was 21 he moved to Nashville by himself, people thought he was crazy. He wanted to try and establish himself there, and then bring the family out there. Through the course of time God led him down a different path and brought him back home. But he never gave up that love. It used to be my alarm clock waking up, I had guitars on my wall and when I needed to get up my dad would come in and play guitar and sing some old Kenny Chesney or George Strait, it went from just being an alarm clock to me putting my head under the pillow and listening to the lyrics and thinking wow this is a beautiful story. I fell in love with country music and storytelling that way.

Yea it wasn’t bad! I mean when you’re 10 years old you don’t appreciate it so much, but slowly I started to appreciate it more. It went from my dad just waking me up to me thinking wow these songs are powerful and it showed me the beauty of country as a genre. No shame to any other genre, but there is something so beautiful about the storytelling of country music and when I started to write my own songs like ‘Hello Beautiful’ I couldn’t help but want to write those stories. That’s kind of how I fell into it, from the bedside to the songs we listened to in my dad’s work truck, to now. I love everything about what I do!

You touched upon your song ‘Hello Beautiful’ let us in on the secret, who’s it written about?

That’s an interesting one, I’ll tell you the truth. I was just about to end my first relationship of two years; a real relationship! It was slow dancing in the burning room, and we knew my life was getting more crazy and hectic and her life was moving down a different path, and she said one time in the car, maybe one day we’ll fall back in love in a coffee shop 10 years from now. And I loved that idea, it gave me a lot of peace for the situation, I never stopped mulling over that and it sat at the back of my mind. I paired that thought with another concept in my mind of always being on my own. Even before that, my whole life, I grew up by myself, I was on the road and it was crazy because when I started writing songs it gave me that outlet to write about what I wish I had in a relationship, and what I’d never had myself. It is a lonely road if you’re not careful. And so I took that little bit, and blew it up. I made it into an over exaggeration of what could have been a moment, and turned it into a beautiful moment of a guy falling in love with a girl and a girl falling in love with a guy, not because of who they are, or how many Instagram followers they have, or what they look like, or what successes they’d had in the past, but just out of sheer luck and coincidence of a conversation that lasted a little too long in a coffee shop on a random Tuesday.

Instagram was where you built your success posting cover versions of many well-known songs, is there any covers that you haven’t done that might surprise fans that you’d like to do?

You’d be surprised of how diverse my library is, it’s crazy. I’ll go from listening to Taylor Swift’s ‘Speak Now’ album straight to listening to ‘Clair de Lune’ by Debussy straight from that to The Killers and Green Day, and even listening to Tupac. I love so much, I love figuring out what it is people love about specific songs, I feel like there’s a happiness in every song you’ve just got to be able to find it. There’s a mood and a time for everything. I’ve never really thought about it, but if I could cover anything maybe doing an instrumental piece, like a Debussy song, in the middle of an album, something crazy like that as an interlude, could experiment with that a lot.

So this is a pretty big weekend for you to be overseas for the first time, and to be on stage at Country to Country is a pretty big deal! Are there any artists that you’re looking forward to seeing whilst you’re here?

Oh my gosh, well I heard that Brett Eldredge was incredible last night and Keith Urban was fantastic. I’m just so excited to see so many, this is just an overall incredible festival but we don’t get much time. Our days are so overloaded, I mean we released our song and one year later we’ve got over 15 million streams and we’d signed to Big Machine, things are just kind of going at a crazy speed, so we’re trying to make the most out of this trip, and I think later tonight we might have a little bit of free time to go see some shows. Because you’ve got to remember you’re a fan of it first, and if you can’t enjoy it, then what are you doing!

Thank you so much for giving me time to chat to you today! 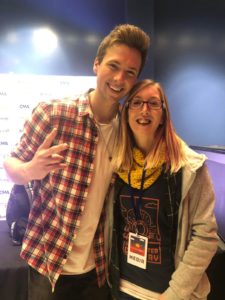 For more coverage, reviews and interviews from Country2Country 2019, head to our special section!